VIDEO: RTA honours four drivers for honesty and their services 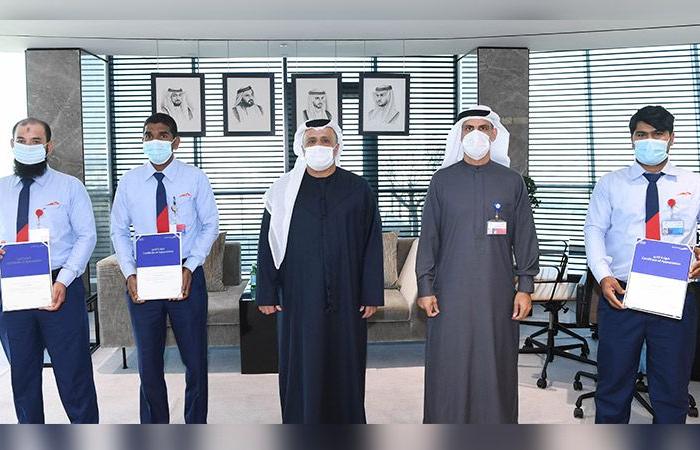 Hello and welcome to the details of VIDEO: RTA honours four drivers for honesty and their services and now with the details


Mattar Mohammed Al Tayer, Director-General, Chairman of the Board of Executive Directors of the Roads and Transport Authority (RTA) honoured four drivers of RTA’s public buses and taxis in recognition of their honesty and good morals in dealing with the public.

The felicitation was made in the presence of Ahmed Hashim Bahrozyan, CEO of Public Transport Agency, and Mansour Al Falasi, CEO of Dubai Taxi Corporation.

Al Tayer thanked honourees for their dedication to their jobs and portraying a fine image of themselves and the RTA. He noted that etiquette and manners exhibited by employees would always have a positive impact on the workplace, rendering them role models amongst fellow employees.

“We pride ourselves on having employees with such integrity and morals in the RTA. The four drives conducted themselves properly in dealing with the public, be it in upholding the principles of integrity or lending a hand to people in need. This sort of conduct underscores our confidence in the loyalty, integrity and good manners of our staff in public transport means that lift thousands of passengers each day. Such a practice will boost the public confidence in using public transport and taxis in Dubai,” added Al Tayer.

Honourees expressed their thanks and pleasure with this special recognition from Mattar Al Tayer. They said that such a recognition would be a source of pride not only for them but also for all staff of the Public Transport Agency and the Dubai Taxi Corporation. They noted that this gesture would motivate others to make more dedicated efforts to bring happiness to riders of public buses and taxis. They concluded that what they had done was driven by their ethics and constituted part of their duties.

The driver, Firos Charupadikkal, from the Dubai Taxi Corporation, took immediate action to secure and handover a bag containing valuable items to a tourist who left it behind in the taxi. The three bus drivers Hassan Khan, Aziz Rahman and Hussein Nazir took the initiative of helping a lady whose vehicle broke down on the road and replaced a defective tyre.

These were the details of the news VIDEO: RTA honours four drivers for honesty and their services for this day. We hope that we have succeeded by giving you the full details and information. To follow all our news, you can subscribe to the alerts system or to one of our different systems to provide you with all that is new.