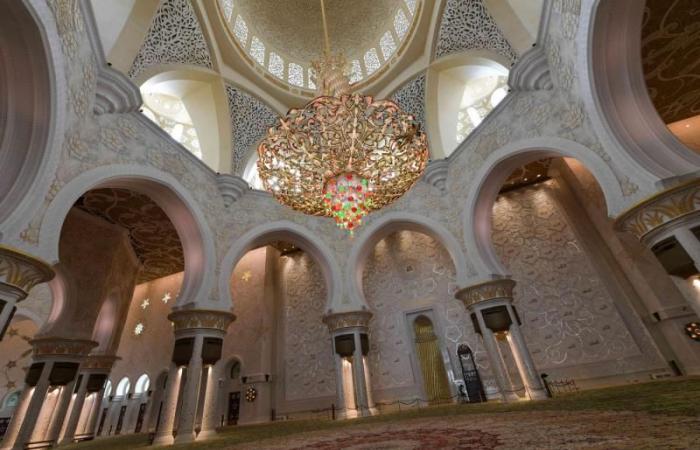 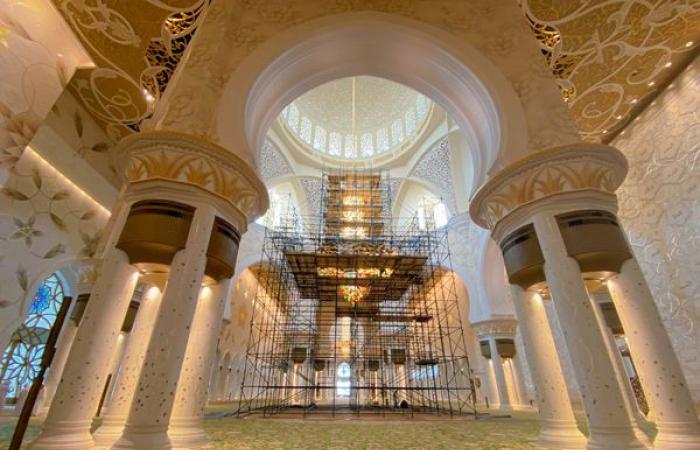 Hind Al Soulia - Riyadh - The Sheikh Zayed Grand Mosque is recognised as a premier work of Islamic architecture and attracts visitors and tourists from all over the world.

A view of the interior of the Sheikh Zayed Grand Mosque in the UAE capital Abu Dhabi. (AFP)

The chandeliers, which go up to 15.5 metres high and weigh up to 12 tonnes, are intricately designed to resemble an upturned palm tree, a key symbol of sustenance and prosperity in the emirate. They are made of stainless steel, covered with 24-carat gold plates and adorned with Swarovski crystals. “Nearly 40 million units of green, red, and yellow-colored crystal balls were integrated into the design of the chandelier, lending a special elegance to the entire prayer area,” said Emirati news agency WAM.

“The beauty of the chandeliers blends seamlessly and cohesively with the medallion and ornamental design on the hand-knotted magnificent carpet below – creating an integrated artistic ensemble,” it added. “The carpet with colorful crystal pieces hanging overhead resembles a vast stretch of water reflecting vibrant colors.”

The Sheikh Zayed Grand Mosque is recognised as a premier work of Islamic architecture and attracts visitors and tourists from all over the world. It is central to the UAE’s efforts to promote values of tolerance and coexistence, while also paying homage to its Islamic background.

The centre’s updated maintenance plan is part of efforts to ensure that the mosque’s beauty and vision is accessible to future generations.

“The maintenance of Sheikh Zayed Grand Mosque’s chandeliers is carried out as part of a strategic plan adopted by SZGMC to ensure future generations can continue to appreciate the mosque’s rich architecture,” said Salem Al Suwaidi, director of support services at Sheikh Zayed Grand Mosque Centre (SZGMC). “The chandeliers receive our special attention given their significance in enhancing the overall design of the mosque.”

Suwaidi added, “The maintenance of the chandeliers is performed in compliance with the highest international standards, as they capture the attention of a huge number of visitors every day. We are proud of the contributions made by our Emirati workforce in ensuring the timely completion of the maintenance work that demanded meticulous attention to detail, and adherence to highest international quality standards. Such efforts are crucial in maintaining the iconic status of this landmark that has in a short period of time become a key religious and cultural destination.”

These were the details of the news Sheikh Zayed Grand Mosque works to preserve iconic chandeliers for this day. We hope that we have succeeded by giving you the full details and information. To follow all our news, you can subscribe to the alerts system or to one of our different systems to provide you with all that is new.