Israel-Arab normalisation goes on with new US administration’s blessing 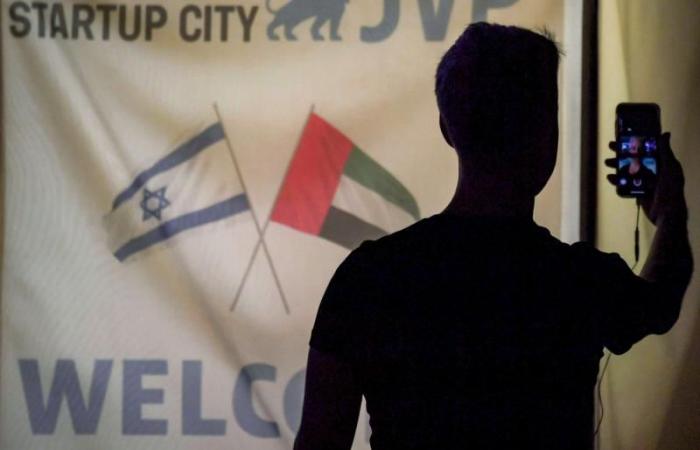 Hind Al Soulia - Riyadh - The Biden administration said it will work closely with Israel on regional security issues and to build on the country’s regional normalisation agreements, White House national security adviser Jake Sullivan told his Israeli counterpart, according to a statement.

A member of an Israeli tech delegation uses his phone in a video call during an evening meeting with Emirati counterparts at a hotel in Dubai on October 25, 2020. (AFP)

JERUSALEM – Israel is pressing ahead with efforts to expand new relations, following through on last year’s US-brokered agreements to establish full diplomatic ties with a number of Arab countries.

On Sunday, Israel’s cabinet approved a deal to upgrade ties with Morocco while the Jewish state’s foreign ministry announced the opening of an embassy in the United Arab Emirates.

The embassy is the latest in Israel’s diplomatic outreach to the Arab world, with a flurry of normalisation agreements and new deals with four countries over recent months.

“Today the Israeli embassy in Abu Dhabi has officially been opened, with the arrival of the mission head Eitan Naeh,” the ministry said in a statement.

“The Israeli embassy in the United Arab Emirates will advance relations between the countries on all levels.”

The UAE, along with Bahrain, signed a US-brokered deal in September to normalise relations with the Jewish state.

The agreements, known as the “Abraham Accords,” shattered a longstanding Arab consensus that there should be no normalisation with Israel until it reaches a comprehensive peace deal with the Palestinians.

The Israeli embassy in Abu Dhabi will be operating from “temporary offices” until locating a permanent facility, the foreign ministry statement said.

The mission will “expand the ties with the Emirati government, Israel and the UAE have already signed treaties on direct flights and visa-free travel, along with accords on investment protection, science and technology.

Israeli Foreign Minister Gabi Ashkenazi welcomed the move, saying the embassy would “enable the expansion of bilateral relations between Israel and the Emirates for a swift and maximal implementation of the potential in these ties.”

Ashkenazi also thanked the UAE “heir to the throne, His Highness Sheikh Mohammed bin Zayed, and my colleague and friend, Foreign Minister Sheikh Abdullah bin Zayed, for their leadership and hospitality towards our representatives.”

The foreign ministry announcement came shortly after the UAE said its cabinet had approved the establishment of an embassy in Israel, also a first.

The embassy will be opened in the coastal financial centre Tel Aviv.

Ashkenazi welcomed the UAE decision, which he said “will advance the warm ties between the states and peoples.”

Traditionally, most diplomatic missions in Israel have been in Tel Aviv as countries stayed neutral over the disputed city of Jerusalem until its status could be settled in an Israeli-Palestinian peace deal.

Former US president Donald Trump smashed that taboo in December 2017 by recognising Jerusalem as Israel’s capital and shifting the US Embassy there from Tel Aviv the following year.

Israel considers the city its undivided capital, but Palestinians see the mostly Arab eastern part of Jerusalem, including the Old City with its holy sites, as the illegally occupied capital of their future state.

Earlier this month, Sudan also signed the Abraham Accords, becoming the third Arab country to do so and the fourth to normalise diplomatic relations with the Jewish state in as many months.

Morocco also resumed ties with Israel in December, in a diplomatic quid pro quo that saw Washington back Moroccan rule over the disputed Western Sahara region.

Until last year, Egypt and Jordan were the only Arab countries to have recognised Israel, in bilateral peace deals struck decades ago.

Also Sunday, the Israeli government gave the green light to the agreement with Morocco, ahead of its final approval by parliament.

The Israeli foreign ministry said its mission in Rabat as well as its consulate in the UAE’s Dubai were due to open “in the coming days.” An Israeli embassy in Manama, Bahrain, has been operational for a number of weeks, the statement said.

Meanwhile, the Biden administration said it will work closely with Israel on regional security issues and to build on the country’s regional normalisation agreements, White House national security adviser Jake Sullivan told his Israeli counterpart, according to a statement.

“They discussed opportunities to enhance the partnership over the coming months, including by building on the success of Israel’s normalisation arrangements with UAE, Bahrain, Sudan, and Morocco,” according to a statement on Sullivan’s call on Saturday with Israel’s Meir Ben Shabbat.

Sullivan also extended an invitation to begin a strategic dialogue in the near term, the statement said.

These were the details of the news Israel-Arab normalisation goes on with new US administration’s blessing for this day. We hope that we have succeeded by giving you the full details and information. To follow all our news, you can subscribe to the alerts system or to one of our different systems to provide you with all that is new.