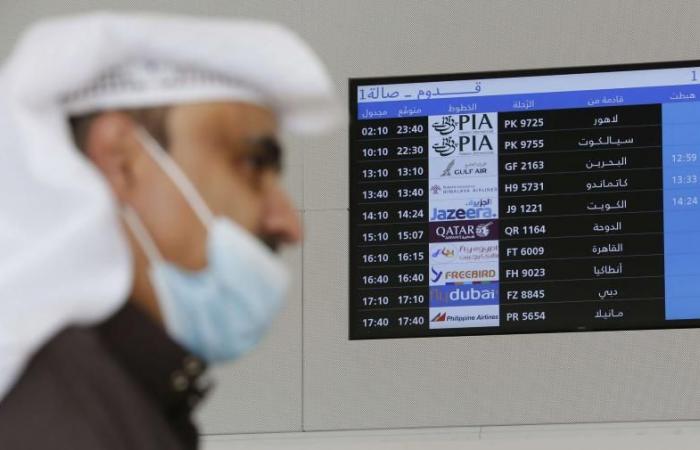 Hind Al Soulia - Riyadh - Amid the new burst of diplomatic thaw, lingering tensions between Doha and Manama have already surfaced.

A Saudi man waits for the arrival of relatives from Qatar in front of a screen displaying a Qatar Airways flight for the first time in 3 years, at King Khalid Airport in Riyadh. (AP)

CAIRO - Egypt reopened its airspace to Qatari flights on Tuesday and will allow the resumption of flights between the two countries, aviation sources and state media said.

The decision follows moves by Saudi Arabia, the United Arab Emirates, Bahrain and Egypt to end a boycott in which they severed diplomatic, trade and travel ties with Qatar in 2017.

Agreements set to be activated will also allow for goods transport between the two countries, according to sources from the civil aviation authority and aviation ministry.

Egypt and its Gulf allies imposed the embargo on Qatar over allegations that it supports Islamic extremists and keeps close ties to Iran, allegations Doha denies.

The Arab quartet, including Egypt, had agreed to lift the restrictions at a Gulf Cooperation Council summit last week in the Saudi desert city of Al-Ula, after a flurry of diplomatic activity by outgoing US President Donald Trump’s administration.

In the meantime, the first commercial flight between Qatar and Saudi Arabia in three and a half years, a Qatar Airways service to Riyadh, landed on Monday.

Just as the first flight to Riyadh was preparing to take off, Qatar Airways tweeted that services to Jeddah and Dammam would resume later in the week.

Bahrain and the United Arab Emirates have both opened their airspace to Qatari aviation under the deal but there has been no word on when the first direct flights will take off to or from those two nations.

Saudi Arabia’s closure of its airspace forced Qatar Airways aircraft to fly over Iran, Riyadh’s arch-rival and long-time adversary of Washington, paying significant overflight fees to Tehran in the process.

The New York Times has reported that Qatar paid $100 million annually to fly over the Islamic republic, citing diplomatic sources.

US national security adviser Robert O’Brien said in November that allowing Qatari planes to fly over Saudi Arabia via an “air bridge” was a priority for the outgoing Trump administration.

The economic hit of the crisis, coinciding with low oil prices and the coronavirus downturn, was felt across the region.

A Qatar Airways jetliner landed in Saudi Arabia on Monday, completing the first direct flight from Doha to Riyadh since the kingdom’s boycott of the tiny, energy-rich state in 2017.

Qatar Airways also announced it would restart daily service to the capital of Riyadh, four weekly flights to the Red Sea city of Jeddah and daily flights to the eastern city of Damman using wide-body aircraft like the Airbus A350-1000 that landed Monday. Saudi Airlines also flew to Doha later in the day.

“We also look forward to resuming a strong relationship with our trade and cargo partners in the Kingdom of Saudi Arabia, as well as the major airports in the country,” the Qatar state airline said.

Bahrain’s civil aviation affairs authority joined in saying it would reopen its airspace to Qatar on Monday, following a similar weekend announcement from the United Arab Emirates. Still, travelers are not yet able to book direct flights to Qatar on state-owned Emirati and Bahraini airlines.

On Saturday, the first Qatari vehicles passed through the country’s only land crossing with Saudi Arabia, which the state relied on for the import of dairy products, construction materials and other goods before the border slammed shut in 2017.

Amid the new burst of diplomatic thaw, lingering tensions between the countries have already surfaced.

Sami al-Haddad, from his fishing cruise in Bahrain’s territorial waters, the latest in a series of alleged arrests by the Qatari coast guard in a long-running maritime border dispute. Qatar did not immediately comment on the incident.

“There is no doubt that the people of the Gulf want this reconciliation, they want to turn a new leaf,” he said. “But … there are some issues, some difficult issues that will come up in the next phase.”

These were the details of the news Egypt joins Gulf countries in resuming air link to Qatar for this day. We hope that we have succeeded by giving you the full details and information. To follow all our news, you can subscribe to the alerts system or to one of our different systems to provide you with all that is new.