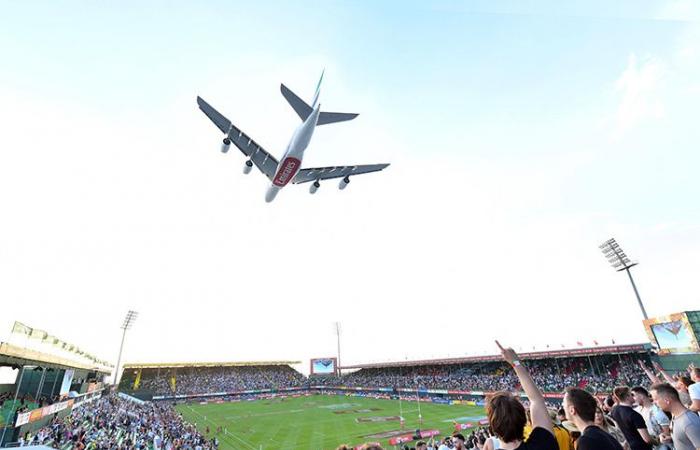 Hello and welcome to the details of VIDEO: Two spectacular Emirates A380 flypasts wow the crowds at Dubai Rugby Sevens and now with the details

Nevin Al Sukari - Abu Dhabi - Crowds cheers as an A380 performs a flypast in Dubai.

Taking off from Dubai International Airport at 1425hrs, the Emirates A380 made its approach above the stadium to conduct its first flypast at 1625hrs, cruising by at slow speed and low altitude.

Circling back, the second flypast soared above the Sevens stadium at 1640hrs, wowing spectators again with the dynamic flying display.

The special aircraft used for this flypast was wearing the livery dedicated to the milestone 50th staging of the Emirates Airline Dubai Rugby Sevens, Dubai’s flagship sporting event and one of the key tournaments on the HSBC World Rugby Sevens series. The aircraft, featuring male and female rugby players in action, has travelled to 34 A380 destinations since July, and underscores the airline’s commitment to the long-standing Emirates Airline Dubai Rugby Sevens.

Taking place over this weekend, the Emirates Airline Dubai Rugby Sevens is welcoming over 100,000 fans and spectators to watch over 900 rugby and netball matches. Tonight, the 50th edition of Dubai’s largest sporting and social event will also see international pop star Kylie Minogue headlining a concert for all visitors and rugby fans.

Emirates’ connection to the game of rugby goes back to 1987, when the airline became the Dubai Rugby Sevens event’s Official Sponsor. Since then, Emirates has helped elevate the profile of the sport of rugby in the UAE, working with partners such as the UAE Rugby Association to promote the sport as part of a vibrant community, and engage with rugby fans and players.

These were the details of the news VIDEO: Two spectacular Emirates A380 flypasts wow the crowds at Dubai Rugby Sevens for this day. We hope that we have succeeded by giving you the full details and information. To follow all our news, you can subscribe to the alerts system or to one of our different systems to provide you with all that is new.