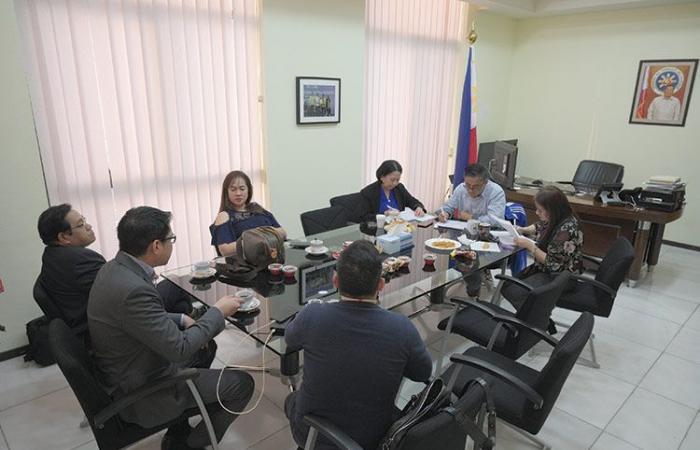 Nevin Al Sukari - Abu Dhabi - The deliberation for the finalists of the ‘Dakilang Bayani Awards 2019’ of the Philippine Consulate General in Dubai at the office of the Consul General.

Five Filipinos from the over 400,000-strong community in Dubai and the Northern Emirates, as determined by the Philippine Consulate General in Dubai (PCGDXB), are set to receive distinction in Community Service on Friday evening.

The five are from the 11 shortlisted for the “Dakilang Bayani Awards (Great Hero) 2019,” which the consular mission is bestowing on a Philippine citizen as its “way of giving meaningful recognition to exceptional Filipinos in Dubai, Sharjah, Ajman, Umm Al Quwain, Ras Al Khaimah and Fujairah.” “What makes this different from the other awards is that, firstly, it is the highest award given to an overseas Filipino by the (PCGDXB). Secondly, it gives emphasis on community service,” Dakilang Bayani Awards Committee 2019 member Dr. Rex Bacarra told Gulf Today on Wednesday evening.

He continued: “It is the depth and breadth of the Filipino’s involvement in community service, not on one’s career excellence or personal achievements.” As such, substantial to the criteria set forth since a few years back when conceptualized, is Community Involvement/Engagement which has been allocated 70 per cent. Receipt of Awards and Recognition is apportioned 20 per cent. Career Success Story is given a measly 10 per cent.

The trimming for the 11 was through “another round of selection by the five-member committee.” The 11 consequently went through the “rigours of the Question-and-Answer forum” completed at the premises of the consulate general in Al Qusais, Dubai one weekend.

The awarding ceremonies is part of the first-ever “Barrio Fiesta-Bayanihan 2019” to usher in Christmas, the most important annual event among Filipinos around the world.

A ticketed event at Area C/Gate 5 of the Zabeel Park from 10 a.m., the “Barrio Fiesta-Bayanihan 2019” will typify a centuries-old Philippine tradition—even pre-dating the discovery of the 7,107 archipelago by Spain in the 16th century—and which has been carried over to the contemporary times—leading to the institutionalization of 1,053 thus far single day to month-long festivals across the Southeast Asian country held either on the regional (18 regions), provincial (81 provinces), and municipal (1,489 municipalities or towns) levels. Even the 42,044 barangays (of 100 households) organise their mini yet grandiose village feats.

These were the details of the news 11 Filipinos for ‘Dakilang Bayani Awards 2019’ for this day. We hope that we have succeeded by giving you the full details and information. To follow all our news, you can subscribe to the alerts system or to one of our different systems to provide you with all that is new.