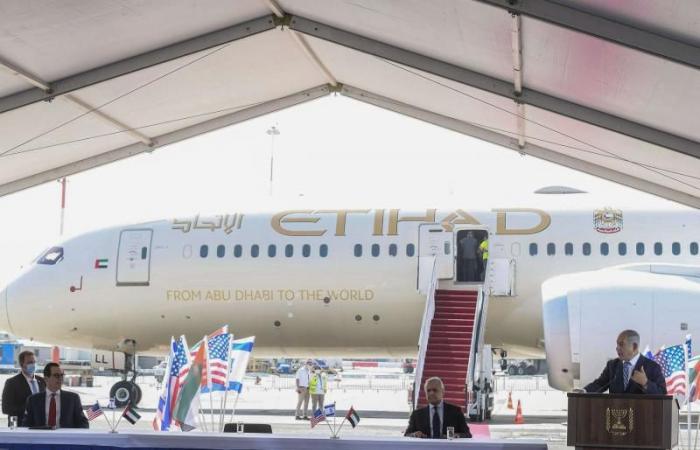 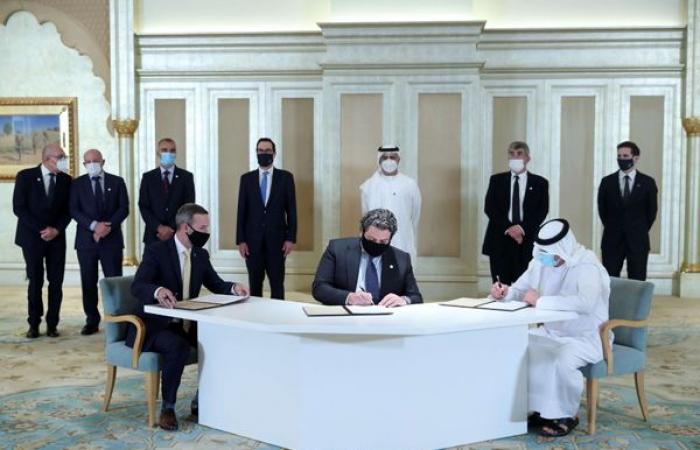 We show you our most important and recent visitors news details US, UAE and Israel launch $3 billion ‘Abraham Fund’ in the following article

Hind Al Soulia - Riyadh - A raft of agreements signed during visit to Israel by a senior Emirati delegation.

JERUSALEM –A delegation of senior Emirati officials visited Israel on Tuesday for the first time since the two countries agreed to normalise relations and signed a slew of bilateral agreements meant to solidify their new ties.

US Treasury Secretary Steven Mnuchin accompanied Emirati Finance Minister Obaid Humaid al-Tayer and other senior officials from the United Arab Emirates and the US on the Etihad Airways flight from Abu Dhabi to Tel Aviv.

Israeli Prime Minister Binyamin Netanyahu greeted Tayer and Mnuchin at Israel’s Ben-Gurion international airport before signing a series of bilateral agreements between Israel and the UAE, including civil aviation, visa exemption and science and innovation deals.

“We will remember this day, a glorious day of peace.”

The ceremony was closed to the media, and the Emirati delegation was to hold all meetings at the airport, apparently over coronavirus concerns.

The most ground-breaking agreement was that of visa-free travel, an unprecedented arrangement between Israel and an Arab state.

With their economies hard-hit by the coronavirus pandemic, the UAE and Israel are hoping for rapid dividends from the normalisation deal — which broke years of Arab consensus that there should be no relations with the Jewish state until it makes peace with the Palestinians.

While Israel has peace deals with neighbouring Egypt and Jordan, it requires citizens of both countries to obtain visas before entry.

Tayer said that the Emirates sought to establish legal frameworks with Israel “to achieve prosperity for both our economies and our people.”

He added the UAE was committed to being a “regional leader in terms of economic reform… international trade, political stability and peacemaking.”

Israel and the UAE announced in August they had agreed to normalise ties under a US-brokered deal, and signed accords on the White House lawn in September.

In the weeks since, the two countries have signed a raft of business, banking and intergovernmental agreements, along with an end to a longstanding boycott by the UAE against Israel.

“The Abraham Accords establish direct economic ties between two of the Middle East’s most thriving and advanced economies,” Mnuchin said at the ceremony.

At the ceremony, the US, UAE and Israel announced the establishment of the Abraham Fund, which aims to raise $3 billion in private funding for “development initiatives to promote regional economic cooperation and prosperity in the Middle East and beyond.”

According to Emirati news agency WAM, “the countries will trilaterally open a development office based in Israel to identify and initiate strategic projects with a high developmental impact, including those that catalyse economic growth, improve standards of living, and create high-value, quality jobs.”

“The fund will enable its members to launch people-focused investments, providing opportunity and hope for the region and its youth by enabling them to build a future that serves them and their communities. The UAE, the US, and Israel believe that this initiative will create the foundation for stronger regional cooperation based on diversity, exchange, and shared humanity,” added WAM.

The Abraham Fund will bolster regional trade, enable strategic infrastructure projects, and increase energy security through the provision of reliable and affordable access to electricity. The fund also aims to improve agricultural productivity and facilitate reliable and efficient access to clean water in the region.

The UAE and Bahrain are the third and fourth Arab states to establish ties with Israel. Egypt and Jordan signed peace treaties with Israel in 1979 and 1994, respectively.

Mnuchin flew with Israeli officials to Bahrain earlier this week for the signing of bilateral agreements between Israel and the Gulf monarchy.

These were the details of the news US, UAE and Israel launch $3 billion ‘Abraham Fund’ for this day. We hope that we have succeeded by giving you the full details and information. To follow all our news, you can subscribe to the alerts system or to one of our different systems to provide you with all that is new.