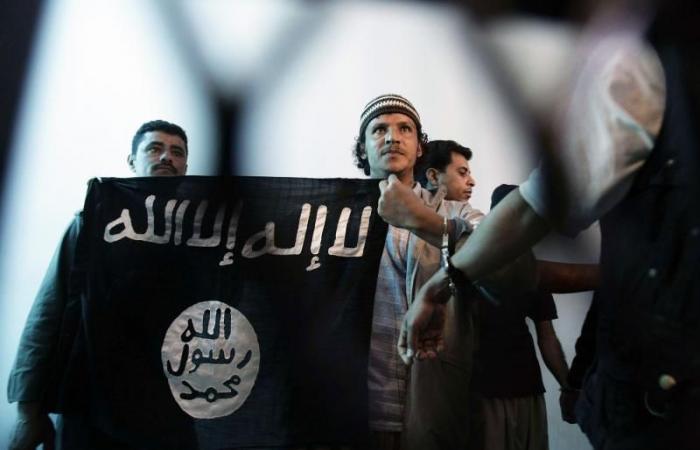 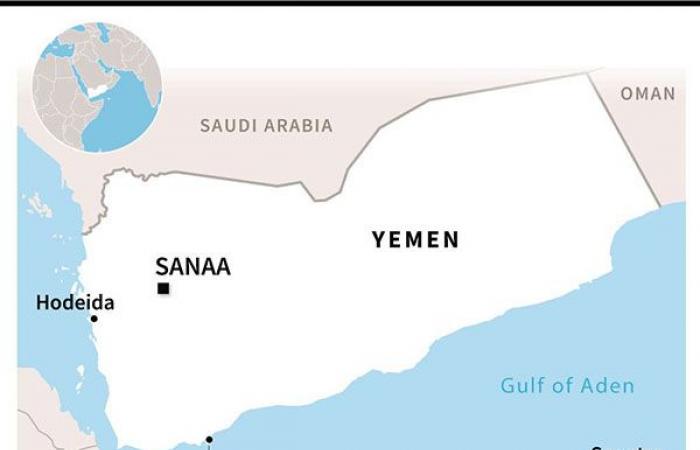 Hind Al Soulia - Riyadh - During the past few days, Qatari and Muslim Brotherhood media have claimed that the United Arab Emirates has the intention of establishing a joint military base with Israel on the island.

A file picture shows suspected Yemeni al-Qaida extremists holding the jihadist black standard as they stand behind bars during a court hearing in Sana’a, Yemen. (AP)

ADEN – Al-Qaeda in Yemen has threatened to carry out attacks on Arab coalition forces and the Southern Transitional Council (STC) forces, reacting to the news circulated during the past few days by Qatari and Muslim Brotherhood media claiming that the United Arab Emirates has the intention of establishing a joint military base with Israel on the island of Socotra.

The statement attributed to al-Qaeda threatened to launch what it described as suicide and “immersion” operations on the island and outside it. “Let the Jews and their Emirati agents know that if they set foot on Socotra, they’ll be the target of our firepower and will be nowhere safe from our martyrdom (suicide) and immersion operations,” the statement said.

The discourse used in Al-Qaeda’s statement was disturbingly similar to the inflammatory and propaganda discourse adopted by Qatari, Muslim Brotherhood and Houthi media sites to try to discredit the UAE in particular, and it has increased in frequency and intensity in the wake of the peace agreement between Abu Dhabi and Tel Aviv.

A Yemeni female politician said that the use of the Emirati-Israeli relations in the context of the systematic intimidation campaign in Yemen conducted by Doha and the international organisation of the Muslim Brotherhood has become a new strategy in their targeting of the Arab coalition in Yemen. They are now brandishing the threat of terror operations through direct incitement and media preparation for actions by terrorist groups, which many of them function as military arms of the Muslim Brotherhood agenda.

The sources added, in a statement to The Arab Weekly, that the use of Socotra as a card in the conflict between Qatar and Turkey on the one hand and the Arab coalition on the other went through several stages, beginning with spreading fake news about the coalition forces destroying and looting the natural heritage of the island, then followed that by leaking news about the coalition attempting to change the political identity of the islanders and to establish military bases on the island, and now by talking about a joint UAE-Israeli military and intelligence base there. The goal of this kind of propaganda is to provoke the ire of Yemeni public opinion and prepare the ground for direct operations against the Arab coalition forces and the STC by the armed proxies of the Muslim Brotherhood and Qatar.

The sources revealed that Doha had leaked, in coordination with forces loyal to it in the Yemeni government, misleading information about the UAE establishing military bases on the Yemeni archipelago of Socotra from an early date, even though none of the UAE forces were present on the island. And now with the news of normalising relations between the Emirates and Israel, that same propaganda was revived with an added spin making the imaginary bases a joint Emirati-Israeli military and intelligence endeavour.

Qatar had aims to enable Ankara to reach the Socotra Archipelago and build a base there. That project was, however, undermined by the STC forces gaining control of the main island and removing the Yemeni government forces accused of being in cahoots with the Muslim Brotherhood. Having failed on that front, Doha tried to sell the the allegation that the Socotra archipelago belonged to Somalia instead of Yemen.

Mashrai added in a statement to The Arab Weekly that Qatari media’s failure to mention the source of the aforementioned website constitutes a deliberate attempt to mislead the public opinion in order to give credibility to the news.

By tracking down the Yemeni source of the news, it turned out that the disinformation was primarily cooked up by the forces hostile to the Arab coalition in Yemen, especially the Houthis, whose political and media discourse is based on the far-fetched claim that they are fighting Israeli ambitions in Yemen.

Regarding the possible impact of this misleading bit of fake news on provoking an escalation of actions by terrorist groups, Mashari pointed out that Al-Qaeda and ISIS have been already targeting the Arab coalition forces since the beginning of the war. However, the latest development is al-Qaeda’s call on those it referred to as “the people of the Sunna” to start targeting the coalition forces and the STC forces, in an attempt to exploit the fake news disseminated by the Qatari and Brotherhood media, and to take the conflict to a more violent level.

Yemeni political sources warned that a close examination of the recent Qatari-sponsored activity in Yemen confirms Doha’s intent to employ all available tools to take the battle to a more dangerous level through the use of terrorist groups, financing the establishment of camps for the so-called “Popular Mobilisation” and direct involvement in backing the Houthi militias with money, weapons and drones to target the coalition countries.

Western media sources quoted a former intelligence officer as saying that Doha was involved in supporting the Houthis in order to target the Kingdom of Saudi Arabia, according to the Austrian Die Press newspaper.

Former intelligence officer, Jason G., confirmed to the German-language paper that Qatar have been providing direct support to the Houthis during the past few years.

These were the details of the news Brotherhood pushing fake news about UAE in Socotra to fuel terror for this day. We hope that we have succeeded by giving you the full details and information. To follow all our news, you can subscribe to the alerts system or to one of our different systems to provide you with all that is new.