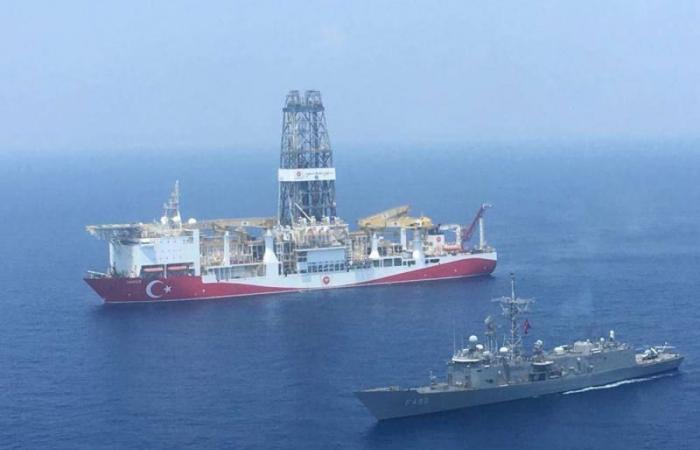 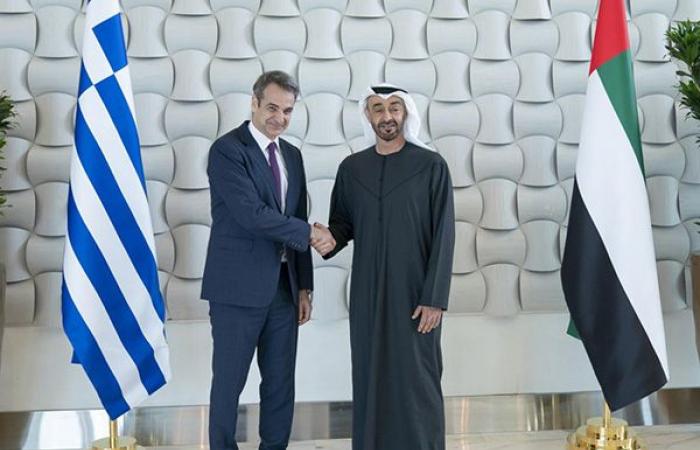 A file picture shows a Turkish Navy warship patrolling next to Turkey’s drilling ship “Fatih” dispatched towards the Eastern Mediterranean near Cyprus. (AFP)

During telephone talks, Sheikh Mohammed and Mitsotakis raised a number of “regional and international issues of mutual interest,” including developments in the Mediterranean, pointed out WAM.

The two sides emphasised the importance of “maintaining security and peace in this region and avoidance of adopting any policies that may threaten its stability or hinder the exploitation of its resources for the benefit of its people in line with the international law.”

The two leaders also stressed the need for peaceful settlement of disputes and in a way that “sustains regional security and global peace,” it added

The talks between Sheikh Mohammed and Mitsotakis came amid international worries over Turkey’s increased intervention in Libya and its disputed drilling activities in the Mediterranean.

During a teleconference held last May, the foreign ministers of the UAE, Egypt, Cyprus, Greece and France “strongly condemned Turkey’s military interference in Libya” and its attempts to “illegally conduct drilling operations” off Cyprus.

They said the Erdogan-Sarraj deals are “in contravention of international law and the UN arms embargo in Libya, and that both undermine regional stability.”

The ministers also condemned “the illegal Turkish movements” in the territorial waters and the exclusive economic zone of the Republic of Cyprus, which they said represent “a violation of international law according to the United Nations Convention on the Law of the Sea.”

The global fight against the pandemic was part of discussions Monday between the Emirati and Greek leaders.

Mitsotakis thanked the UAE for providing medical aid to his country to combat the pandemic and expressed his appreciation to the UAE’s humanitarian role in addressing its overall effects.

Since the the COVID-19 outbreak, the UAE has been a leader in global humanitarian efforts to stem the virus’s spread.

As one of the the most active providers of foreign COVID-19 assistance in the world, the UAE has assisted 70 countries, including China, Italy, the United Kingdom, Iran, Pakistan, Brazil, Russia, Yemen and Afghanistan.

It has assisted more than 1 million medical workers worldwide through the supply of over 1,000 tonnes of personal protective equipment, PPE and medical and food aid.

The UAE has also partnered with numerous international organisations to boost the effectiveness and reach of their COVID-19 aid.

The world’s largest humanitarian hub at Dubai’s International Humanitarian City is driving the COVID-19 response, with around 80% of World Health Organisation-procured supplies transiting through the area.

Sheikh Mohammed and Mitsotakis discussed bilateral relations in view of the Emirati-Greek Strategic Forum, scheduled for later this month.

These were the details of the news UAE-Greek talks address Mediterranean security for this day. We hope that we have succeeded by giving you the full details and information. To follow all our news, you can subscribe to the alerts system or to one of our different systems to provide you with all that is new.