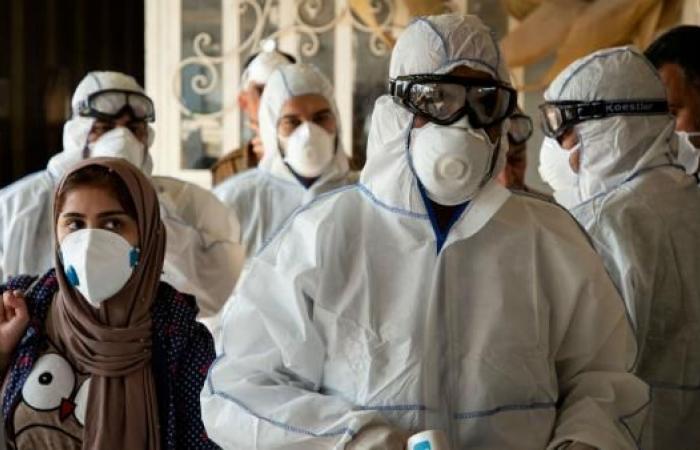 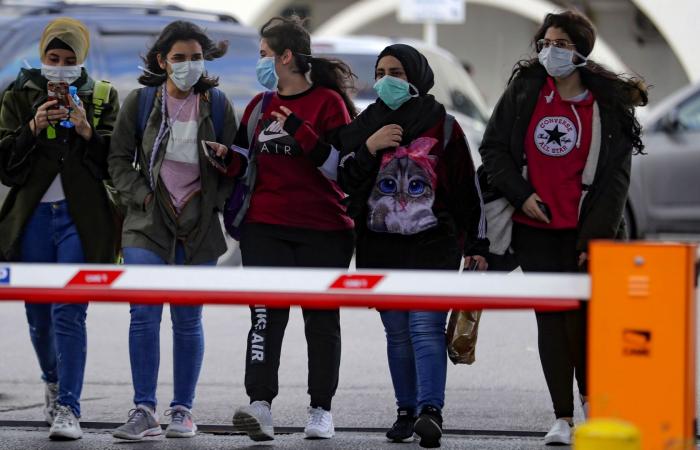 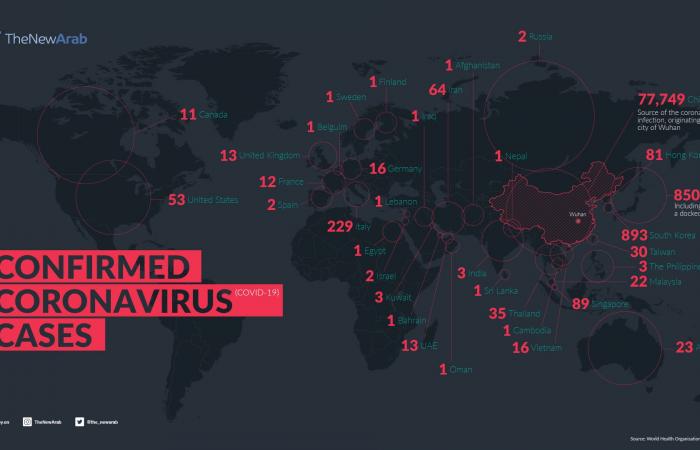 In December the number of coronavirus cases in the Middle East was zero. Less than two months later and not only are there cases in at least seven Arab countries, but Iran has become the regional epicentre of the epidemic with the second-highest death rate after China.

Iran has suffered 16 confirmed deaths and 43 cases due to the virus - though the government quickly denied claims made by one of its politicians that 50 people had died in the holy city of Qom alone.

Despite the denials of the high numbers of deaths in Qom, neighbouring Arab states are concerned that the Iran city - and other Shia holy sites in the country - could become a hub for the disease and exported overseas through pilgrims.

Qom could be the source of the spread of coronovirus in the region, with many of those who have tested positive for the disease in Arab countries having returned from Iran.

Iran's deputy health minister on Tuesday confirmed that he had contracted the virus. The UAE, Bahrain, Kuwait, Iraq, Oman, Afghanistan, Lebanon and Egypt have all confirmed cases.

Countries in the Middle East are scrambling to contain the spread of the potentially deadly coronavirus, which has 79,331 cases worldwide and 2,595 deaths according to latest figures from the World Health Organisation.

Oman and Turkey have halted flights to Iran, the vector of infection in the Middle East, and Bahrain cancelled connections to Dubai and Sharjah in the UAE.

Others are halting food imports from China, where the virus is thought to have originated.

According to latest numbers, China by far suffers the highest rate of cases, with 77,262 people reportedly suffering from the illness, and 2,618 dead.

The virus spread is concentrated in East Asia, with cases in China, Japan, Korea, Singapore and Malaysia.

However, the coronavirus has been spreading wildly across the increasingly globalised world, from Canada to Australia.

There are concerns that coronavirus clusters in Iran - as well as in Italy and South Korea - could signal a serious new stage in the global spread of the virus.

Last week, the WHO was asked if Iran’s recent spate of new cases has put the world at a tipping point.

"The window of opportunity is narrowing, so we need to act quickly before it closes completely. This outbreak could go in any direction," Director General Tedros Adhanon Ghebreyesus responded.

"If we do well, we can avert any serious crisis, but if we squander the opportunity then we will have a serious problem on our hands."

A few weeks ago, the UAE reported its first cases of coronavirus in the Middle East, after a family who had travelled from Wuhan - where the virus is thought to have originated from - arrived in the Gulf state. That number has since jumped to 13.

Iraq has reported five cases, Oman four, Bahrain and Kuwait three reported cases, Israel two, while Afghanistan, Egypt and Lebanon have discovered one case in each.

What is the coronavirus?

Coronaviruses are a family of viruses that cause a range of illnesses, from a mild common cold to more severe diseases, for example SARS and Middle East Respiratory Syndrome (MERS), according to the WHO.

These viruses transmit between animals and people, and several strains exist only animals.

The virus was named after the Latin word corona which means "crown" - under an electron microscope the image of the virus resembles a solar corona.

The novel strain, which was identified by Chinese authorities on 7 January, is a new strain that had not been previously identified in humans.

According to the WHO, symptoms include fever, cough, shortness of breath and breathing difficulties.

In severe cases it can lead to pneumonia, SARS, kidney failure and death.

There is currently no treatment for the virus, and a tentative vaccine won't be ready until the end of the year.

The Middle East, as well as Turkey and other Muslim-majority countries are doing everything they can to prevent a spread.

The Lebanese government has banned its residents from flying out of the country for pilgrimages, as flights to countries with coronavirus have been restricted, the information minister revealed.

Last week Lebanon declared its first confirmed case of the virus - a 45-year-old woman who had returned to the country after visiting Iran. A family of four in Iraq tested positive for the virus after a trip to coronavirus. After Oman reported its first coronavirus cases - two women who are thought to be in stable condition - the country swiftly grounded flights to Iran, citing concerns about the spread of the virus. Two more cases have been discovered since.

The UAE's ministry of foreign affairs issued a statement on Monday detailing a travel ban to Iran and Thailand following recent concerns over outbreaks in these countries.

"In light of the UAE's efforts to monitor and contain the spread of the new coronavirus, COVID-19... the ministry of foreign affairs and international cooperation has issued a travel ban, calling on all UAE citizens to not travel to Iran and Thailand at present and up until further notice," the statement read.

Tajikistan also suspended flights to and from Iran due to the viruses spread in the Central Asian country, the government said.

Four immediate neighbours of the Islamic Republic - Turkey, Pakistan, Afghanistan and Armenia - said on Sunday they would close land borders. Three imposed restrictions on air traffic, amid growing regional concerns about the spread of the virus.

"To prevent the spread of the novel #coronavirus and protect the public, Afghanistan suspends all passenger movement (air and ground) to and from Iran," the office of the National Security Council of Afghanistan tweeted.

Iraqi and Kuwaiti authorities have already banned travel to and from Iran and closed borders.

The UAE had quarantined confirmed cases in local hospitals in rooms that have lower air pressure than normal in an attempt to prevent the risk of the virus spreading.

Airports in Dubai and Abu Dhabi banned most flights to and from mainland China and introduced up to eight hours of vetting and health checks for those travelling from Beijing.

In Tunisia, the ministry of health has sparked controversy by designating a hostel in a southern suburb of the capital as a potential quarantine spot.

But the plan has faced serious backlash, with members of the municipal council threatening collective resignation over the move. The area's local population has also said they will protest if the plan is implemented.

The ministry's choice of Hammam Chott poses a danger to residents and visitors, and will have economic and social repercussions, the mayor added.

The ministry's chosen area includes a university complex resident to thousands of students, an international centre for scouts, a sports complex, resorts and approximately forty thousand residents, according to Zaqrouba.

Jordanian authorities in January announced a halt on Chinese animal and vegetable products as a precaution, the agriculture ministry announced on Monday.

The director of the ministry’s licensing department Karim Al-Hussami told reporters that the decision was made in an effort to prevent the spread of the coronavirus to Jordan.

"Import licenses from China have been suspended until further notice," Al-Hussami said.

Though there are rumours that coronavirus originated in bats, there is no evidence that meat-eating is linked to the virus, and you can't catch it from pets.

The WHO advises people to wash hands with soap after touching animals and animal products.

People of Asian descent are reporting more cases of xenophobia, with China accusing America of deliberately drumming up panic over the virus.

The US "hasn't provided any substantial assistance" and has only created "panic", said foreign ministry spokeswoman Hua Chunying at a press briefing.

People online across the world, including Lebanon have said they no longer wish to order products from Asian websites like AliExpress over fears of transmitting the virus - despite no proof this could happen.

In Israel there has been an uptick of anti-Asian racism towards Chinese students studying in universities across the country.

The director of the Center for Disease Controls' (CDC) Center for Immunisation and Respiratory Diseases Dr. Nancy Messonnier said that due to the poor survivability of these kind of viruses on surfaces "there is likely very very low risk of spread from products or packaging that are shipped over a period of days or weeks at ambient temperatures".

Racist incidents have been reported across the world, from the UK, Australia, France and parts of the Middle East, while citizens of Asian descent are the recipients of abuse.

The French hashtag #JeNeSuisPasUnVirus [I am not a virus] has been trending online and they use it to complain about the abuse they have received on public transport, social media and even mainstream media.

These were the details of the news How the Middle East is dealing with coronavirus for this day. We hope that we have succeeded by giving you the full details and information. To follow all our news, you can subscribe to the alerts system or to one of our different systems to provide you with all that is new. 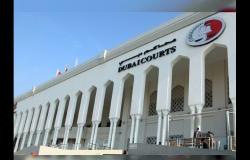 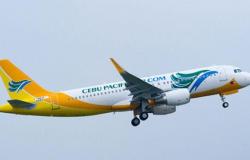 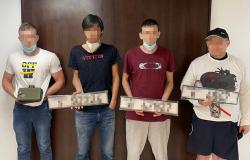