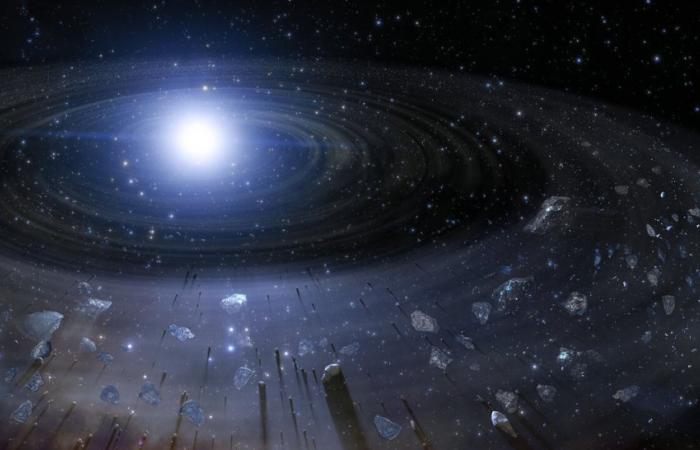 In Arabic, the newly discovered rocks are “different from any rocks in our solar system.”

Astronomers have discovered never-before-seen rock species, made up of extraordinary proportions of minerals, within the remnants of alien worlds torn apart host stars moribund. The research suggests that these exoplanets are built from a much wider range of materials than previously thought.

In the new study, researchers looked at 23 white dwarf Small, dense remnants of dead low and medium-mass stars within 650 light-years from the Sun. When these stars were dying and turning into white dwarfs, the exoplanets orbiting around them were torn apart. Thus, the atmosphere of this white dwarfs Contains guts from the alien worlds they destroyed. The researchers found the proportion of different elements in the atmospheres of white dwarfs by analyzing the light emitted by the stars. Then they calculated the most likely combination of minerals that would make up the obliterated alien worlds.

“While some exoplanets that have been orbiting white dwarfs look similar to Earth, most have rock types that are alien to our solar system,” said lead author Siyi Xu, an astronomer at the National Infrared Astronomy Research Laboratory (NOIRLab) in Arizona. . in a statement . “They have no direct counterparts in the solar system.

Tombs of the outer planets

White dwarfs form when main-sequence stars, like the Sun, run out of fuel to burn and begin to swell into red giants before collapsing under their weight into highly condensed, cooled stellar cores. During the process, these dying stars release a cloud of superheated gas that engulfs the planets orbiting them.

Some exoplanets can withstand this cosmic barrage, but most of them get out of their orbit and are then torn apart by a field gravity The strong white dwarf. This is known as tidal turbulence; Once a planet is torn apart, the white dwarf pulls the planet’s remnants inward in a process known as accretion.

The atmosphere of a white dwarf usually contains hydrogen and helium Only , because any heavier elements sink into the super-dense core of the star. Therefore, when the light that stars emit shows the presence of other heavier elements, the researchers hypothesize that these elements must come from accretion of exoplanets.

Scientists have estimated that about 25% of all white dwarfs contain the remains of dead exoplanets, or so-called polluted white dwarfs. Cemeteries of exoplanets have become a hot topic of research among astronomers because scientists can use them to infer the properties of objects that once orbited them.

In the new study, the researchers focused on polluting white dwarfs that already had accurate measurement data showing the proportion of Magnesium and calcium silicon and iron in its atmosphere . Astronomers believe that these elements are common in the cores and mantles of exoplanets, which make up the majority of planets under the outer crust. By calculating the ratio of these elements, scientists can reverse engineer the minerals that would have made up the rocky bowels of the planets. Advertisement

To do this, the researchers used a set of calculations that previously “worked remarkably well” when used to “classify rocks on Earth” with similar data, co-author Keith Buterka, a geologist at California State University, told Live Science.

However, the results revealed that the vast majority of the minerals that make up these exoplanets were very different from what they expected, Buterka said.

“On Earth, the rocks that appear in the mantle are composed mostly of three minerals, olivine, orthopyroxene, and clinoproxene,” Buterka said. He added that the proportion of elements in most of the polluted white dwarfs showed that it was unlikely that some of these minerals would form.

Instead, other minerals consisting of various combinations of magnesium-rich pyricylase and quartz, a crystalline mineral made of silica — would have formed instead, which differs from those expected within the other inner planets of the solar system, Buterka said. This conflicts with previous assumptions that exoplanets would be more similar to those we see in the solar system.

These minerals are so different from those we know that researchers have had to create new names to classify them, including “pyroxenite quartz” and “perclase deionite.” However, it is unclear exactly how many new minerals are present in these white dwarfs. Buterka said that “new experiments to fully understand the minerals in the new formulations” are required.

In the past, studies of the atmospheres of polluted white dwarfs focused on whether or not exoplanets were likely to have a continental crust like Earth. Scientists believe that the continental crust is essential to the survival of life on a planet because it provides a stable structure for evolution to occur. Thus, the possibility of exoplanet crusts could answer questions about the possibility of alien life or the chances of finding an Earth-like exoplanet.

In a research paper published in February in the journal Nature Astronomy In the study, the researchers claimed to have found evidence of Earth-like continental crust in the atmosphere of polluted white dwarfs. Like the most recent study, this paper indicated that a large portion of the exoplanet’s configurations were different from those of the Earth, As Live Science previously reported . But rather than focusing on the differences between the overall compositions of the planets, the authors of that study focused on a specific set of elements as evidence for inferring the existence of a continental crust.

However, the new paper’s authors are not convinced. “We do not agree that their identities are valid examples of continental crust,” Buterka said. He added that their assumptions depended heavily on the presence of individual elements such as aluminum and lithium , and don’t rely enough on the metal they came from. Related content

The researchers also think that it may not even be possible to detect continental crusts inside a polluted white dwarf because they make up a small fraction of the mass of an exoplanet. “Earth’s crust is less than 0.5% of its total mass,” Buterka said. “If planets were bulk absorbed into the atmosphere of white dwarfs, it would be impossible to see the crustal structures.”

But this does not mean that there is no hope of searching for continental crusts among the outer planets. Instead, the researchers believe, knowing more about the minerals in the planet’s mantle could tell them more about how likely these worlds have supported crust or even tectonic plates, overlapping sections of continental crust that move and collide with it. Others lead to earthquakes and volcanic activity.

“If we have a mantle that does not contain olivine but contains quartz, or a mantle that does not contain orthoproxene but contains pyrcylase, then the thermodynamic and physical properties can be very different and can affect the type, thickness and extent of the crust,” Buterka said. “New experiments are needed to understand the kinds of geological histories that might really be possible.”

These were the details of the news Never-before-seen rocks have been found in the tombs of exoplanets for this day. We hope that we have succeeded by giving you the full details and information. To follow all our news, you can subscribe to the alerts system or to one of our different systems to provide you with all that is new.