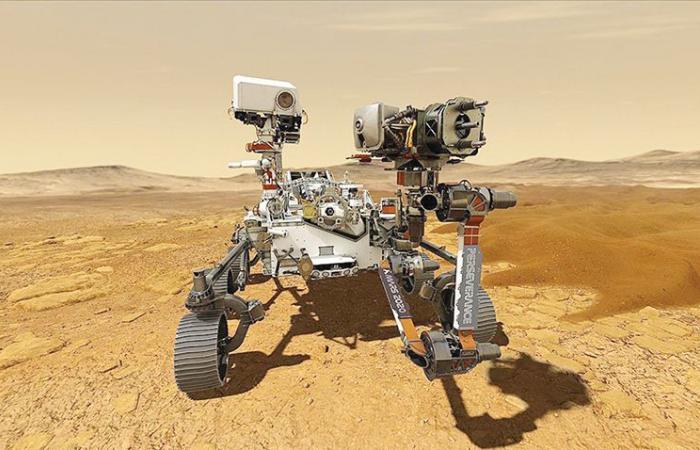 The US space agency, NASA, said that samples collected by its spacecraft on Mars indicate the possibility of… The existence of ancient life on the surface of the planet. The agency’s Curiosity spacecraft has been on a mission for nearly a decade time, to determine if Mars is habitable by living organisms. And

And the American network, “CNN”, indicated on Tuesday that a new analysis of the sediment samples that… The rover collected it revealed the presence of carbon and possible ancient life on the Red Planet. She added that it may be just one possible explanation for why the planet exists. And

The network explained that carbon is the basis for all life on Earth, and the carbon cycle is the natural process of recycling recycle carbon atoms. She pointed out that on our home planet, carbon atoms go through a cycle as they move from the atmosphere to the Earth , and then back to the atmosphere.

She pointed out that most of the carbon is found in rocks and sediments, and the rest is in the global ocean, atmosphere and living organisms . The network said: «This is why carbon atoms with their own recycling cycle They are trace elements of biological activity on Earth, so they can be used to help researchers determine whether Ancient life exists on Mars. And

“When these atoms are measured inside another material, such as Martian sediments, they can be It sheds light on the carbon cycle on a planet, no matter when it occurred.” And

It quoted a NASA study published in the American “National Science” magazine as saying that: Knowing more about the origin of this newly discovered Martian carbon could also reveal the process of the carbon cycle on Mars. And

The study stated that sediment samples collected between 2012 and 2021 were heated to about 1,562 . degrees Fahrenheit (850 degrees Celsius), in order to separate the elements, causing gas samples to be released Methane, which was then analyzed by another instrument in the rover’s arsenal to show the presence of isotopes Stable carbon or carbon atoms. And

“The carbon samples It is somewhat similar to samples from Australia taken from sediments that are 2.7 billion years old.”

These were the details of the news Gulf News | Possibility of ancient life on Mars for this day. We hope that we have succeeded by giving you the full details and information. To follow all our news, you can subscribe to the alerts system or to one of our different systems to provide you with all that is new.