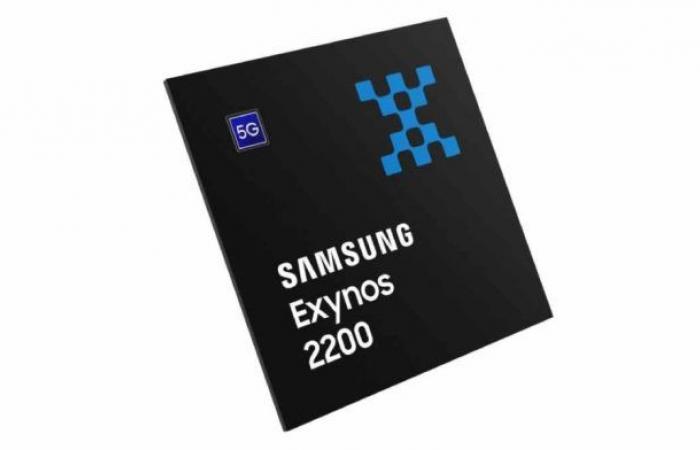 Samsung Electronics announced today its latest flagship processor for smartphones, Exynos 2200, which is considered one of the most awaited Exynos processors from Samsung, as it comes with an integrated graphics processing unit developed by the company in cooperation with AMD, with the aim of providing its smartphones Much better gaming experience.

Both Samsung and AMD had announced for the first time their cooperation earlier in 2019, and then AMD confirmed earlier last year 2021 that the new flagship Samsung processor or SoC will be based on the RDNA 2 architecture, but both companies did not reveal any details about The new Samsung Exynos 2200 processor.

Samsung said that its new processor, Exynos 2200, comes with a 4nm manufacturing technology, and it also comes equipped with a graphics processor unit called Xclipse, which it says it developed based on RDNA 2 technology from AMD, a leading manufacturer of electronic chips, which it says will redefine The experience that smartphones provide in playing games, it also provides an entirely better experience for users.

What are the advantages of the processor Samsung Exynos 2200 Exynos 2200?

The integrated GPU in the Exynos 2200 is considered the most prominent feature of the new Samsung processor, which the South Korean company calls Xclipse, indicating that it will represent a new chapter in the experience of playing games through smartphones, as the integrated GPU in the Exynos 2200 comes based on the structure AMD RDNA 2 High-performance graphics that offer advanced graphics processing features, including support for ray tracing and variable rate shading (VRS), technologies previously only available on PCs and game consoles.

Ray tracing technology will provide the user with more realistic lighting effects for the displayed scenes from games, as the technology simulates how light interacts in the real world, by calculating the movement and chromatic properties of light rays as they bounce off the surface, while the VRS technology supported by the graphics processor provides in The new Samsung Exynos 2200 processor gives developers better control over the shading rate to improve the performance of the GPU.

The new Samsung Exynos 2200 processor is one of the first processors to rely on the latest Armv9 CPU cores from ARM, which Samsung says offers a significant improvement in security and performance compared to Armv8, as the Exynos 2200 octa-core includes a design consisting of an Arm Cortex-X2 core. , plus three performance- and efficiency-balanced Cortex-A710 cores and four energy-efficient Cortex-A510 cores.

The new Samsung Exynos 2200 processor also offers a greater ability to process AI applications, depending on the built-in NPU processor, which Samsung says provides weak performance compared to the previous version, while providing better support for connecting to fifth generation networks through a new, better modem built into the processor. , which supports both sub-6GHz and mmWave networks, as well as support for the new Dual Connection (EN-DC) technology, which uses both 4G LTE and 5G NR signals together, providing Internet connectivity at speeds of up to 10Gbps.

Samsung confirmed that its new Exynos 2200 processor comes with an integrated technology for storing private encryption keys, with enhanced built-in encryption for both UFS storage and DRAM to safely share user data encryption only within the secure domain.

Better photography experience based on a more powerful image processor

The new ISP image signal processor built into the Exynos 2200 supports cameras up to 200 megapixels at 30 frames per second, with support for image processing mode from a single camera up to 108 megapixels, or processing images from two cameras together with a resolution of up to 64 + 36 megapixels, with the ability to Connect to up to seven cameras and play four at the same time, plus support for video recording up to 4K HDR or 8K.

Samsung plans to rely on its new Exynos 2200 processor for the first time in its flagship Galaxy S22 series of smartphones, which is expected to be launched during February 2022, while relying on a Qualcomm processor. Snapdragon 8 Gen1 in some markets.

These were the details of the news Exynos 2200: Specifications and features of the Samsung Exynos 2200 processor for this day. We hope that we have succeeded by giving you the full details and information. To follow all our news, you can subscribe to the alerts system or to one of our different systems to provide you with all that is new.