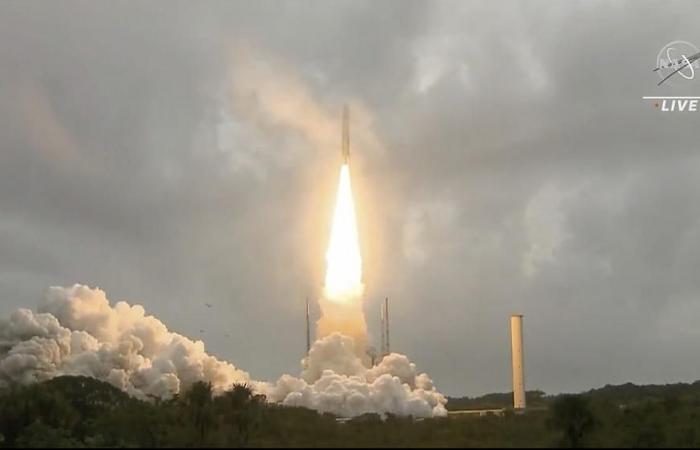 Ariane 5 rocket successfully launched the space telescopeJames Webb“On its final orbit path after its launch Saturday at 12:20 GMT from the Space Center in French Guiana, and this will telescope A revolution in the field of observing the universe, according to an AFP journalist at the scene.

The flight lasted 27 minutes, before the telescope, which was put on its final orbit path, separated about 1.5 million kilometers from Earth. The telescope developed by the US space agency “NASAWith its European and Canadian counterparts, it would allow observing the first galaxies that appeared after the Big Bang and deepening understanding of how stars are formed and observing planets outside the solar system.

“Are we alone in this universe?”

The release of James Webb has been delayed three times, most recently on Tuesday. And the US space agency (NASA) announced that the reason for the delay was “bad weather” in the city of Koro.

The aim of this most accurate space observation tool in history is to illuminate two questions that preoccupy humanity: “Where do we come from?” and “Are we alone in this universe?”

Its purpose is also to probe the depths of the so-called “cosmic dawn” when the first galaxies began to illuminate the universe since the Big Bang 13.8 billion years ago.

It will allow a deeper understanding of how stars and galaxies are formed and observing planets outside the solar system that scientists are discovering more of, in the hope of finding other planets suitable for life.

James Webb will follow the example of the Hubble telescope, which revolutionized space observation techniques, thanks to which scientists discovered the presence of a black hole in the heart of all galaxies or water vapor around the outer planets, for census.

Through waves that are invisible to the naked eye

The US space agency developed the first designs for the telescope known as “GWST” shortly after the launch of “Hubble” in 1990, and construction began in 2004 in cooperation with the European Space Agency and that of Canada. This device is distinguished on more than one level.

Its 6.5-meter-long mirror makes it seven times more capable of sensing, which allows it, for example, to monitor the thermal effect of a bee on the moon.

James Webb is also distinguished by his observational technology. The Hubble telescope conducts observations in fields where the light is visible. As for James Webb, it probes waves that are invisible to the naked eye from medium-range and near infrared rays, a ray emitted by every astronomical body, star, human or flower.

A prerequisite for the proper functioning of the telescope’s observations is that the surrounding temperature is so low that it does not affect the tracking of light.

The Hubble telescope was placed in orbit about 600 km above Earth. But at this distance, James Webb would be unusable, heated by the sun and reflected by the Earth and Moon.

The telescope will be put into place after a month-long journey over 1.5 million kilometers from Earth. It will be protected from solar radiation thanks to a heat shield consisting of five flexible sails that dissipate heat and reduce its temperature (80 degrees Celsius) to minus 233 degrees Celsius at the telescope side.

And NASA has taken strict measures to avoid any damage to the telescope, which cost nearly ten billion dollars to develop over many years.

27 minutes after launch, the world will know if the operation has gone well.

The success of the operation will strengthen existing partnerships between NASA and its European partners.

Officials from “NASA” and the European Space Agency at the Kourou Space Center in French Guiana stressed the importance of “close cooperation in the field of space to achieve great achievements.”

But it will have to wait several weeks to see if the telescope is operational and is scheduled to be put into service in June.

These were the details of the news An Ariane 5 rocket successfully puts the James Webb Space Telescope... for this day. We hope that we have succeeded by giving you the full details and information. To follow all our news, you can subscribe to the alerts system or to one of our different systems to provide you with all that is new.