A black hole has been observed whose explosions extend over an... 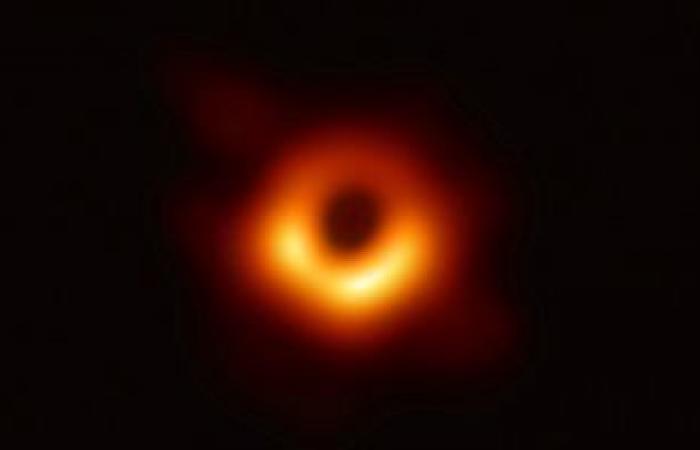 About 12 million light-years away from Earth, a galaxy neighboring the Milky Way is experiencing some chaos, and the culprit is a “hungry” black hole with a mass equivalent to 55 million suns, and for hundreds of millions of years, this huge hole has been feeding on gas and dust falling from the surrounding galaxy, Centaurus A, then burns the material back up at nearly the speed of light, causing ‘radio bubbles’ to grow over hundreds of millions of years.

According to RT, astronomers have captured the black hole’s massive radio emissions from discarded material emitted from its center, with the help of a highly durable radio telescope, the Murchison Widefield Array in Australia.

The team says that if we could see the explosion with the naked eye from here on Earth, it would be the size of 16 full moons lying side by side in the sky.

The scientists published a paper in which they shared an image of the glow, which was generated from radio wave data, on Wednesday in the journal Nature Astronomy.

“We can learn a lot from the Centaurus galaxy in particular, just because it is so close and we can see it,” Benjamin McKinley, of the International Center for Research in Radio Astronomy (ICRAR) in Perth, Western Australia, an astronomer at Australias Curtin University and lead author of the study, said in a statement. With such details.”

Supermassive black holes at the center of galaxies such as Centaurus are fed by gas and dust that are attracted by the massive gravity.

This process releases huge amounts of energy, and the galaxy is said to become “active”. Most of the matter is located near the edge of the black hole. However, some of the surrounding particles escape moments before they are captured and explode away into space at speeds approaching the speed of light.

The new image reveals stunning recent details of radio emissions from the galaxy, according to Dr. McKinley, who said: “These radio waves come from matter being absorbed into the supermassive black hole in the center of the galaxy.”

The absorbed material begins to form a disk around the supermassive black hole. This accretion disk looks very similar to the rings around Saturn, and when parts of the material begin to separate from each other and approach the black hole, powerful jets form on both sides of the disk, which leads to the ejection of most of the material into space, to distances of perhaps more than a million light years.

Previous radio observations could not cope with the extreme brightness of the jet signals and the details of the larger region surrounding the galaxy were distorted, but the new image overcomes these limitations.

Any galaxy that participates in this aggressive routine is called an “active” radio galaxy, and Centaurus is closest to Earth, from which it can be learned, not only in radio wavelengths, but also in all other wavelengths of light.

More precisely, for the black hole of our galactic neighbor, gas clouds condense in the accretion disk and “rain” over the central regions. And this is how space monsters (black holes) feed.

“Because of this rain, the black hole interacts powerfully by releasing energy back through radio jets that amplify the amazing lobes we see in the telescope image,” explains Massimo Gaspari, an astrophysicist from the Italian National Institute of Astrophysics and co-author of the study. In other words, the resulting jets create kinds of “radio bubbles” that bleed for hundreds and millions of years.

“In this research, we were able to combine radio observations with optical and X-ray data, to help us better understand the physics of these supermassive black holes,” McKinley explained.

It is noteworthy that the Murchison Widefield Array is a combination of 4096 antennas arranged in 256 regular networks distributed over several kilometers, and the telescope has a wide field of view, helps to overcome many obstacles and provides a huge amount of data, which means a very high potential for discoveries .

These were the details of the news A black hole has been observed whose explosions extend over an... for this day. We hope that we have succeeded by giving you the full details and information. To follow all our news, you can subscribe to the alerts system or to one of our different systems to provide you with all that is new.