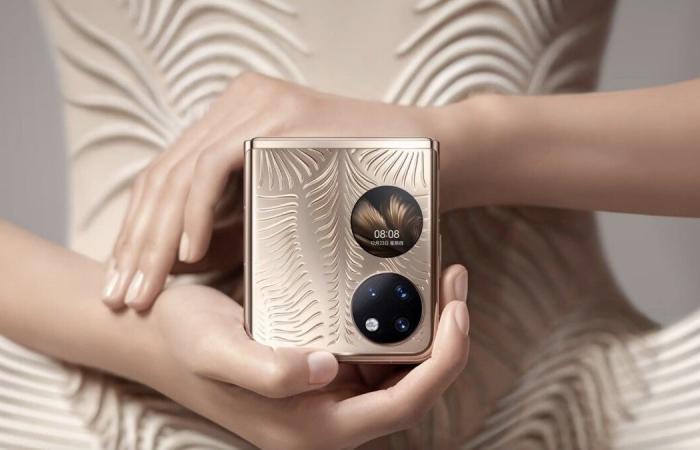 The Chinese company “Huawei” officially unveiled its foldable smartphone “P50 Pocket” in a clamshell style that has a 1-inch circular external screen for quick access to notifications and tools, noting that it was launched in China starting today, Thursday.

The Huawei P50 Pocket is the company’s first foldable smartphone, and inherits the dual ring design of the Huawei P50, where the first ring contains a covering screen and the second contains the camera sensors.

The screen has an anti-reflective layer on top that the company says reduces glare and reflection by up to 56% compared to the iPhone 13 Pro Max. Similar to the Moto Razr and Galaxy Flip 3, the P50 Pocket also has a cover screen that shows important information at a glance.

For example, if you’re using your phone to navigate a new city, your cover screen will display brief, step-by-step directions, rather than force you to open the big home screen to check your location.

And unlike the Galaxy Z Flip 3, the Huawei P50 Pocket does not leave a small gap when folded, as Huawei indicated that it uses a new multi-dimensional hinge that is stronger and more reliable than its competitors.

The device weighs about 190 grams with a thickness of only 7.2 mm.

During a presentation, the CEO of Huawei’s Consumer Business Group, Richard Yu, said that the clamshell design provides a more refined approach to foldable devices.

“It’s so subtle and gorgeous,” he added. “We want to bring you elegance on the go.”

The phone comes with a “Qualcomm Snapdragon 888 4G SoC” processor, a 4,000mAh battery, and it runs on “Harmony OS 2” certified by Huawei.

The P50 Pocket also has Face ID on both the home screen and the lid, and a side-mounted fingerprint sensor.

Huawei did not give any details about its plans to bring the phone to other markets outside China, where the Chinese telecom giant is subject to US sanctions that prevent it from using key technology such as Google’s Android operating system.

Critics say the P50 Pocket will have no effect in the West because of these sanctions.

These were the details of the news Huawei officially launches the P50 Pocket foldable phone (video) for this day. We hope that we have succeeded by giving you the full details and information. To follow all our news, you can subscribe to the alerts system or to one of our different systems to provide you with all that is new.