A terrifying black hole appears in space threatening the inhabitants of... 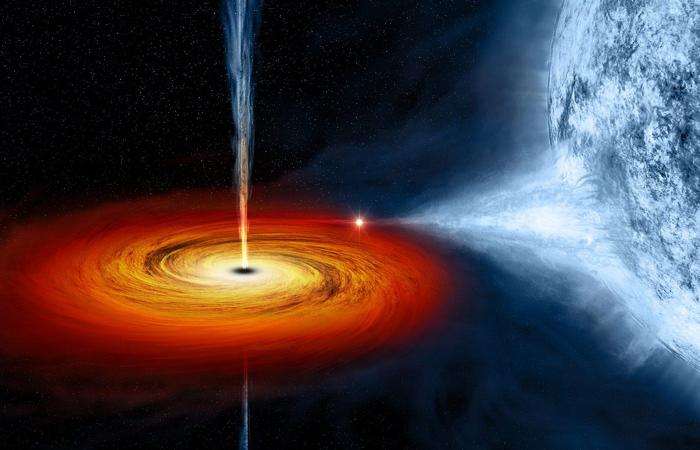 About 12 million light-years from Earth, a neighboring galaxy to the Milky Way is experiencing some chaos, and the culprit is a “hungry” black hole with a mass equal to 55 million suns.

With the help of a heavy-duty radio telescope, the Murchison Widefield Array in Australia, astronomers have captured the black hole’s massive radio emissions from discarded material emanating from its center.

The team says that if we can see the explosion with the naked eye from here on Earth, it will be the size of 16 full moons placed side by side in the sky, and it may approach the Earth and pose a real danger to it.

“We can learn a lot from the Centaurus galaxy in particular, just because it is so close and we can see it,” Benjamin McKinley, of the International Center for Research in Radio Astronomy (ICRAR) in Perth, Western Australia, an astronomer at Australia’s Curtin University and lead author of the study, said in a statement. With such details.”

This process releases huge amounts of energy, and the galaxy is said to become “active”. Most of the matter is located near the edge of the black hole. However, some of the surrounding particles escape moments before they are captured and explode into space at speeds approaching the speed of light.

The new image reveals stunning recent details of radio emissions from the galaxy, according to Dr. McKinley, who said: “These radio waves come from matter being absorbed into the supermassive black hole in the center of the galaxy.”

The absorbed material begins to form a disk around the supermassive black hole. This accretion disk looks very similar to the rings around Saturn, and when parts of the material begin to separate from each other approaching the black hole, powerful jets form on both sides of the disk, which leads to the ejection of most of the material into space, about distances that may exceed a million light years. agencies

These were the details of the news A terrifying black hole appears in space threatening the inhabitants of... for this day. We hope that we have succeeded by giving you the full details and information. To follow all our news, you can subscribe to the alerts system or to one of our different systems to provide you with all that is new.