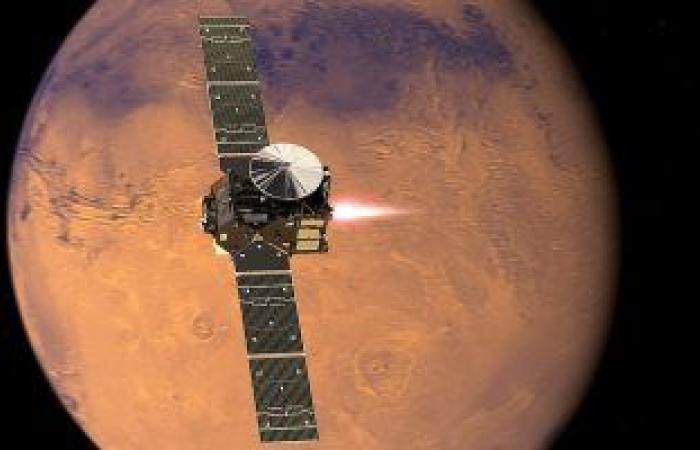 NASA plans to send humans to the surface of Mars sometime in the 2030s, but getting off the Red Planet could prove very costly.

The US space agency estimates that transporting 30 tons of methane and liquid oxygen to operate the return rockets will cost about $8 billion, according to RT.

Therefore, researchers at the Georgia Institute of Technology have proposed a method that uses the natural resources on Mars to grow bacteria, which can be converted into fuel.

The team wants to build giant photobioreactors on Mars that use sunlight and carbon dioxide to produce cyanobacteria to make sugars.

The engineered E. coli bacteria, which will be shipped from Earth, will convert those sugars into a Martian propellant for rockets and other thrusters.

Not only does this method significantly reduce costs, but the researchers say the new process will generate 44 tons of clean oxygen that could support human colonization of the Red Planet.

It is noteworthy that the organic compound called 2,3-butanediol is not just a concept, but is used on Earth to make polymers for the production of rubber.

“2,3-butanediol has been around for a long time, but we’ve never considered using it as a propellant. After analysis and initial pilot study, we realized it’s a really good candidate,” Winting Sun, associate professor at the Daniel Guggenheim School of Aerospace Engineering, said in a statement.

The paper, published in Nature Communications, explains that the photovoltaic reactors will consist of four units, including the growth zone of cyanobacteria that use photosynthesis (a process that requires both carbon dioxide and sunlight).

A separate reactor will contain enzymes that break down cyanobacteria into sugars, which will be fed to E. coli to produce the rocket propellant.

The research team found that the bio-ISRU strategy uses 32% less energy, despite it weighing three times, than the current option to ship methane from Earth and produce oxygen via chemical catalysis.

“It takes much less energy to launch on Mars, which has given us the flexibility to look at different things, and chemicals that aren’t designed to launch rockets on Earth,” study co-author Pamela Peralta Yahya, associate professor in the School of Chemistry and Biochemistry, said in a statement.

“We’re starting to think of ways to take advantage of the planet’s low gravity and lack of oxygen to create solutions that aren’t suitable for launches on Earth.”

It is noteworthy that NASA’s timetable for when it plans to send humans to Mars has changed over the years, with missions relying heavily on returning astronauts to the moon first. However, the latest news suggests that 2037 may be the year when human feet will set foot on the Red Planet.

These were the details of the news NASA seeks to turn bacteria growing on Mars into rocket fuel for this day. We hope that we have succeeded by giving you the full details and information. To follow all our news, you can subscribe to the alerts system or to one of our different systems to provide you with all that is new.