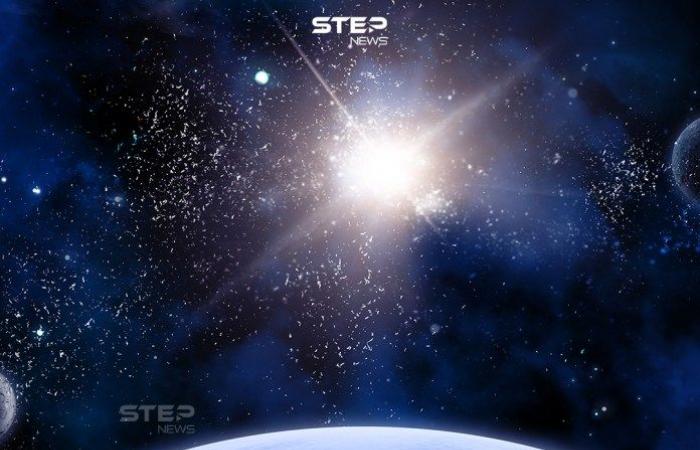 Scientists Photos astronomy Japanese snapshots of possible impact on Jupiter; A little more than a month after a similar incident was observed.

A team led by Ko Arimatsu of Kyoto University released footage of a mysterious bright light appearing on the gas giant (Jupiter) for about four seconds on October 15.

According to astronomical sites, the event occurred in the northern equatorial region of Jupiter, near the southern edge of the northern temperate belt.

For their part, the researchers shared on Twitter: “For the first time in history, we have succeeded in simultaneous observation of a flash of light as a small object crashed into the surface of Jupiter at 22:24 (Japan time) on October 15.”

According to astronomers, Jupiter collides with dozens, perhaps hundreds, of asteroids every year, as the giant planet acts as a shield for the planet to prevent such objects from affecting it, however, catching such an event is very rare.

And last month, amateur astronomers caught a bright light appearing for a few seconds on Jupiter.

German astronomer Harald Palecki was observing the shadow of Jupiter’s moon creating a solar eclipse in Jupiter’s atmosphere when he discovered the potential impact. After seeing the bright flash, he said he looked at each frame in the hope of determining the cause of the light.

He found that the flash was in Jupiter’s atmosphere and remained visible for two seconds, ruling out any interference on Earth or a random moon floating across the planet.

A new force of nature

The new, as yet unreviewed, result from CERN’s Giant Particle Collider adds further support to the idea, Science Alert said in a report.

The best current theory of particles and forces is known as the Standard Model, which describes everything we know about the physical things that make up the world around us with unmistakable accuracy. The Standard Model is undoubtedly the most successful scientific theory ever written, yet at the same time we know that it must be incomplete.

He added: “It describes only three of the four fundamental forces – the electromagnetic force and the strong and weak forces, leaving out gravity. There is no explanation for the dark matter that astronomy tells us dominates the universe, nor can it explain how matter survived during the Big Bang.”

Therefore, most physicists are confident that there must be more cosmic components yet to be discovered, and studying a variety of fundamental particles known as beauty quarks is a particularly promising way to get hints of what else might be there.

There are six flavors of quarks dubbed up, down, weird, charming, beauty/bottom, and honesty/up. For example, the up and down quarks make up the protons and neutrons in the nucleus of an atom.

Beauty quarks are unstable, averaging about 1.5 trillion milliseconds before they decay into other particles, and the way they decay can be severely affected by the presence of other fundamental particles or forces.

When it decays, it turns into a group of lighter particles, such as electrons, through the influence of the weak force.

One of the ways in which a new force of nature might become known to us is by subtly changing the number of times beauty quarks decay into different kinds of particles.

The March paper, according to University of Cambridge particle physicist Harry Cliff, was based on data from the LHCb experiment, one of four giant particle detectors that record the results of ultra-high-energy collisions produced by the LHC. (The letter “b” in the LHCb stands for “beauty”).

He found that beauty quarks decay into electrons and their heavier relatives called muons at different rates. This was really surprising because, according to the Standard Model, the muon is basically a carbon copy of the electron – identical in every way except for being about 200 times heavier.

This means that all forces must pull electrons and muons with equal force, when beauty quarks decay into electrons or muons via the weak force, they must do so to the same extent.

Instead, the researchers found, the muon decay was only occurring about 85 percent as the electron decay. Assuming the result is correct, the only way to explain such an effect would be if some new force of nature pulling electrons and muons differently interfered with how beauty quarks decay.

The result caused great excitement among physicists particles. Cliff has searched for signs of something beyond the Standard Model for decades, and despite ten years of working at the LHC, has yet to find anything conclusive.

So discovering a new force from nature would be enormous, and could finally open the door to answering some of the deepest mysteries facing modern science.

These were the details of the news Video| Documenting the moment a mysterious object collided with Jupiter... for this day. We hope that we have succeeded by giving you the full details and information. To follow all our news, you can subscribe to the alerts system or to one of our different systems to provide you with all that is new.