Take a new picture of Jupiter from the moon 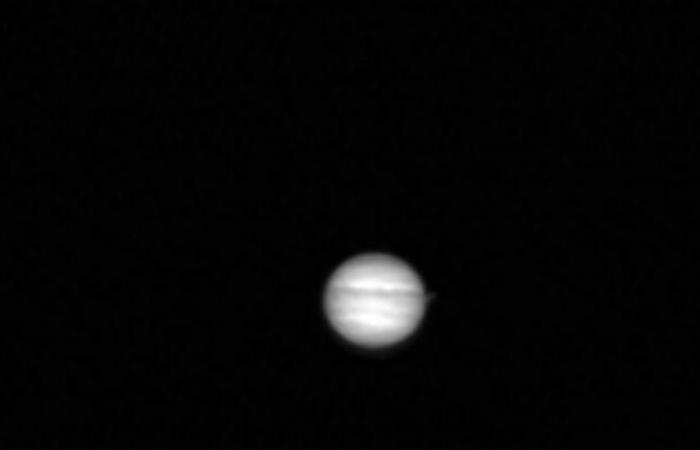 NASA’s lunar explorer team used some high-powered calculations to survey the sky region to capture a picture of Jupiter.

But recently, the team of this lunar explorer used some high-powered calculations and the exact timing of using its reconnaissance orbit camera to survey the region of the sky, where Jupiter was about 600 million kilometers away, which led them to the grand prize, which is to take a new image of the planet If enlarged, its famous moons can be seen.

Although this image isn’t Hubble Space Telescope quality, capturing this image from a spacecraft orbiting 100 kilometers above the moon’s surface is a true engineering feat.

Making the calculations to take a picture of Jupiter has been a darling job, as we do these complex maneuvers because we love exploring planets and taking pictures, Brett Denevi, a member of the Lunar Reconnaissance Orbiter (LRO) team, says on the Exploratory website.

“It’s fun to catch a glimpse of our solar system from time to time from our lunar explorer,” he adds.

Because the Lunar Reconnaissance Orbiter (LRO) is 12 years old, some things aren’t working as they used to, the Inertial Measurement Unit (IMU) that keeps tabs on where the Explorer is pointing is nearing the end of its life, and this unit is being used Now only in emergencies or special situations, the explorer team must now use the spacecraft’s star-tracking cameras to derive an estimate of its position and rotation.

This adds complexities to imaging anywhere we don’t want star trackers to point to the moon instead of the stars, and spacecraft are aging, so solar panels have to be flipped away from the sun for as little time as possible. The operations team has to work hard to find exactly the right time to turn the spacecraft toward the outer solar system and scan through Jupiter to get this image.”

And this isn’t the first time the lunar explorer has taken a picture of Jupiter, as he took another one in 2020, and every now and then, the explorer turns his view outward to peek at other places in the solar system, like Mars and even Earth.

“But just like many people around the world who love to point their telescopes at the sky and see stars and planets up close, the Lunar Reconnaissance team couldn’t resist doing the same,” explains Denevi.

These were the details of the news Take a new picture of Jupiter from the moon for this day. We hope that we have succeeded by giving you the full details and information. To follow all our news, you can subscribe to the alerts system or to one of our different systems to provide you with all that is new.