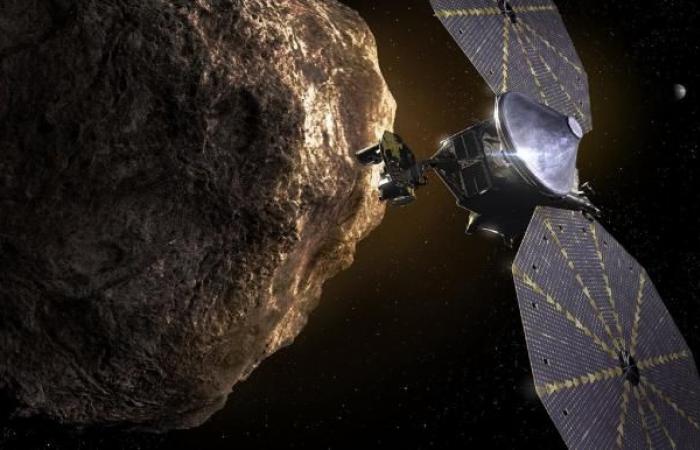 The US space agency is preparingNASA) to launch next month the 12-year “Lucy” mission, through which it aims to be closely watched for the first time asteroids located on the same orbit with JupiterTo better understand how our solar system was formed.

Trojan asteroids, the number of which are known, are about 7,000, and orbit the sun in two groups, one of which precedes Jupiter and the other follows it.

During its journey, the spacecraft will fly first by 2025 over an asteroid in the main asteroid belt (between Mars and Jupiter), and then over the following years over seven Trojan asteroids.

The lead researcher in this mission at the Southwest Research Institute in Boulder, Colorado, USA, Hal Levision, explained during a press conference that these recent asteroids “are very different from one another, even though they are located in a very narrow region of space,” adding, “For example, their colors are completely different.” Some are gray and some are red.

Among the hypotheses is that it was formed at a location farther from Jupiter’s orbit, before it was attracted to its location, and that these colors are a reflection of where they came from.

“Whatever discoveries the mission Lucy makes, it will give us necessary indications about the formation of our solar system,” said Laurie Gleese, director of the Planetary Sciences Division at NASA.

The spacecraft will approach the selected objects with a distance of only between 400 km and 950 km. Thanks to three scientific instruments on board and a large antenna, researchers seek to study the geology and composition of these asteroids, as well as their specific density, mass, and size.

The Atlas 5 rocket is scheduled to launch from Florida on October 16.

The value of the mission, including the costs of operations, which will last 12 years, is estimated at $981 million.

The vehicle was built by Lockheed Martin and is a true “work of art,” according to the company’s “Lucy” program manager Rich Lybe.

The vehicle includes more than three kilometers of cable, in addition to large solar panels that, when placed side by side, are as long as a five-storey building.

This will be the first solar powered vehicle to reach this distance from the sun, and it will monitor asteroids more closely than any previous vehicle.

The researchers who discovered this skeleton at the time were listening to the famous Beatles song “Lucy in the Sky with Diamonds.” NASA has chosen a logo for the new mission in the form of a diamond, which is inspired by that incident.

These were the details of the news NASA prepares to launch Lucy mission to Trojan asteroids for this day. We hope that we have succeeded by giving you the full details and information. To follow all our news, you can subscribe to the alerts system or to one of our different systems to provide you with all that is new.