Officially – reveal the specifications of the expected middle-class phone Galaxy... 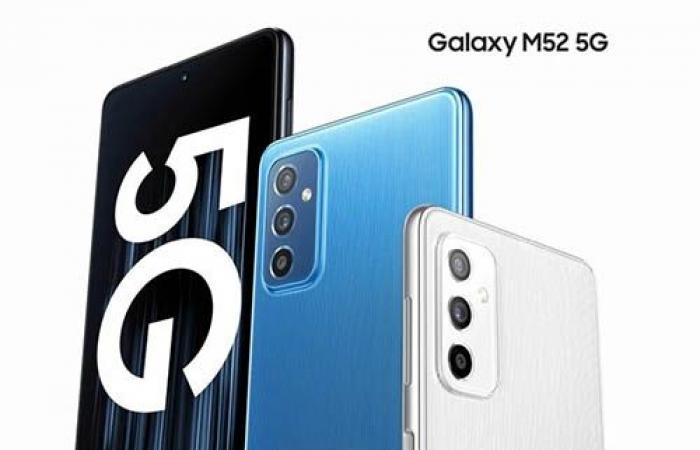 Samsung has officially announced the Galaxy M52 5G, a phone suitable for owners of medium budgets and very close in specifications to the Galaxy A52s.

The Galaxy M52 5G phone was launched on the Polish website of Samsung, which was spotted by Roland Quandt. The phone has a huge 6.7-inch screen that features an AMOLED display panel, FHD + resolution, and a refresh rate of 120Hz. The screen has a central hole in the middle from the top for a 32-megapixel selfie camera.

Just like the Galaxy A52s, the Galaxy M52 5G has a 6nm Snapdragon 778G 5G processor on the inside, along with 6GB of RAM and 128GB of internal storage.

The rear camera configuration is a triple-lens matrix, the primary sensor is 64 MP, along with a 12 MP wide-angle lens, and a 5 MP macro lens.

The phone also has a massive 5,000mAh battery, which means you’ll be able to use the phone for two days on a single charge – but in any case we’ll wait for the phone’s battery life reviews.

Just like all recently launched Samsung phones, the phone supports only 25W fast charging, has a side fingerprint sensor, a USB-C port, a microSD card slot with an audio system that supports Dolby Atmos technology.

The strange thing is that the phone does not have a 3.5 mm port for headphones. It seems that Samsung is planning to sacrifice the 3.5 mm port even with future mid-range phones.

The new phone runs Android 11 with the One UI 3.1 user interface, and the phone is expected to feature continuous support for 3 years of system upgrades and 4 years of security updates.

We are not sure of the price of the phone yet, but it is expected that it will be launched on the market starting on September 28 in European countries and it is possible that it will reach some Asian markets at the same time.

These were the details of the news Officially – reveal the specifications of the expected middle-class phone Galaxy... for this day. We hope that we have succeeded by giving you the full details and information. To follow all our news, you can subscribe to the alerts system or to one of our different systems to provide you with all that is new.