What are the “anti-aging” stars? .. A report that answers 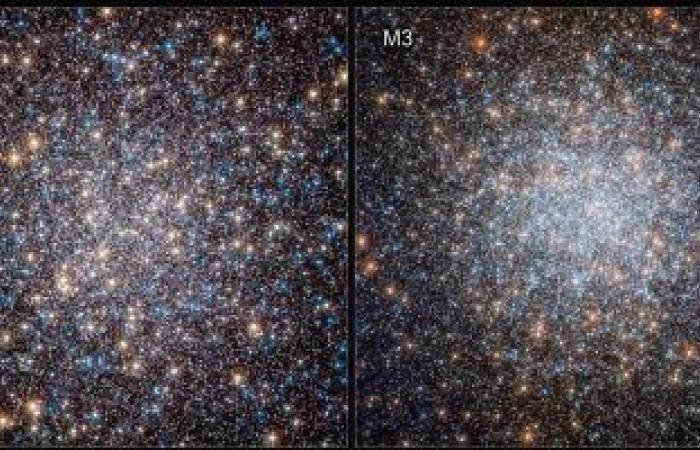 A new study claims that white dwarfs – the stellar remnants of long-dead stars – “look smaller than they actually are”, RT reports.
Thanks to the data from Hubble Space TelescopeAstronomers have discovered the first evidence that white dwarfs can slow the “rate of aging” by burning hydrogen on their surface.

They found that about 70 percent of all white dwarfs in M13 have an outer shell of hydrogen, which allows them to burn longer and thus cool more slowly.

White dwarfs are the incredibly dense remnants of sun-sized stars that have exhausted their nuclear fuel, shrinking to roughly the size of Earth.

Roughly 98% of all stars in the universe end up as white dwarfs, including our sun.

According to the European Space Agency, the study challenges the prevailing view of white dwarfs as inert, slow-cooling stars.

“We found the first observational evidence that white dwarfs can undergo stable thermonuclear activity. This was a big surprise, because it goes against what is common,” said study author Jianxing Chen, from the University of Bologna and Italy’s National Institute of Astrophysics.

White dwarfs are common in the universe, slowly cooling stars that shed their outer layers during the last stages of their lives.

Studying these cooling stages helps astronomers understand not only white dwarfs, but their early stages as well.

The researchers looked at groups M3 and M13, which share many physical properties such as age and the degree of “metallic” – elements other than hydrogen and helium.

But the groups of stars that will eventually give rise to white dwarfs differ in the two groups.

In particular, the overall color of stars in the evolution phase known as the horizontal branch is bluer in M13, indicating the presence of a group of hotter stars.

Together, this makes M3 and M13 an “ideal natural laboratory” for testing how cold different groups of white dwarfs are.

“The remarkable quality of our Hubble observations gave us a complete view of the star clusters of the two globular clusters,” Chen said. “This really allowed us to compare how stars evolved in M3 and M13.”

Using Hubble’s Wide Field Camera 3, the team observed M3 and M13 at wavelengths near the ultraviolet, allowing them to compare more than 700 white dwarfs in the two groups.

The M13, on the other hand, has two sets of white dwarfs – standard white dwarfs and those that managed to stick to a hydrogen outer shell, allowing them to burn longer.

Comparing their results with computer simulations of stellar evolution in M13, the team found that nearly 70 percent of white dwarfs in M13 burn hydrogen on their surfaces, slowing the rate at which they cool.

Meanwhile, M3 has slow-burning white dwarfs at a “zero” rate, according to study author Professor Francesco Ferraro, also at the University of Bologna and Italy’s National Institute for Astrophysics.

This discovery may have consequences for how astronomers measure the ages of stars in the Milky Way.

Previously, the evolution of white dwarfs was modeled on a predictable cooling process, according to the team.

This relatively direct relationship between age and temperature led astronomers to use the white dwarf’s cooling rate as a natural clock to determine the ages of star clusters, especially globular and open clusters.

However, white dwarfs burning hydrogen could cause these age estimates to be inaccurate by up to a billion years – unless other methods are used to age stellar systems.

The research team is now studying other clusters similar to M13 “to constrain the conditions that drive stars to maintain the thin hydrogen envelope that allows them to age slowly.”

These were the details of the news What are the “anti-aging” stars? .. A report that answers for this day. We hope that we have succeeded by giving you the full details and information. To follow all our news, you can subscribe to the alerts system or to one of our different systems to provide you with all that is new.