Lab – What is the heart rate monitor of the Lidl Silvercrest SFW220 connected watch worth? 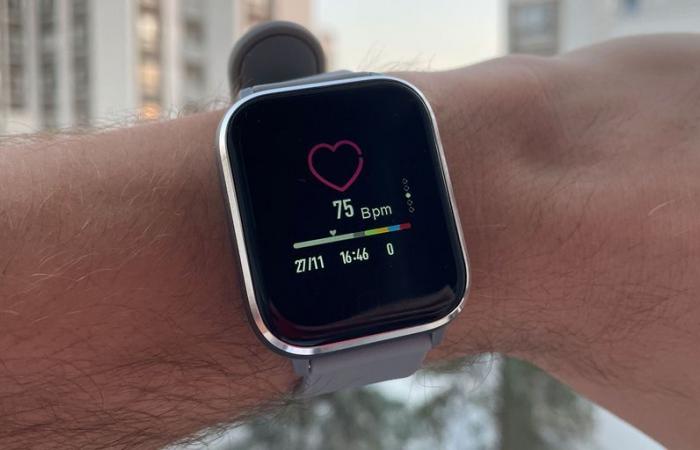 Launched at 40 €, direct competitors to the SFW220, a connected watch from Silvercrest and Lidl, are rare. However, despite its ultra-aggressive pricing positioning, the German manufacturer has integrated a heart rate monitor to measure, you guessed it, heart rate. Trendy technology, everywhere, but difficult to master. The proof with this Lidl model unable to follow a high intensity exercise, but able to create fictitious heart variations.

An app that hides the forest

To assess the SFW220 heart rate monitor, we performed four measurements. A first was carried out at rest, corresponding to an hour of teleworking sitting on an office chair. The second was recorded during a gentle race. The third, during an intense race trip. Finally, the fourth was measured during interval training, where the heart rate varies rapidly. We then compared the results obtained with those of the Polar H10 chest strap, which we consider to be very reliable.

First things first… The Silvercrest Smart Watch app, which allows you to synchronize the watch, only delivers one heart rate data. This is the average measured during exercise. If we believe it, the SFW220 measures 59 beats per minute (bpm) when we are at rest. On the soft output, she estimates an average of 77 bpm. Ditto when exiting an intense race with a stagnant value at 77 bpm. Finally, during the interval exercise, the app indicates 90 bpm. As you can imagine, these averages are extremely far from reality. And if your tester fantasizes about a heart capable of being valiant in any situation, the reality is different. He has a heart like the others, able to climb to a tempo presto, much more removed. At rest, his heart rate was 77 bpm, 143 bpm during the gentle outing, then 172 bpm during the intense run. Finally, it peaks at 173 bpm on the interval. This represents very significant differences, close to 50%. What to make completely unusable data.

However, it was difficult to draw conclusions about the quality of this heart rate monitor with this single average data. By digging for a long time, we then achieved something quite astonishing. The data shared by the SFW220 with the Apple Health app is much more accurate than that shown in the Silvercrest Smart Watch app. We thus find measurements every second. By exploiting this new panel of information, the averages are then more relevant – to a certain extent. We thus find 72 bpm at rest and 131 bpm for the soft output, with respective margins of error at 6 and 7%. So far, everything has been going well… But when the intensity increases further, the watch reveals its limits. During the intense outing, it stagnates at 113 bpm and peaks at 122 in intervals. This then corresponds to differences of about 30%, much too high to be exploitable. It will therefore be necessary to be content with gentle outings with this heart rate monitor. Yes, it is a very big but.

A watch that creates heart problems for you

Even if these averages turn out to be much closer to reality, a major problem remains. The watch suffers from sudden and far too usual variations in heart rate. These very regular artefacts degrade the relevance of the results given by the connected watch. Because what many recent models boast of being able to spot is precisely abrupt and short variations. Here, the SFW220 produces, enough to create heart problems from scratch. Ironically, the Apple Watch, which this model is inspired by, manages to detect these artifacts. At rest, peaks are already felt here and there.

Just put on your running shoes and start to exercise quietly to lose the SFW220. We thus encounter regular increases and decreases when the chest belt remains mobilized between 120 and 150 bpm.

As we accelerate further, we see that the watch is still moving away from reality. Worse, some peaks indicate realistic values, but remain too far apart to allow consistent monitoring, especially since the watch has difficulty climbing above 150 b / m.

Finally, with an interval exercise where the heart rate varies regularly, we observe that the watch does not manage to exceed 150 b / m. Problem to truly capture the effort. The SFW220 also fails to reproduce the regularity of the curve taken with our chest strap.

The heart rate monitor of this SFW220 is therefore of poor quality, because it calculates a heart rate far from reality. Worse, it creates very annoying artifacts for a serene reading of our heart health. Even at rest, we do not advise you to rely on this watch to follow your little heart.

These were the details of the news Lab – What is the heart rate monitor of the Lidl Silvercrest SFW220 connected watch worth? for this day. We hope that we have succeeded by giving you the full details and information. To follow all our news, you can subscribe to the alerts system or to one of our different systems to provide you with all that is new.