The hidden question that Apple M1 raises: but what has Intel... 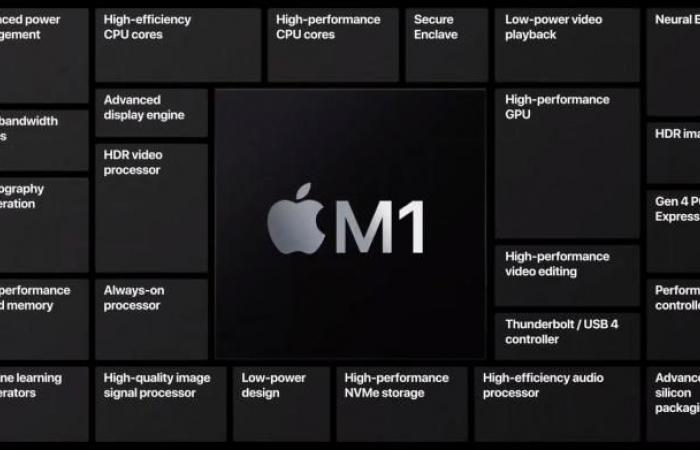 Apple has released a new processor for its Mac range which undoubtedly beats the Intel chips that previously equipped these machines. And this, both in terms of performance and energy consumption.

But what has Intel been doing all these years? I think it’s safe to say that Apple’s new M1 chip is “disruptive”. After all, it’s a first-generation product that puts a blow on a large company that does little more than chip manufacturing. I’m targeting Intel here, but the same arguments could apply to AMD as well, and even Qualcomm.

How did it happen? Let’s start with the most obvious.

As powerful as Intel and the other chip giants are, they are not as powerful as Apple. The apple company has a lot of money to put into R & D, with a very specific objective: a chip to put Intel aside. That money, along with the focus on making a single chip, also allowed Apple to write a check to TSMC to make 5-nanometer engraving possible.

Because the 5 nanometer architecture was the cornerstone of the realization of the Apple M1 chip. Speaking of TSMC, the company has had a close relationship with Apple since Samsung was cut out of making iPhone chips in 2014, with the A8 chip for the iPhone 6. The company has a proven track record in producing tens of millions of chips every year. Being able to guarantee this type of volume, adapting to fluctuations in demand and reaching the target in terms of annual releases are all things that make Apple’s job easier.

Then there’s the fact that Apple and Intel are doing totally different businesses. Intel mainly makes chips for PC makers, and it’s hardly a high-margin industry. Apple, on the other hand, makes products that generate high profit margins. Intel has to satisfy an industry that doesn’t just demand cheap components, but can’t afford much more.

Intel’s days in Macs are numbered

So Intel focused on small incremental improvements. The same could be said of AMD’s PC customers and Qualcomm’s Android smartphone makers. There just wasn’t enough money to make such performances worthwhile.

I have read a lot about the internal battles between Apple and Intel over the years. And, while there is no doubt that a lot has happened between the two companies since Macs switched to Intel chips, such a big, complex, and expensive change is not going to take center stage in the media. This change was postponed for many years, and the more powerful Apple got, the more complex and timely its supply chain became, and the more it made sense.

And now that it’s happened, nothing can stop it. Intel’s days in Macs are numbered.

Intel could have done it, but we wouldn’t have paid for it

It’s hard to say what this means for the PC industry in general. I have no doubt that OEMs would like to ship chips that give them the power that the Apple M1 gives to Macs. But, could he afford them? Or would customers pay them? Well, I doubt it, given the trajectory of the market.

But to answer the question, what Intel has been doing all these years, well, is making chips for an industry that is primarily price sensitive, and where tiny incremental improvements have been enough to make everyone happy, from OEMs to end users. It’s not so much that Intel couldn’t have made an integrated circuit like the Apple M1, it’s just that we probably wouldn’t have wanted to pay for it.

All about the new Apple M1 chips

*The article has been translated based on the content of Source link by https://www.zdnet.fr/actualites/la-question-cachee-que-souleve-apple-m1-mais-qu-a-fait-intel-pendant-toutes-ces-annees-39913325.htm
. If there is any problem regarding the content, copyright, please leave a report below the article. We will try to process as quickly as possible to protect the rights of the author. Thank you very much!

These were the details of the news The hidden question that Apple M1 raises: but what has Intel... for this day. We hope that we have succeeded by giving you the full details and information. To follow all our news, you can subscribe to the alerts system or to one of our different systems to provide you with all that is new.