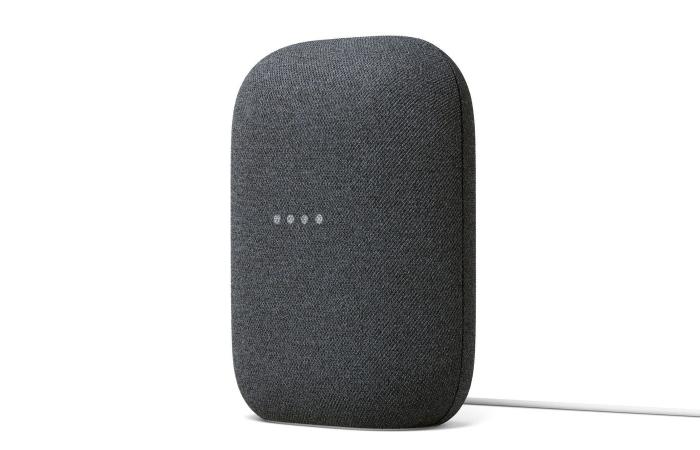 Smart speakers are really judged by three things: how they look, how they sound, and what else they can do.

Nest Audio is the latest offering from Google and scores in all three categories, but is particularly aimed at audiophiles.

It has a rectangular shape, curved edges and a fabric finish, and will blend in well with most living spaces.

It doesn’t have much to do with buttons – just the ones on the back that mute the microphone.

Otherwise, you control it via voice, via the Google Home app, or via three capacitive touch sensors arranged around the device for volume and play / pause.

I found these a little awkward to locate at first and also found that they required a decent firm touch to register an action, but I got used to them.

Under the mesh on the front there are some LEDs that light up and become visible when something is done.

The device is available in two colors – chalk and charcoal.

What is interesting is that the case, including the fabric, case, base and some other small parts, is 70% recyclable.

The loudspeaker consists of a 75 mm woofer and a 19 mm tweeter.

If that doesn’t mean a lot to you, suffice it to say that it delivers a loud, deep, crisp and clear sound.

According to Google, the bass is 75% louder and has 50% stronger bass than the original Google Home.

It doesn’t quite reach the quality of high-end audio, but it is more than enough for most of us.

It is also practical that the device can be paired with another to obtain a stereo pair with left and right channel separation.

Nest Audio can also be grouped with other Nest devices or with a TV with Chromecast if you want to play sound in multiple rooms.

Music can also be moved from one Nest device to another by moving rooms using the Home app, a Nest touchscreen, or voice.

It also has three far-field microphones built in and is pretty good at picking up your voice, even in a noisy environment.

It’s pretty simple and straightforward to set up and it’s done through the Google Home app.

With Nest Audio from Google, you can control any other Nest device you might have, such as your home. B. the Smart Thermostat and Chromecast.

But it also integrates well with many other smart home brands, including Philips Hue and KASA via Google Assistant, so you can use it to control other aspects of your smart home.

You can also call other Google Duo compatible devices through the speaker.

If you don’t like the idea of ​​her always listening to you, you can turn off the microphone using the physical switch on the back.

The activity history can also be viewed in the Home app and deleted if desired.

This app is available for both Android and iOS.

The smart speaker market is crowded and breakneck.

Nest Audio is a huge improvement over its predecessor, with decent sound quality, ease of use, and a host of smart features.

But there is a lot of competition from Apple, Amazon, Sonos, and others.

Even so, if you want to be sure that you are getting the best bang for your buck, shopping is wise.

These were the details of the news Review: Nest Audio | DE24 News for this day. We hope that we have succeeded by giving you the full details and information. To follow all our news, you can subscribe to the alerts system or to one of our different systems to provide you with all that is new.