Marvel Realm of Champions is finally available for pre-registration 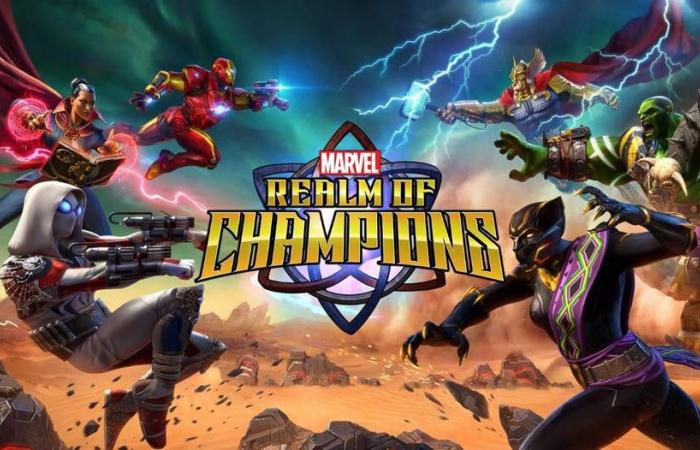 A new superhero role-playing game with real-time action was unveiled at New York Comic-Con. More will be shown on October 4 at 3 p.m. ET on the Marvel Games Panel

Orientate yourself to your Marvel House by visiting booth # 556

NEW YORK – OCT. Sep. 3, 2019 – Kabam, developer of the award-winning mobile fighting game MARVEL Contest of Champions, is partnering with Marvel Entertainment on their second game: MARVEL Realm of Champions. Developed as a mobile real-time role-playing game for longtime Marvel fans and avid mobile gamers. Players will team up with Marvel-inspired factions known as “Houses” and team up with friends to wage real-time action arena battles against enemies and other players in an epic war of global proportions in the Battleworld. New York Comic-Con attendees can sign up for their favorite house from October 3rd to 6th at booth (No. 556) and learn more.

MARVEL Realm of Champions is a bold new take on the Marvel Universe that transports players to Battleworld, a forbidden planet beyond the space-time barrier where its troubled peace is disrupted by the death of Maestro, the God-King. With alliances between the Houses including the House of Iron (Iron Man), the Spider-Man’s Guild (Spider-Man), the Patriot Garrison (Captain America), the Pyramid X (X-Men) and more, it’s pure war on the whole Land for complete global domination. As a champion aligned with one of the houses, players will work together or fight against each other to collect resources for their faction across Battleworld.

After equipping their champion with Super Hero-inspired gear, players will team up with their friends to explore Marvel-inspired landscapes such as high-tech cities based on Stark Technologies, fantasy-inspired Asgardian battlefields, and more explore. On the map, players can compete in localized battle arenas in various player versus environment (PvE) and player versus player (PvP) modes, with each battle contributing to the greater conflict between the houses. By strategically using character class skills against enemies for better teamwork and maximum impact, players can live out their fantasy of becoming their own Marvel superhero, form diplomatic alliances and lead their house to victory in the Battleworld in the MARVEL Realm of Champions.

“As the MARVEL Contest of Champions celebrates its fifth big year, it is exciting to see Kabam expand its ongoing story and invite players to become their own Marvel Super Hero to battle for the fate of Battleworld,” said Bill Rosemann, VP of Creative at Marvel Games. “From the gleaming skyscrapers of the House of Iron to the networked alleys of the Spider’s Guild, both committed gamers and casual fans are waiting for an entire planet to explore and conquer. Whose house will you choose? ”

ABOUT KABAM
Kabam is a leading global provider of fun, immersive and highly social multiplayer games for mobile devices. They combine consumer behavior with the art of game design to create experiences that millions of gamers around the world enjoy. Every game has raised the bar for mobile gaming, bringing high quality consoles, next generation technology and revolutionary gameplay to every gamer’s pocket.

Kabam has partnered with leading entertainment brands like Disney, Hasbro, and Universal to create mobile games based on some of the world’s best-known franchises.

Kabam’s games have generated hundreds of millions of downloads, including Fast & Furious 6: The Game, Fast & Furious: Legacy, Marvel Contest of Champions, and Transformers: Forged to Fight. These games have also won multiple awards, including Apple’s Editors’ Choice and Google Play’s Best Game of the Year.

Kabam was founded in 2006 and has studios and offices in Vancouver, Montreal, Charlottetown, San Francisco and Austin, Texas. Kabam is a wholly owned subsidiary of Netmarble.

Via Marvel Entertainment
Marvel Entertainment, LLC, a wholly owned subsidiary of the Walt Disney Company, is one of the world’s best-known character-based entertainment companies based on a proven library of more than 8,000 characters featured in various media for over eighty years. Marvel leverages its character franchise in entertainment, licensing, publishing, games, and digital media.
Visit Marvel.com for more information. © 2019 MARVEL

About the Netmarble Corporation
Netmarble Corporation strives to entertain audiences of all ages around the world by delivering great mobile gaming experiences. Founded in Korea in 2000, Netmarble is one of the fastest growing mobile game companies. The company is one of the world’s leading developers and publishers of mobile games. With more than 6,000 employees, Netmarble has produced and maintained some of the most successful mobile games, including Lineage 2: Revolution, Blade & Soul Revolution, MARVEL Future Fight, BTS WORLD, Everybody’s Marble and Seven Knights. Netmarble is a parent company of Kabam, a leading developer of mobile games for massively multiplayer free-to-play games, and the largest shareholder in Jam City, a leading developer of casual social games company, Tencent Holdings, Asia’s largest Internet company, and NCsoft, a well-known MMORPG company. More information is available at http://company.netmarble.com

These were the details of the news Marvel Realm of Champions is finally available for pre-registration for this day. We hope that we have succeeded by giving you the full details and information. To follow all our news, you can subscribe to the alerts system or to one of our different systems to provide you with all that is new.