Engineers developing a squid-like robot to take photos of fish and... 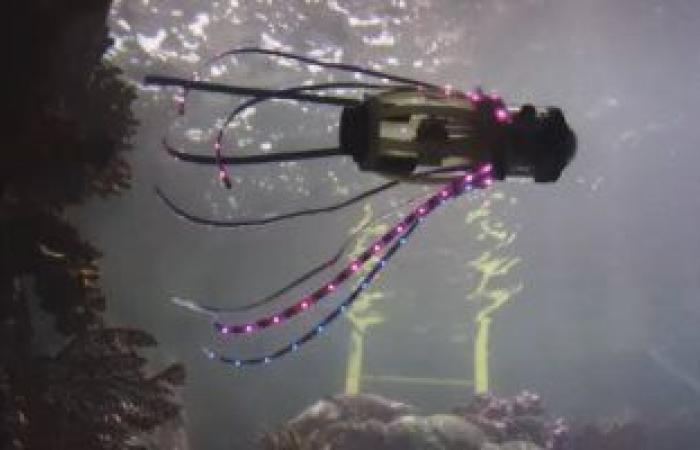 Engineers from the University of California, San Diego have created a self-moving squid-like robot that relies on launching bursts of water, provides a battery within the robot as a source of energy, and carries a camera for underwater exploration, and the researchers published their research in the journal Bain Inspiration and Biometrics, which publishes research on biology and biological systems..

“We developed the robot to be able to swim quickly, and to be the first unrestrained robot that generates jet impulses to move quickly like a squid by changing its body shape,” said Michael T. Tolle, one of the most prominent authors of the research and a professor in the Department of Mechanical and Aerospace Engineering at the University of California..

The Squid robot is made of a soft material called an acrylic polymer, with hard few parts made by 3D printing.

The purpose of using soft robots is to avoid harming fish and coral reefs, which may be damaged by hard robots. The research team, which includes robotics experts and experts in computer simulations and experimental fluid dynamics, used the squid model for its velocity thanks to the propulsion mechanism..

The researchers designed the robot in the form of a squid that resembles a paper lantern, and it has flexible ribs that pump water along its sides.These ribs are attached to two circular panels at the ends of the robot, one of which is connected to a nozzle that draws water and ejects it when the robot shrinks, while the other plate carries a waterproof camera or another type of Sensors.

The robot absorbs a quantity of water and stores it in its flexible skin and ribs, then presses its body and releases a burst of water and it rushes forward..

Engineers tested the robot for the first time in a water laboratory in Professor Gino Pawlack’s laboratory in the Department of Mechanical and Aerospace Engineering at the University of California, San Diego, and then in the Birch Aquarium at the University’s Scripps Institution of Oceanography at the university, and demonstrated that the robot’s orientation occurred by altering the direction of the crater. The robot’s swimming speed is from 18 to 32 cm per second, which is thus faster than most other robots.

“We succeeded in developing the robot to be able to swim in a large aquarium between coral and fish, which proves its effectiveness in the real world,” said Caleb Christianson, the study’s supervisor as part of his doctoral thesis.

The researchers, under the supervision of Professor Shan Su and his team at the Department of Structural Engineering at the University of California, San Diego, conducted several experiments to reach the optimum size and shape of the nozzle that would guide the robot, which helped them increase its efficiency and maneuverability and walking ability, by simulating this type of jet propulsion..

These were the details of the news Engineers developing a squid-like robot to take photos of fish and... for this day. We hope that we have succeeded by giving you the full details and information. To follow all our news, you can subscribe to the alerts system or to one of our different systems to provide you with all that is new.