Willian and Marcos Alonso in alongside Manchester City pair and Watford duo: Premier League team of the week 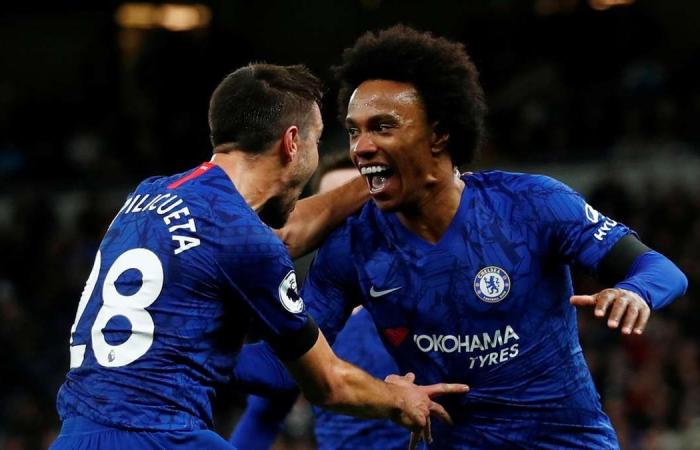 Thank you for your reading and interest in the news Willian and Marcos Alonso in alongside Manchester City pair and Watford duo: Premier League team of the week and now with details

Right-back: Matt Doherty (Wolves) – The Irishman was involved in the start and the end of the move that brought Raul Jimenez’s winner at Norwich and which completed a comeback. AFP

Centre-back: Ben Mee (Burnley) – The captain was a rock at the back as Burnley subdued Bournemouth before Jay Rodriguez pilfered a late winner for the Clarets. Reuters

Left-back: Marcos Alonso (Chelsea) – A surprise selection who justified his choice. Won a penalty against Tottenham and was terrific both going forward and defensively. Reuters

Right midfield: Riyad Mahrez (Manchester City) – Produced one of his best displays for City as he scored the equaliser against his old club Leicester and tormented Ben Chilwell. Reuters

Left midfield: Willian (Chelsea) – Two well-taken goals, some brilliant skill and some wonderful passing as he inspired Chelsea to a derby victory over Tottenham. Reuters

Striker: Ismaila Sarr (Watford) – Showed why Watford made him their record signing, scoring, albeit aided by a goalkeeping error, and winning a penalty against Manchester United. Reuters

Striker: Danny Ings (Southampton) – His brace defeated Aston Villa, lifted Southampton out of the bottom three and made him the joint second top scorer in the league. Reuters

These were the details of the news Willian and Marcos Alonso in alongside Manchester City pair and Watford duo: Premier League team of the week for this day. We hope that we have succeeded by giving you the full details and information. To follow all our news, you can subscribe to the alerts system or to one of our different systems to provide you with all that is new.

PREV The Football Association reveals the number of relegations from the new...
NEXT Winch Zamalek shock .. X-rays prove that he had a cut...