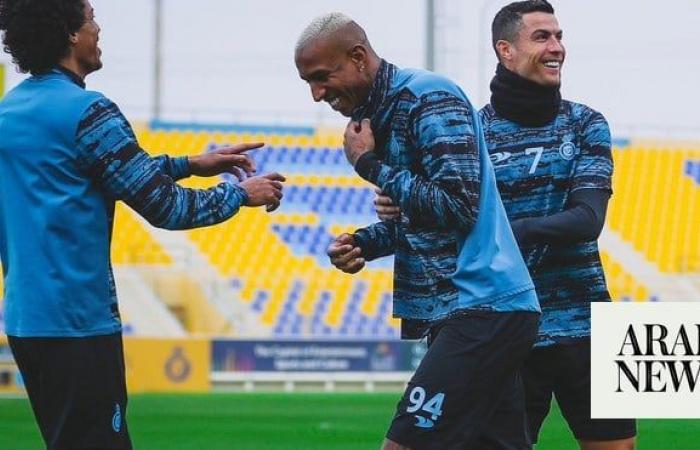 Jeddah - Yasmine El Tohamy - RIYADH: The Saudi Super Cup has expanded from two to four teams at the perfect time.

On Thursday, league champions Al-Hilal take on Al-Feiha, but it is the other semi-final, a clash between Al-Nassr and Al-Ittihad, that has captured the public’s attention. And for good reason.

Whatever the outcome, it will mean Portuguese hands will be close to the trophy, whether they belong to Cristiano Ronaldo or Al-Ittihad coach Nuno Santo.

Ronaldo’s performance in last Sunday’s 1-0 win over Ettifaq, his competitive debut since signing for Al-Nassr at the end of December, was watched around the world.

This should be a bigger test; a high-profile contest between the league leaders and third-place Al-Ittihad, though as these two have the best defensive records in Saudi Arabia, do not expect too many goals. But then this is the cup, and anything could happen.

No one would pretend that this is the biggest prize on offer in Saudi Arabian football. It used to be that the final was played out between the winners of the league and King’s Cup from the previous season but the runners-up in each competition are now allowed and as Al-Hilal are both champions and cup runners-up, that gives an extra-space for Al-Nassr.

Still, it would be a very welcome addition to the trophy cabinets in both Riyadh and Jeddah.

It would take away some of the pressure around both clubs. For Al-Nassr, the reason for that is obvious. Signing one of the best players in the history of the game means that you are under the spotlight and expectations have skyrocketed.

The image of a smiling Ronaldo, who has won most of the titles that it is possible to win in Europe, lifting a trophy just a week after his debut, would be beamed around the world. It would set the tone nicely for the rest of the season.

It is not just about the five-time Ballon d’Or winner either. Coach Rudi Garcia, who has led major European teams such as Marseille, Roma, and Lyon, already had a star-studded squad at his disposal.

The likes of Anderson Talisca, Pity Martinez, and Luiz Gustavo have experience at the top of the world game and there are several Saudi internationals, six of which went to the World Cup. This is a squad that should be winning things and expects to do so.

There is also David Ospina. Or rather was. The Colombian goalkeeper, who arrived last summer from Napoli and has impressed, fractured his elbow in the 0-0 draw with Al-Shabab on Jan. 14 and is going to be out for the rest of the season.

Rather than allow Nawaf Al-Aqidi to step in — after the 22-year-old performed well at the recent Gulf Cup — Al-Nassr have moved quickly to bring in a South American replacement. Agustin Rossi arrives from Boca Juniors on loan until the end of the current campaign and could make his debut as early as Thursday and if all goes well for his team, will be in the final on Sunday.

Al-Ittihad will have something to say about that. Coach Nuno has done what many who have seen his work in his native Portugal, as well as in the English Premier League with Wolverhampton Wanderers and Tottenham Hotspur, will have expected. The Tigers have become hard to score against and hard to beat.

The Egyptian duo of Tarek Hamad and Ahmed Hegazi offer stability and solidity at the back. Five goals in the last two games suggest that they are becoming more fluent going forward too with the free-scoring Abderrazak Hamdallah doing what he does best, ably supported by Brazilian stars Romarinho and Igor Coronado.

For Nuno too, the trophy would give him something to show as he fine-tunes his team for the title race. He will have known before taking the job last summer that Al-Ittihad have not won the championship since 2009, coming closer than ever last season before blowing a double-digit lead at the top in heart-breaking fashion.

Until he arrived by the Red Sea, he would not, however, have felt the desperation in the port city.

Of course, the famous Portuguese new arrivals may not fully appreciate the hurdle that is Al-Hilal. The 18-time champions are a trophy-collecting machine and also have unfinished business against Al-Feiha, their opponents on Thursday.

When the two met in the King’s Cup final last May, Salem Al-Dawsari gave Al-Hilal a first half lead only for Ramon Lopes to equalise in front of almost 50,000 in Jeddah. Al-Feiha went on to win the penalty shootout 3-1.  It was one of Saudi football’s biggest shocks in recent years.

The defeat was made less painful as Al-Hilal won the league, but the Riyadh giants would love to serve some cold revenge and to earn a mouth-watering final against either their huge rivals from Riyadh or Jeddah. Lifting the Saudi Super Cup would also be perfect preparation for the upcoming FIFA Club World Cup.

Al-Feiha may be down in 13th but are in great form. After collecting just two points from the first eight games of the season, they had won four of the previous five before losing to Al-Ittihad last week.

The King’s Cup triumph last season brought their first ever piece of major silverware. A second would be cause for huge celebration.

Thursday is shaping up to be one of the most exciting football days of the season.

These were the details of the news Expanded Saudi Super Cup offers Ronaldo and co chance of mid-season glory for this day. We hope that we have succeeded by giving you the full details and information. To follow all our news, you can subscribe to the alerts system or to one of our different systems to provide you with all that is new.