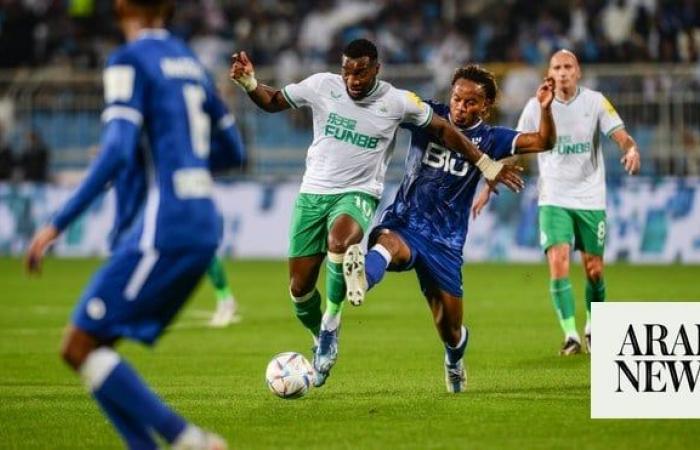 Jeddah - Yasmine El Tohamy - RIYADH: Newcastle United look set to return to the UK from their training camp in Saudi Arabia facing a striker crisis, with Chris Wood becoming the latest casualty during the Magpies’ victory over Al-Hilal in their friendly on Thursday.

Joelinton, who also left the game following a knock, grabbed a first-half double at the Prince Faisal Bin Fahd Stadium before Miguel Almiron netted another brace and youngster Dylan Stephenson rounded off a 5-0 victory that ensured the Magpies lifted the Diriyah Season Cup.

But the bigger news from a United perspective was the injury to New Zealander Wood, who in the absence of Callum Wilson and Alexander Isak, looked set to lead the Magpies when senior football resumes following the World Cup break. United are due to face Bournemouth in the Carabao Cup in just 13 days and return to Premier League action against Leicester City three days later.

The severity of the injury to Wood is yet to be determined but a lengthy spell for him on the sidelines would be a disappointing and troublesome end to what has otherwise been an incredibly positive trip to Riyadh.

United fans will also be hoping that Brazilian wonder Joelinton’s departure from the game was simply precautionary, although the sight of him limping midway through the second half will cause concern.

United donned their third jersey, often dubbed the “Saudi kit,” for the match against the Saudi Pro League champions and handed a debut to Loris Karius in goal, with Eddie Howe keen to extend the former Liverpool keeper’s stay on Tyneside. Matt Targett and Karl Darlow missed out through illness.

This is the second visit by the Magpies to the Kingdom this year, after spending two weeks in Jeddah in January, and they have enjoyed a warm welcome in the capital. This was more than evident in the stands on Thursday where local and foreign fans wearing black and white could be seen scattered among the Blue Power, the vocal heart of the lively home faithful.

Jacob Murphy, Howe’s most-used player during his 13 months as head coach, came within inches of breaking the deadlock with the first meaningful attack of the match. He clipped the ball under Abdullah Al-Mayouf in goal but the keeper got a touch that just prevented the ball from crossing the line and he gathered at the second attempt.

Murphy then turned provider and Joelinton made no mistake with a powerful header after the winger dinked the ball in from the right.

While the final result betrayed the gulf in class between the sides, it was far from evident during a close first 45 and the visitors had Karius to thank for keeping things level early on. They will doubtless have been delighted to see him display some surprise sharpness, despite not having started a competitive game since February 2021.

Star player Odion Ighalo was the first to test Karius, with a low drive that was stopped by the United keeper. Al-Hilal caused the visitors some problems down the left but it was a move down the right that should probably have been rewarded with a penalty. Sven Botman felled the tricky Matheus Pereira but referee Alturais Khalid was not interested.

Just before the break the lead doubled as Joelinton beat Al-Mayouf after breaking clear of the Al-Hilal back line thanks to a precise through ball from Joe Willock.

Karius then had to be at his best once again to deny Andre Carrillo, tipping the ball around the post as the hosts ended the half as the dominant force.

Changes during the break, including the introduction of Almiron, one of the most in-form players in the English top flight, had an immediate effect when play resumed.

The Paraguayan clipped the bar with a trademark curling effort on 50 minutes, before he stole the ball from Carrillo, jinked past another defender and stroked home a third goal for the Magpies.

Elliot Anderson then hit the upright but his deflected effort rebounded clear of danger despite the lurking United forwards.

It seemed like only a matter of time before United added to their tally, though, and, sure enough, Almiron latched onto a cross-field ball by Sean Longstaff and volleyed it home to make it 4-0.

The last word was reserved for one of the Newcastle youngsters to come off the bench, as Ryan Fraser, also introduced as a substitute, squared the ball for Stephenson to tuck in his first goal at senior level.

Fireworks and ticker tape greeted Newcastle as they raised the golden trophy, which they will be hoping is the first of many under Saudi ownership and head coach Howe.

While trophies are the ultimate ambition, of course, in the shorter term Howe will be hoping for good news about the injuries to Joelinton and Wood, both of whom have proved to be crucial cogs in the Newcastle machine over the past year.

These were the details of the news Injury fears cast a shadow across Newcastle victory over Al-Hilal in Riyadh for this day. We hope that we have succeeded by giving you the full details and information. To follow all our news, you can subscribe to the alerts system or to one of our different systems to provide you with all that is new.