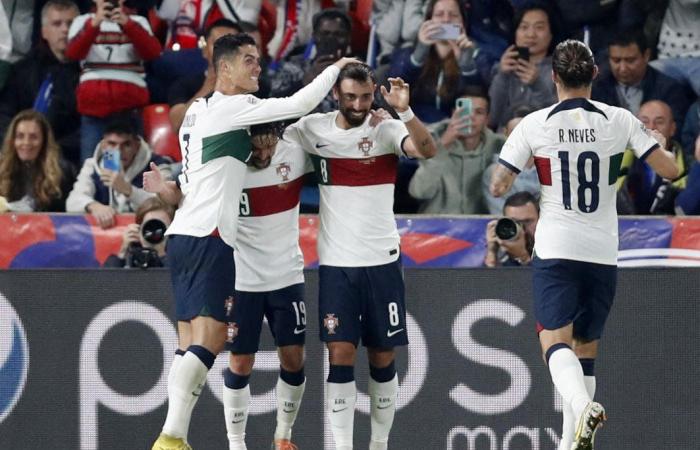 Jeddah - Yasmine El Tohamy - PARIS: Amid mounting injuries and off-field problems, at least France coach Didier Deschamps has one less thing to worry about heading into the World Cup.
Aurélien Tchouaméni looks a very good option to start in midfield.
Tchouaméni is 22 with only 13 caps but is already playing with the maturity of a seasoned international and, with Paul Pogba’s place in Qatar looking in doubt, his form is most welcome for Deschamps.
Tchouaméni was excellent as France, missing nine regulars including goalkeeper Hugo Lloris, striker Karim Benzema, N’Golo Kante and Pogba, beat Austria 2-0 in the Nations League on Thursday night.
The young midfielder gets another chance to push his claim for a permanent starting place when Les Bleus travel to play Denmark in Copenhagen on Sunday for the last group game in the Nations League — the last match for both sides before the World Cup.
It should be a competitive game, too, with the Danes still in contention for first place in Group 1 and a place in next year’s Final Four.
Defending champion France already lost their title in June and are fighting with Austria to avoid relegation to the second tier. Last-place Austria, one point behind France, host Croatia, which hold top spot but are only one point ahead of Denmark.
His own form and other circumstances have accelerated Tchouaméni’s international career.
Pogba is recovering from a knee injury and is weighed down by an extortion probe involving his elder brother Mathias.
Tchouaméni is the latest in a long production line of talent to emerge from the French league, following in the footsteps of Benzema, Kylian Mbappé, Anthony Martial and many others.
Like Mbappé and Martial, he came through at Monaco — which boasts one of the finest scouting networks in Europe.
Real Madrid paid 100 million euros ($97 million) to sign Tchouaméni in the offseason and then sold Casemiro to Manchester United.
That Madrid fans are hardly missing Casemiro speaks volumes for how easily Tchouaméni has settled into a side leading the league with six straight wins.
So what makes Tchouaméni so good?
He is the complete midfield package. But perhaps his greatest attribute is composure.
He showed that on his first start for France in a World Cup qualifier away to Ukraine one year ago, when it looked like he’d been playing at international level for years.
In a similar way to Pogba, he is a tall, lean and athletic player who always plays with his head up. He has an assured first touch wherever he receives the ball, and sprays passes short or long with equal effect.
He showed that against Austria by pinging a 50-meter pass to Mbappé that landed not only at the forward’s feet, but into his path as he was running onto it. That was just minutes into the game, when lesser players would have been settling down.
Rarely wasteful, Tchouaméni has the same knack as Kanté for knowing when to release the ball quickly and offload it to a better-placed teammate.
It may look obvious, but it ensures that — like Kanté — Tchouaméni’s rarely caught in possession and his calmness enables him to shake off players closing him down around the penalty area.
Even under pressure from an Austria striker on the edge of his own box, Tchouaméni dropped his shoulders, turned and completed a clean pass as casually as if it was a pre-season training session.
He drops deep to collect, is quick and covers ground well with his rangy running style.
Tchouaméni’s good at making late runs into the opposing area and he’s not afraid to shoot, either, having one 20-meter effort saved and then hitting the crossbar against Austria with a spectacular overhead kick that displayed technique befitting an attacking player.
Another bright spot for Deschamps was the form of Benoît Badiashile in a three-man defense and his Monaco teammate Youssouf Fofana in central midfield.
The left-footed Badiashile impressed with his passing out from the back while, Fofana won the ball effectively.
Olivier Giroud also staked a strong claim to be in the World Cup squad with a goal and assist against Austria. He’s on 49 international goals, just two behind Thierry Henry’s national record.
Giroud and Tchouaméni could have a big part to play in Qatar.

These were the details of the news Portugal cruise past Czechs as Dalot bags brace for this day. We hope that we have succeeded by giving you the full details and information. To follow all our news, you can subscribe to the alerts system or to one of our different systems to provide you with all that is new.