Usyk and Joshua get ready to rumble in Jeddah 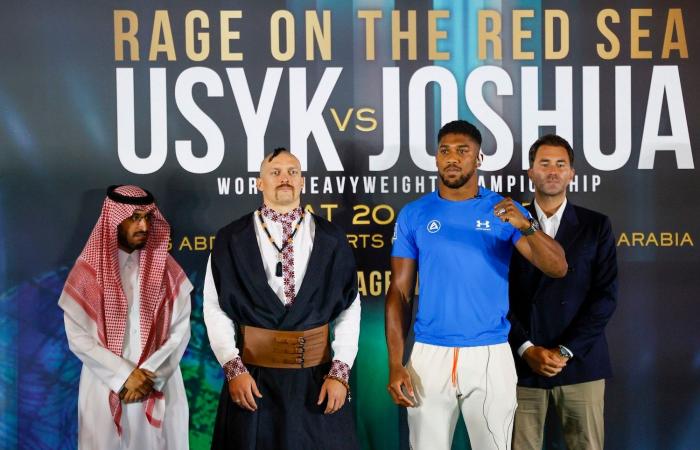 Jeddah - Yasmine El Tohamy - Slowly, the picture at Barcelona is getting clearer — and for coach Xavi Hernandez, better. At least we know which players are eligible to pull on the shirt officially.

It has been a long and confusing road, which finally reached an end, of sorts, with the disappointing 0-0 draw against Rayo Vallecano on Saturday night.

On Oct. 6, 2021, FC Barcelona President Joan Laporta gave a press conference with then-CEO ​​Ferran Reverter, in which he said the club was in “accounting bankruptcy” and owed $1.5 billion because of the previous board’s mismanagement.

Laporta had only returned to the presidency a few months earlier, in March 2021, and since then it has been one setback after another for the Catalan club.

First was the earth-shattering news last summer that Lionel Messi was leaving Camp Nou. Worse followed as the club, with no money, could not replace the glaring hole left by the Argentine with any big-name signings.

The president who had brought joy back to the club in 2003, who oversaw the iconic Pep Guardiola era, was now a man who only reported bad news.

That is until this summer, when Laporta worked his magic again and pulled a rabbit out of his hat — or at least pulled those financial “levers” we have heard so much about recently.

Only months after Laporta made the club’s technical bankruptcy official, Barcelona somehow became, to global astonishment, the highest-spending club this summer: Raphinha came from Leeds for $59 million, Jules Koundé from Sevilla for $55 million, and Robert Lewandowski from Bayern Munich for $46 million.

Chelsea’s Marcos Alonso and Manchester City’s Bernardo Silva could be the next to arrive if rumors are to be believed.

So how did the bankrupt club become one of the world’s biggest spenders? In a word, levers. Or, in effect, selling future income.

The first two levers allowed the club to cash in $535 million by selling 25 percent of its TV rights for the next 25 years to the US investment fund Sixth Street.

Barcelona currently earn $167 million a year from TV broadcasting rights. At these prices, Sixth Street would receive $1.05 billion over the next 25 years, double what was invested in the lever.

In a few short weeks, fans had to become familiar with a process — all above board, everyone was assured — few had heard of before.

But legal concerns aside, is it reasonable, even ethical, for a bankrupt club to become the summer’s highest spending club? It does not sound like financial common sense.

To understand the necessity for these levers, it is first necessary to understand how the club works.

Barcelona, like Real Madrid, is fully owned by its members, and the statutes prohibit transforming the club into a “sports company” — like Chelsea. In short, it is not possible for another company to buy capital from the club.

In addition to these episodes of creative accounting, the fact remains that the club gave up part of its future TV income in an effort to create a new “virtuous circle” of victories and income that is far from guaranteed.

The idea that Barcelona’s salvation lies in mortgaging income for the next 25 years is a gap in the Laportian economic reasoning that is difficult to fill.

The president’s plan is to make the club sexy again, giving it a reboot of sorts that will ensure the new star signings will further attract resources and new fans, and create bonds and new incomes that exceed those now mortgaged.

All experts, critics and even supporters of Laporta agree this is a high-risk operation. If the team does not perform on the pitch, the house of cards could fall apart.

The 0-0 against Rayo Vallecano will hardly have placated the critics. With over $150 million spent on five signings this summer, expectations were sky-high at Camp Nou in the first game of the new La Liga season.

In front of a full house at Barça’s dilapidated stadium, Hernandez started three of their new signings, but Andreas Christensen, Raphinha and Lewandowski could not help the team achieve victory in drab performance.

Laporta has taken a massive risk, and it could well be his last card. His critics await. Should it fail, Barcelona might just have to face the possibility of becoming a sociedad anónima deportiva (sports company) owned by outside forces, something unimaginable until recently. And Laporta will go down in history as the villain who allowed it to happen under his reign.

These were the details of the news Usyk and Joshua get ready to rumble in Jeddah for this day. We hope that we have succeeded by giving you the full details and information. To follow all our news, you can subscribe to the alerts system or to one of our different systems to provide you with all that is new.