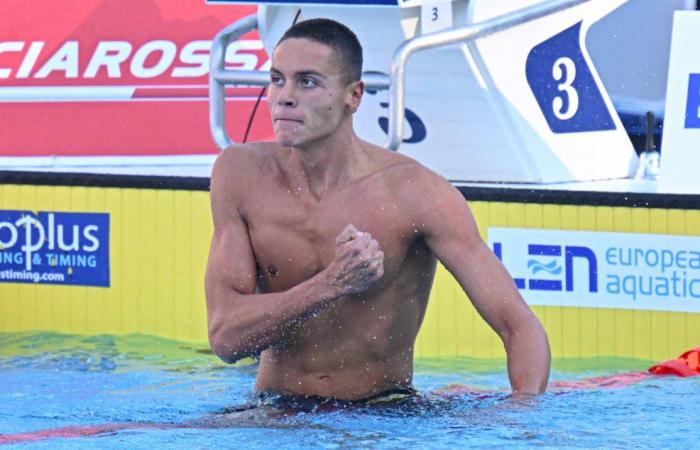 Jeddah - Yasmine El Tohamy - ROME: David Popovici reacted with “euphoria” after swimming the “best race I ever did” to break the men’s 100m freestyle world record at the European Championships in Rome on Saturday.

“It’s nice being able to say that I am the fastest to ever do it,” Popovici said.

The 17-year-old Romanian double world champion swam 46.86sec to slice 0.05sec off the old mark set by Brazilian Cesar Cielo in the 2009 World Championships, also in Rome, in the era of buoyant body suits.

“It was great and it’s very special to break this record that was set here in 2009 by Cesar Cielo,” Popovici added.

“That was euphoria just kicking in. Simply that.”

“There’s not really a lot of adjectives I can give on how I’m feeling. I’m simply just happy,” said Popovici, who speaks faultless and exuberant English.

The fastest time in a textile suit had been 46.96 set by American Olympic champion Caeleb Dressel at the 2019 World Championships.

“I planned to go very fast and I planned to have fun and that was really about it,” said Popovici.

“It hurt, but it’s still worth it and I feel good now.”

Hungary’s Kristof Milak, the world record holder in the 200m butterfly, was second in 47.47 with Italy’s Alessandro Miressi third 47.63.

“Just after I finished, Kristof Milak said to me welcome to the club.”

Asked if he had swum the perfect race, Popovici replied: “I think so, yeah.”

But then he added: “Well my coach has to decide that but for the moment I think it’s probably the best race I ever did.

Popovici had eased into the final on Friday with a new European record of 46.98 seconds.

“Yesterday I said that the European record was just a step in the right direction, and I was right,” Popovici said.

In June, Popovici became the first man to complete the 100-200m freestyle double at the World Championships in nearly 50 years.

In Rome, he is also entered in the 200m which starts on Sunday and 400m which begins on Wednesday but refused to predict any more world records.

“I think I still like the 200 more but I have to get a little bit closer to the world record maybe not tomorrow, maybe not the day after tomorrow but I have a lot of time, so there is no rush,” said Popovici, who is expected to compete in the world junior championships in Peru starting at the end of August.

Italian Benedetta Pilato won the women’s 100m breaststroke in 1:05.97, more than a second-and-half outside the world record set by American Lilly King in 2017.

Swedish veteran Sarah Sjostrom won the women’s 50m butterfly gold for the fifth time in 24.96. The 28-year-old is the only woman to go under 25 seconds in the event in a 50m pool.

Frenchman Yohann Ndoye Brouard won the opening final of the evening when he took the men’s 200m backstroke in 1 min 55.62 sec.

Viktoria Milhalyvari-Farkas, an 18-year-old, led a Hungarian one-two in the women’s 400m individual medley ahead of Zsuzsanna Jakabos with Freya Colbert of Britain third.

The British ended the evening by edging the Swedes and the Dutch to win the women’s 400x100m freestyle relay.

These were the details of the news Popovici on top of the word after record-setting effort in 100m freestyle for this day. We hope that we have succeeded by giving you the full details and information. To follow all our news, you can subscribe to the alerts system or to one of our different systems to provide you with all that is new.