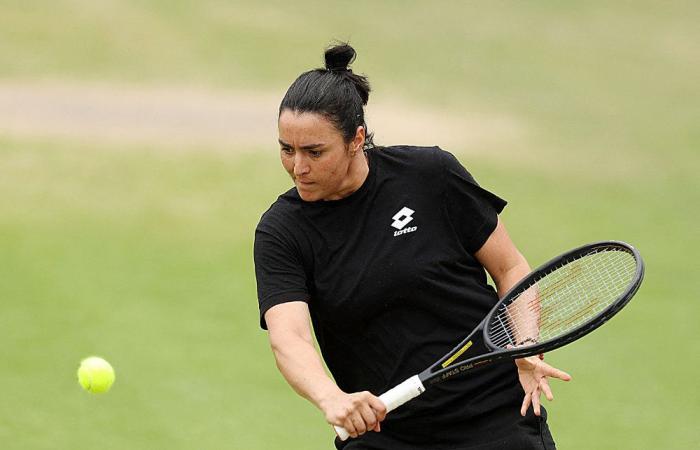 Jeddah - Yasmine El Tohamy - HAMMAM SOUSSE, Tunisia: Ons Jabeur will make history on Thursday when she walks on to the Centre Court at Wimbledon as the first Arab woman to compete in a Grand Slam semifinal.

Fifteen years ago, Ons Jabeur’s young tennis sparring partner could see the Tunisian was destined for glory — even if he suffered a broken arm in the process.

Omar Laabidi remembers being repeatedly beaten by a 12-year-old Jabeur.

“We used to call her ‘Roger Federer’,” Laabidi said.

He was talking at the tennis club where it all began, in the North African country’s coastal town of Hammam Sousse.

Jabeur had started by playing on courts belonging to local hotels but she soon joined the Tennis Club Hammam Sousse, which now bears a huge portrait of its most famous graduate.

Coach Nabil Mlika recalls training a talented girl “determined to stand out” against both female and male peers.

It is a determination that has taken her all the way to the world No. 2  spot — one place behind Poland’s Iga Swiatek.

“Ons thought seriously about switching sports — but decided to stick to tennis.”

The 27-year-old Tunisian’s fighting spirit has been on show throughout her career.

Despite crashing out in the first round of the French Open in May, she surged back to win the Berlin WTA singles title a few weeks later.

Her appearance in the Wimbledon semis — against close friend and ‘barbecue buddy’ Tatjana Maria — comes just two weeks after she was forced to withdraw from the Eastbourne tournament, where she was partnering Serena Williams in the doubles, with a knee injury.

She moved to the capital, Tunis, at the age of 12 to train at a highly rated state-backed sports club.

She has been married to her physical trainer, and former fencer, Karim Kamoun, since 2015.

The right-hander is known for her stamina and the variety of her play.

“She hates playing at one pace,” said Mlika. “She’s always trying to create a spectacle by switching up the game with shots that surprise her opponents, especially with drop shots.

Jabeur made a splash on the global scene in 2011, winning the girls’ singles at the French Open at the age of 16.

Unsurprisingly, as her fame has spiralled membership levels have skyrocketed at her home club, from 320 in 2018 to more than 700 today.

These were the details of the news Tunisian tennis star Ons Jabeur’s date with history for this day. We hope that we have succeeded by giving you the full details and information. To follow all our news, you can subscribe to the alerts system or to one of our different systems to provide you with all that is new.