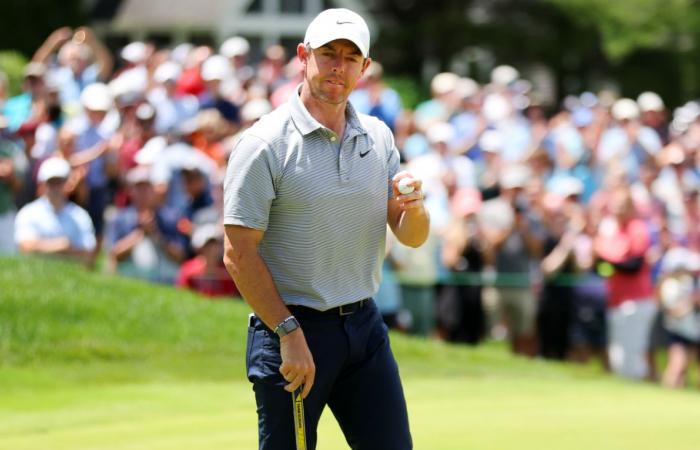 Thank you for reading the news about Rory McIlroy, JT Poston share Travelers lead at 8-under 62 and now with the details

Jeddah - Yasmine El Tohamy - CROMWELL, Connecticut: Rory McIlroy fought off a sinus bug to shoot an 8-under 62 on Thursday for a share of the first-round lead with J.T. Poston in the Travelers Championship.

Coming off a fifth-place tie Sunday in the US Open after winning the Canadian Open the previous week, the second-ranked McIlroy had a bogey-free morning round — highlighted by a 47-foot birdie putt on the par-4 seventh.

McIlroy matched the lowest opening round of his PGA Tour career. He finished with a tap-in birdie on the ninth hole after a 332-yard drive and 44-foot chip just past the pin.

“It’s like US Open rehab coming here,” the four-time major champion said. “I like coming here the week after the US Open, it sort of gives you an opportunity to shoot low scores and get after it.”

Poston had five straight birdies on Nos. 13-17 and made the turn at 6-under 29, giving rise to thoughts of Jim Furyk’s record 58 on the same TPC River Highlands course in 2016. Poston parred the first six holes on front nine and birdied Nos. 7 and 9 to cap a bogey-free round.

“I gave myself a few looks, but kind of made a bunch of pars to start the front, so that was kind of out of the picture after a little while,” said Poston, the 2019 Wyndham Championship winner. “I might have thought about it a little more if I had made a couple of early birdies.”

Xander Schauffele and Martin Laird were a stroke back.

Schauffele hit all 18 greens in regulation for the first time in his career, despite showing up late at the practice range because he thought his 7:35 a.m. tee time was at 7:50.

“That was a pretty big rookie move on my behalf,” the Olympic champion said. “But when I’m at home, I’ll show up for an 8 o’clock tee time at 7:55, maybe hit two putts and then start swinging. So, take advantage of the youth, I guess.”

Patrick Cantlay, Charles Howell III and Webb Simpson, who played alongside McIlroy, were two shots back at 64.

“We kind of fed off each other,” Simpson said about McIlroy. “The holes started looking bigger and bigger. A lot of putts were made.”

Rain on Wednesday left the greens soft in the morning. They hardened later in the day and the wind picked up after lunch, leading to some higher scores.

“I thought the conditions in the afternoon were a lot tougher,” Cantlay said. “It was blowing as soon as I got on the first tee. Watching a little bit of the coverage this morning, I knew it was much different this afternoon than the low scores those guys put up this morning.”

Harris English, who won last year on the eighth hole of a playoff, opened with a 66. Top-ranked Mastes champion Scottie Scheffler had a 68.

Jordan Spieth, who holed a shot out of a greenside bunker on 18 to win here in 2018, had one of the tougher afternoons. He made a double bogey on 12, hitting his tee shot out-of-bounds near the Connecticut River. The three-time major winner sat cross-legged in the fairway as he attempted to regroup and then birdied two of his next three holes. But his tee shot at 16 found the water and he finished with a 75.

There were no withdrawals Thursday after several earlier in the week. Those include Justin Thomas, who bowed out Wednesday to rest an ailing back, and Brooks Koepka, who this week became the latest player to join the LIV Golf series.

McIlroy said he’s not feeling any pressure this week to be an ambassador for the PGA Tour.

“I’m in a good run of form. I’m playing well,” McIlroy said. “Whether that gives me a little more confidence to speak up on certain issues, maybe. But, I’m just going out there and trying to play my game and try to win some more tournaments.”

These were the details of the news Rory McIlroy, JT Poston share Travelers lead at 8-under 62 for this day. We hope that we have succeeded by giving you the full details and information. To follow all our news, you can subscribe to the alerts system or to one of our different systems to provide you with all that is new.