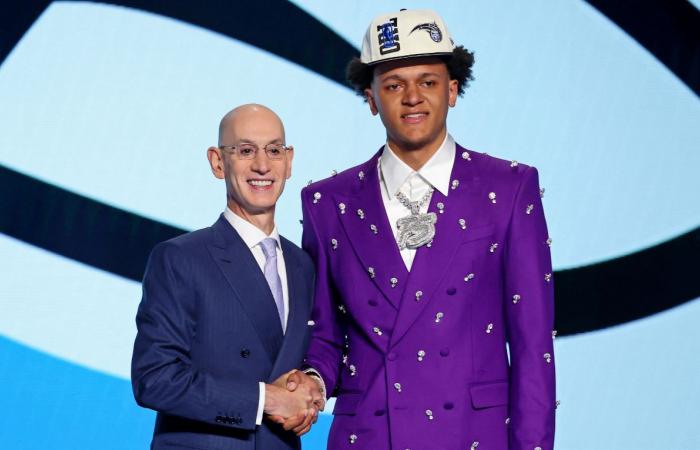 Thank you for reading the news about Magic take Banchero 1st, Holmgren, Smith follow in NBA draft and now with the details

Jeddah - Yasmine El Tohamy - EASTBOURNE, England: Beatriz Haddad Maia was given a helping hand in her bid for a third straight grass-court title ahead of Wimbledon.

The Brazilian advanced to the semifinals at Eastbourne without hitting a ball Thursday after her opponent, Lesia Tsurenko, withdrew because of a right elbow injury.

Hadded Maia will be fresh when facing Petra Kvitova in the last four on Friday as she looks to follow up title wins in Nottingham and Birmingham over the past two weeks. She hadn’t won a WTA title before this short grass-court season that is going better than she could ever have imagined.

Kvitova, a two-time Wimbledon champion, ended the hopes of British wild card Harriet Dart in a 6-3, 6-4 victory on center court.

The other semifinal match will be between defending champion Jelena Ostapenko and 12th-seeded Camila Giorgi, who also had straight-set wins.

In the men’s event, British wild card Jack Draper reached his first ATP semifinals by beating compatriot Ryan Peniston 6-3, 6-3. Maxime Cressy of the United States ensured there would not be another all-British match in the semis but ousting home hope Cameron Norrie, the top-seeded player, 7-5, 7-5.

That left third-seeded Taylor Fritz as the highest-ranked player left in the draw and he became the second American to advance from the quarterfinals by beating Alexander Bublik 6-3, 6-2.

Much of the scrutiny at Eastbourne this week has been on the women’s doubles, in which Serena Williams was competing in her comeback from a year away from tennis.

However, Williams and Ons Jabeur withdrew from the tournament on Thursday because of a right knee injury sustained by Jabeur, the WTA said. They were scheduled to play Magda Linette and Aleksandra Krunic in the semifinals after winning two matches on the south coast of England.

BAD HOMBURG, Germany: Bianca Andreescu reached her first semifinal in over a year, and first on grass, with a 6-4, 6-1 win over top-seeded Daria Kasatkina at the Bad Homburg Open on Thursday.

The former US Open winner broke Kasatkina’s serve five times in a dominant showing. It’s the closest that Andreescu has come to a title since she took time off to recharge and work on her mental health, missing the Australian Open before returning to the tour in April.

The Canadian’s last title win was her breakout US Open victory in 2019, and her last final was in Miami in April 2021. During that time, Andreescu has developed her interests away from the court, making music and writing a children’s book inspired by her childhood on the tennis court.

The 22-year-old Andreescu will play Simona Halep, whose quick-fire 6-2, 6-1 win over Amanda Anisimova puts her in back-to-back semifinals after reaching the last four in Birmingham last week.

Cornet’s semifinal opponent is Caroline Garcia after the French player beat Sabine Lisicki 6-3, 7-6 (7). Lisicki was in her first tour-level quarterfinal match since 2018 after years of struggling with knee injuries.

These were the details of the news Magic take Banchero 1st, Holmgren, Smith follow in NBA draft for this day. We hope that we have succeeded by giving you the full details and information. To follow all our news, you can subscribe to the alerts system or to one of our different systems to provide you with all that is new.