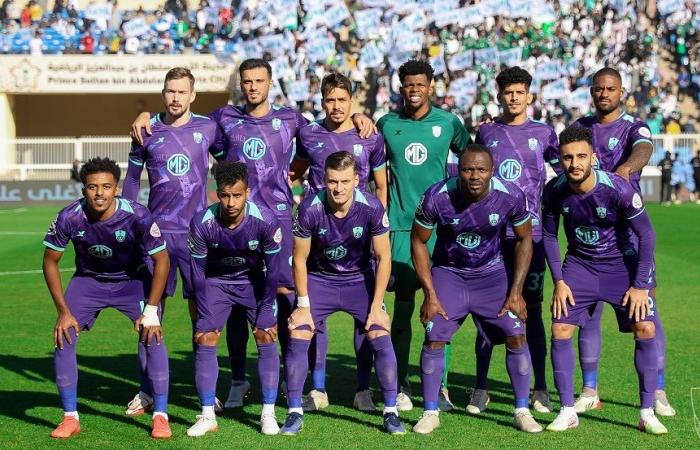 Al-Ahly Jeddah club survived a defeat against its host Damak (1-1) in the match that brought them together, today, Friday, in the 18th round of the Prince Mohammed bin Salman Professional Football League.

The hosts advanced with a quick goal scored by Algerian striker, Elaraby Hilal Soudani, in the fourth minute of the start of the whistle.

The Syrian striker, Omar Al-Soma, responded with a equalizer for Al-Ahly, scored from a penalty kick, in the 40th minute of the first half of the meeting, which took place at Prince Sultan bin Abdulaziz Sports City Stadium (Al-Mahalla) in the city of Abha.

Al-Ahly, after this tie, raised its score to 20 points, and was alone in the ninth place, so far, waiting for the rest of the matches of this round.

On the other hand, Damak raised his score to 30 points, and occupies fifth place on the league standings.

These were the details of the news Watch .. Omar Al-Soma saves Al-Ahly from defeat for this day. We hope that we have succeeded by giving you the full details and information. To follow all our news, you can subscribe to the alerts system or to one of our different systems to provide you with all that is new.