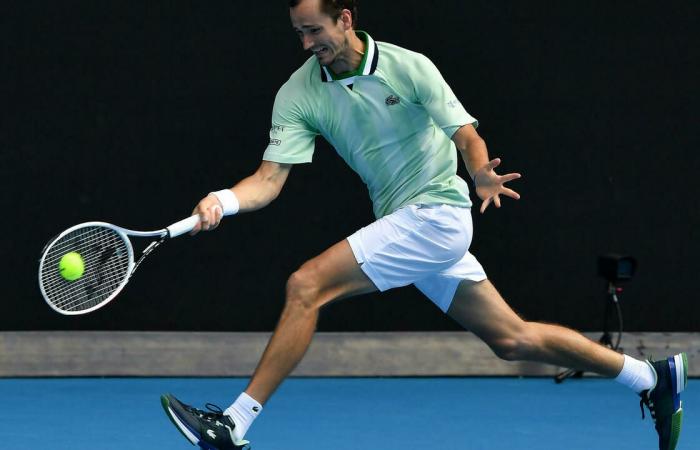 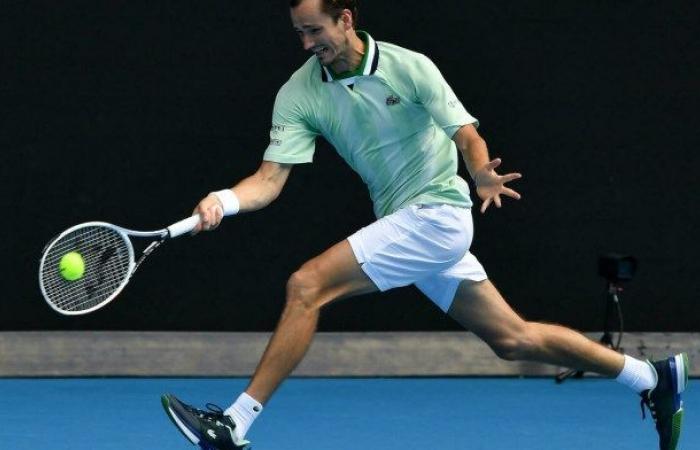 “I tried to win that third set but I said I’d wait (the tiebreak), and I did, so I’m really happy,” said Medvedev, who denied Novak Djokovic a grand slam title last year when he beat him in the final for Flushing Meadows.

“I started well in Australia last year, won the AFL Cup and got to the final here. I love playing here, I love hard courts and I want to do better than I did last year.”

Medvedev is seeking to compensate for his loss in the final last year when he fell to Djokovic, who is the most prominent candidate to crown the title after the Serbian was deported because he did not receive the anti-Coronavirus vaccine, which destroyed his dreams of winning the record twenty-first title in the Grand Slam.

Medvedev played down the importance of talking about his candidacy for the title in the absence of Djokovic, and said, “Melbourne, Rod Laver Arena, is definitely his (Djokovic) favorite in the world, because of the number of final matches he has won here, they are impressive.”

“But that can’t change my style, because there are still six tough matches to win the title. It was the same at the US Open. I had six tough matches against strong opponents to get to the final and then I had to beat Novak. He was hoping for Achieving something special (Grand Slam in one year).”

“I played well. My serve was strong. I managed to win the match. It’s the same here, no matter how I play here, how far I’ll go, if I reach the final, against who I’m going to play, it won’t be easy and you have to show your best.” To win a major championship.

The other Russian Andrey Rublev, the fifth, did not find it difficult to qualify for the second round, by defeating Italian Gianluca Mager 6-3, 6-2, 6-2.

The Norwegian Kasper Ruud, the eighth, withdrew due to an ankle injury he suffered two days ago in training.

“I was hoping to be able to recover, but the injury to my ankle may need more time,” said Rudd, who won five titles last season and is the first Norwegian to win a title in the ATP tournament.

“I was hoping to try to do the same this year, maybe one more step forward,” added Rudd, who reached the fourth round in Australia last year. “This year’s Grand Slams will be a big goal for me because last year, apart from the Australian Open, I felt like I didn’t. As I would have liked in the major tournaments.”

And it was Murray’s first match in the Australian Championships since 2019, when he came out of the first round and bid farewell to the competitions in tears, as it was believed that it was his last appearance on the yellow ball due to his suffering from recurring pain in the hip that forced him to undergo two surgeries that kept him out of action for a long time.

After qualifying, Murray said: “A great win, it’s been a tough three or four years. It’s been a lot of work to come back here. I’ve played on this court many times and the atmosphere is great.”

“It’s great to come back and win a five-set fight like that, I couldn’t ask for more.”

It is Murray’s second victory over Basilashvili in a week, after she narrowly beat him 6-7 (4-7), 7-6 (7-3) and 6-3 last Wednesday in the quarter-finals of the Sydney Games on his way to his first final since October October 2019 when he lost to Russia’s Aslan Karatsev.

The Briton also won in four sets in the first round of Wimbledon last year.

Among the women, Egyptian Mayar Sherif came out of the first round, losing to Britain’s Heather Watson 3-6, 7-5, 2-6.

Sherif was the only Arab tennis representative in the tournament, after Tunisian Anas Jaber withdrew due to injury.

The American Laila Fernandez, runner-up to Flushing Meadows last summer, was no better than Mayar and was farewelled in the first round by losing to Australian Madison Inglis, participating by invitation, 4-6, 2-6.

Spain’s Garbine Mugurosa, the third in the world, succeeded in reaching the second round of the Australian Championships for the tenth time in his 10 participations, by defeating French Clara Borrell 6-3, 6-4.

“The competition is very open in the first rounds where any player can beat the other regardless of the classification, so I am happy that I finished the second set at 6-4,” Mugurusa said.

Mugurosa, who won the 2016 Roland Garros and 2017 Wimbledon titles, will meet in the next round with another Frenchwoman, Alize Cornet, who defeated Bulgarian Victoria Tomova 6-3, 6-3.

“I found it very difficult today, and I wasn’t sure if I could play well. But in the end I won and that makes me very happy. I hope this week I can play better and better,” said Halep, who recently returned from injury and is looking for a third big title. .

These were the details of the news A good start for Medvedev and Mogorusa, a difficult start for... for this day. We hope that we have succeeded by giving you the full details and information. To follow all our news, you can subscribe to the alerts system or to one of our different systems to provide you with all that is new.