The story of the seven friends… Struggle, steadfastness, and buying a... 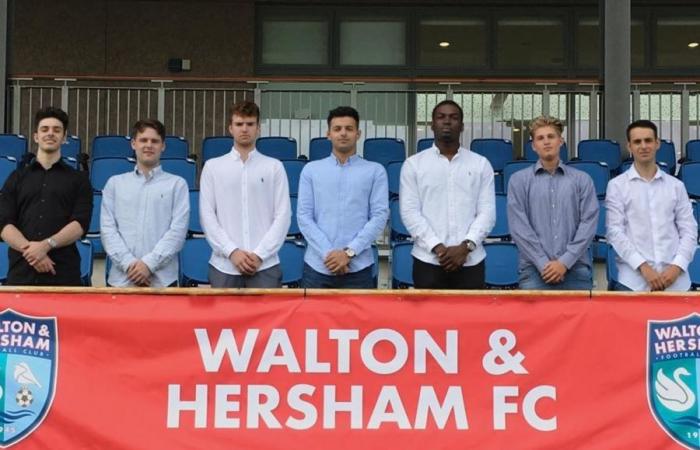 7 young people united in Britain and decided to buy a football club, and indeed they succeeded, and they now have ambitious plans to advance the club.

And “Sky News” in Britain, on Sunday, shed light on the seven young men who were 19 years old in 2019, when they bought the Walton and Hirsham club in Surrey, southern Britain.

These young men became the youngest owners of football clubs in Britain.

The semi-professional Walton and Hirsham Club was founded in 1945 and was bought by the seven young men for a small fee.

Last November, the Walton and Hersham team traveled to Springfield in the neighboring county of Jersey, to face the Jersey Bulls, who have not lost a point on the ground in 25 games.

The match seemed to end with a comfortable result for the hosts, as they were ahead by 4-1, but the visiting team scored 3 goals after the 85th minute, and this helped them achieve one point and avoid losing.

The team’s performance in the last minutes of the match showed to both Jack Newton and Sartig Tucker, aged 22, that the effort they made with their colleagues had paid off.

The two were part of seven youngsters who bought the club for a small fee in August 2019.

Since its founding 77 years ago, the club has played a role in society and football.

The club was an essential part of the lower levels of the football pyramid in Britain, when it was owned by the late British star Stanley Matthews in the seventies, and in 1973 the team won the FA Cup for amateurs.

But the club has been in constant decline over the years, with poor results and the stadium being sold, while the club’s former owner, Ayn Smith, is looking for a way out of the club.

With the team in crisis, the seven friends decided to step in, although some of them are still studying at university and others work full time.

“It’s scary to run a football club, but if you had that opportunity, you wouldn’t think twice,” said Tucker, who is in charge of operations at the club.

And the seven worked on using social networks to attract the public and replaced the coach.

Earlier in 2021, the team succeeded in reaching the Premier League in the southern region, and is included in the fifth division in Britain.

Now the team is ranked first in this league.

The team hopes to ascend another level in the English football pyramid this season, but the young owners do not want to stop there but insist on continuing the upward path.

These were the details of the news The story of the seven friends… Struggle, steadfastness, and buying a... for this day. We hope that we have succeeded by giving you the full details and information. To follow all our news, you can subscribe to the alerts system or to one of our different systems to provide you with all that is new.