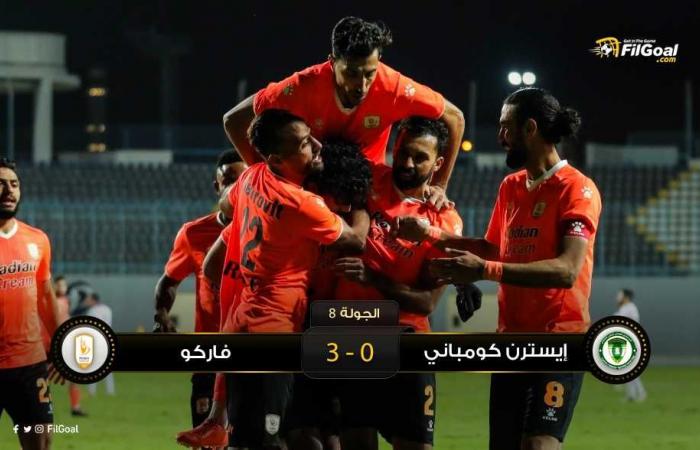 In the meeting of the two newcomers to the Egyptian League, Farco scored the fourth victory, and the Eastern Company received the eighth defeat.

Farco beat the Eastern Company, 3-0, at Petrosport Stadium, in the eighth round of the Egyptian League.

The win raised Farcos balance to 12 points in fifth place, while Eastern Company’s balance froze at none of the points in the last place after 8 defeats from 8 matches.

The match was almost spoiled by arbitration decisions, but video technology saved the situation.

Farko was dominant since the start of the match, in front of a brilliance from Eastern Company goalkeeper Ahmed Boska.

Talliya in the 15th minute passed by everyone, and Bosca saved her at the last minute.

Bosca shined again in the 39th minute. Touliya reached Ahmed Sharif, who was alone, and Bosca confronted her, and was injured and fell to the ground. The ball reached Sharif, who shot in the defense and rebounded to Mahmoud Hamada outside the penalty area and in light of Boskas fall, but he shot next to the post.

Walid Ali received a cross in the 44th minute, turned around and shot next to the post.

The beginning of the arbitration controversy

In the second minute of lost time, Mahmoud Nassef, the referee of the match, awarded Farko a penalty kick in the 47th minute after Ahmed Sharif fell inside the penalty area.

Nassef returned to the video technology, and decided to cancel the penalty kick, so that the first half ended in a goalless draw.

Rizki Hamrouni participated at the beginning of the second half, instead of Hisham Fathallah, in the formation of FARCO.

As the first half ended, the second started with refereeing excitement. Mahmoud Nassef awarded the Eastern Company a new penalty kick in the 48th minute after Mohamed Sobhi blocked Mohamed Essam.

The referee returned to the video technology, and then decided to cancel the penalty kick again, to continue the tie.

In the 58th minute, Farko finally scored the first goal. A cross was met by Ahmed Sharif with a touch in the goal, recording the first.

Amr Gomaa, the assistant referee, canceled the goal for offside, but by returning to the video technology, the goal was shown to be correct, and it was already calculated.

Alaa Abdel-Al responded with three substitutions for the Eastern Company in the 68th minute with the entry of Salah Ashour, Ahmed Temsah, and Amr Hosam instead of Mohamed Hassan, Arafa El-Sayed, and Kamal Aboul Fotouh.

Farco ended the match with a second goal in the 77th minute, thanks to the substitutes. A cross from Ahmed Al-Saghiri received it by Ali Bahij, then he shot into the goal, scoring the second.

Salah Ashour tried to return to the Eastern Company with a wonderful shot in the 79th minute, and I found a wonderful save from Sobhi to a corner.

Here, Islam Gamal participated in the place of Ahmed Sherif in the 80th minute.

And the alternative, Islam Jamal, wanted to have his role as well, so he scored the third goal in the 90th minute. A start, he passed through the defense and hit his left shot against Bosca, ending the match with Farco winning by three.

The win raised Farcos balance to 12 points in fifth place, while Eastern Company’s balance froze at none of the points in the last place after 8 defeats from 8 matches.

These were the details of the news FilGoal | News | A match saved by VAR..... for this day. We hope that we have succeeded by giving you the full details and information. To follow all our news, you can subscribe to the alerts system or to one of our different systems to provide you with all that is new.