In light of Barcelona’s interest… an official statement determines the future... 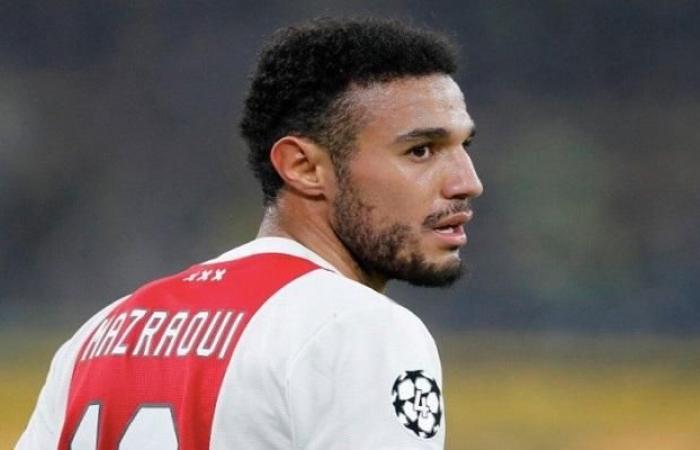 It seems that the future of Moroccan Nassir Mazraoui, the back of Ajax Amsterdam, has been decided once and for all during the coming period.

Mazraoui’s name has recently been linked to a move to Barcelona, ​​whether during the next summer Mercato or faster in January, especially since his contract with Ajax expires in June.

Edwin van der Sar, the Dutch goalkeeper legend and the current CEO of Ajax, hinted widely that Mazraoui’s days at the Dutch club are numbered.

“Several months were wasted in fruitless negotiations between us and Mazraoui,” Van der Sar said in comments reported by Sky Sport Italia.

He added: “We really want him to stay, but now it’s mid-December, and then everyone knows where things will go. We wish the best for us and the player.”

According to Fabrizio Romano, the famous Italian journalist who specializes in transfers, Barcelona has already contacted Mino Raiola, Mazraoui’s agent, to discuss his free inclusion next summer, knowing that Barca is among 3 other clubs seeking to sign the promising Moroccan player.

And the Spanish newspaper “AS” revealed that Mazraoui may move to Barca faster, during the winter Mercato next January, instead of waiting until the summer, when the player’s contract with Ajax ends, through a reciprocal deal in which he restores the American Sergino Dest, who left the Dutch club towards Barcelona in Mercato 2020.

The first team of Barcelona currently includes another Moroccan player, Abdel Samad Zalzouli, who participated with the team in 7 matches this season, in which he scored one goal against Osasuna.

It is noteworthy that Mazraoui participated in 113 matches with Ajax Amsterdam since 2018 until now, in which he scored 9 goals and crowned with him two Dutch league titles, the same for the Dutch Cup and the Johan Cruyff Cup title.

These were the details of the news In light of Barcelona’s interest… an official statement determines the future... for this day. We hope that we have succeeded by giving you the full details and information. To follow all our news, you can subscribe to the alerts system or to one of our different systems to provide you with all that is new.