Summary and goals of the Liverpool match against Leicester City 3-3... 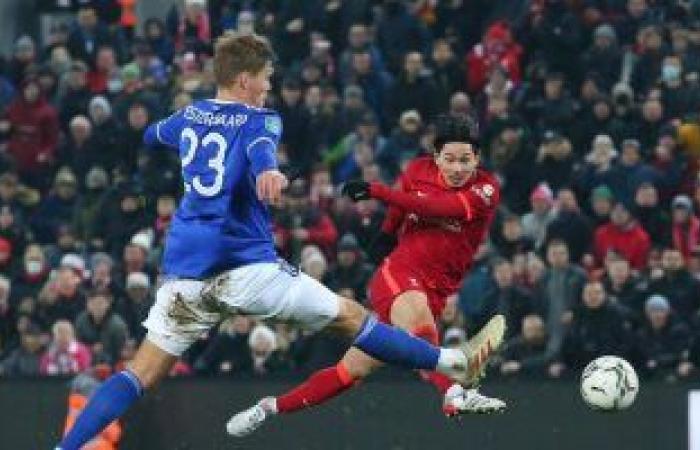 The Liverpool team qualified for the semi-finals of the English League Cup, after beating Leicester City 5-4 on penalties, after a 3-3 draw, in the match that our Egyptian star Mohamed Salah missed, the Reds wing, which brought them together on Wednesday evening at Anfield Stadium, the home of the Reds, in the quarter-finals of the tournament.

The goals of the first half were scored by Jimmy Vardy (two goals) in the 9th and 13th minutes, and James Madison in the 33rd minute, while the Reds’ only goal was scored by Alex Chamberlain in the 19th minute, to end the first half 3-1 in favor of the Foxes.

In the second half, Portuguese substitute Diogo Jota reduced the difference in favor of the Reds, but the Japanese Minamino scored a fatal goal in the 96th minute to lead the match to penalty shootouts after a 3-3 draw.

In the penalty shootout, Liverpool won 5-4 to qualify for the semi-finals of the tournament, and Leicester City was eliminated from the tournament.

Liverpool had booked its place in the Carabao Cup quarter-finals after beating its host Preston North End, with two goals, in the match that brought the two teams together at the Debdale Stadium, in the round of 16 competitions of the competition.

On the other hand, Leicester City qualified for the quarter-finals of the English League Cup at the expense of its rival Brighton on penalties 4-2 after the match ended in a draw with two goals each.

Liverpool is second in the English Premier League standings with 41 points, 3 points behind Manchester City, the leader with 44, while Leicester City is ninth with 22 points.

These were the details of the news Summary and goals of the Liverpool match against Leicester City 3-3... for this day. We hope that we have succeeded by giving you the full details and information. To follow all our news, you can subscribe to the alerts system or to one of our different systems to provide you with all that is new.