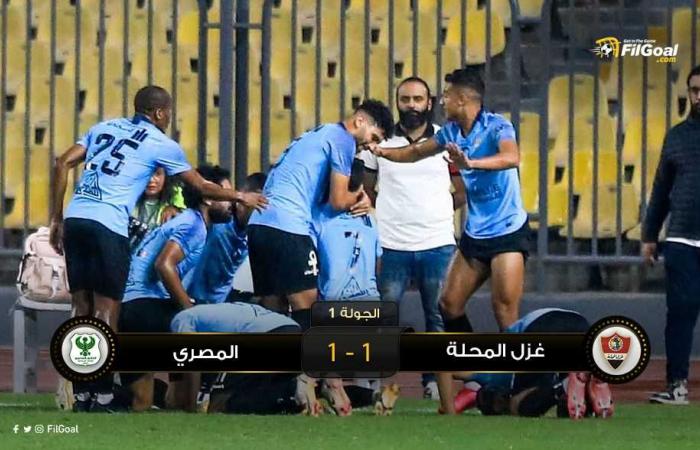 The tie was settled 1-1 against Ghazl El-Mahalla and Al-Masry at the end of the first round of the Egyptian League matches at Borg El Arab Stadium.

Ghazl Al-Mahalla was unable to win against Al-Masry, as it remains the last victory of the peasant leader in September 2007.

Since then, Al-Masry has dominated the confrontations during the last 11 matches, achieving 10 wins and one draw.

Al-Masry had defeated Ghazl El-Mahalla in the last edition of the league.

Ghazl El-Mahalla has been for the fifteenth match without a win in the Egyptian League since last season, while Al-Masry has not won in the last 5 matches in the league as well.

Each team scored a point at the beginning of its journey in the Egyptian League 2021-2022.

Mohamed Odeh, the technical director of Ghazl El-Mahalla, relied on Abdo Yahya as a fake striker, and his successors were Hisham Adel and Ibrahima Kone.

While the Palestinian Muhammad Balah led the attack of Al-Masry, and behind him were Mustafa Sultan, Ahmed Al-Sheikh and Islam Attia.

50 seconds and Abdo Yahya threatened Al-Masry’s goalkeeper with a powerful shot from the right side from inside the penalty area that passed next to the post.

The floundering of the Egyptian defense continued in the first minutes of the match.

Longitudinal ball from goalkeeper Mahmoud Reda, Abdo Yahya paved the ball to Hisham Adel to make him face Ahmed Masoud’s goal, shooting to the right of the goalkeeper in the ninth minute.

Al-Masry began his attacking attempts with a header from Islam Gamal, after a free kick by Farid Shawqi, which reached easily in the hands of Reda.

In the 22nd minute, Al-Masry players demanded a penalty kick, but Mahmoud Bassiouni, the match referee, refused to award it.

The events of the match calmed down a little between the two teams without danger, while the spinning relied on long balls, which almost misled the Al-Portsaidi team’s defense, but Ahmed Masoud was vigilant.

The duo, 4 minutes after the start of the match, secured the equalizer.

Al-Jallasi sent a cross from a fixed ball and with a strong header in the close corner, Mohamed Antar scored the equalizing goal for Al-Masry.

Al-Masry in the following minutes sought to snatch the victory.

A cross from Ahmed Shedid Kenawy was met by Mustafa Sultan with a shot at the bird that passed near the post in the 57th minute.

The last half hour did not witness any attempts by both teams to share the match point.

These were the details of the news FilGoal | News | The benches reinforce Al-Masry’s superiority... for this day. We hope that we have succeeded by giving you the full details and information. To follow all our news, you can subscribe to the alerts system or to one of our different systems to provide you with all that is new.