Barcelona dismisses Koeman, so will the “Maestro” Xavi be his successor? 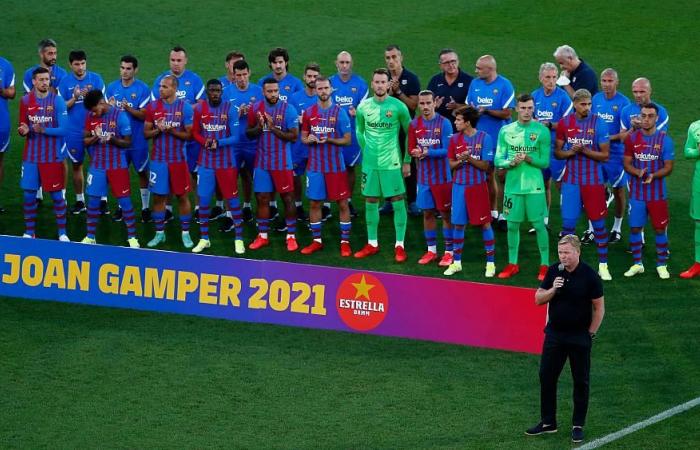 Barcelona, ​​the 26-time Spanish champion and five-time European champion, sacked its Dutch coach Ronald Koeman late Wednesday, 14 months after his appointment, after a new loss in the local football league against Rayo Vallecano, while the fortunes of his former midfielder appeared. And current Qatari Al Sadd coach Xavi Hernandez is elevated to succeed him.

And by losing at Rayo Vallecano 0-1, Barcelona has suffered a third loss in ten matches, to occupy a disappointing ninth place in the La Liga standings. The club announced in an official statement: “Barcelona has relieved Ronald Koeman of his duties as first-team coach. Club president Joan Laporta informed him of the decision after the loss to Rayo Vallecano.”

The statement continued: “Ronald Koeman will bid farewell to the team on Thursday at Ciutat Esportiva. FC Barcelona would like to thank him for his service to the club and wish him success in his professional career.”

loss on the ground

Barcelona played the Faikano match with low spirits after losing the El Clasico at home to its historical rivals Real Madrid (1-2) for the second time in a row, and striker Memphis Depay missed the opportunity to equalize against Vaikano by missing a penalty kick in the 72nd minute.

Barcelona looks like a ghost to the team he led Argentine legend Lionel Messi For nearly two decades, before his departure last summer to Paris Saint-Germain, France, his decline began in recent years, even in the presence of Messi, after discrepancies that amounted to scandals with the previous administration led by former President Josep Maria Bartomeu.

The Catalan team, which suffers from financial problems, lost deadly offensive weapons like Messi, veteran Uruguayan Luis Soares, French Antoine Griezmann, and before them Brazilian Neymar, who moved to Saint-Germain, in a deal that was the most expensive in history (222 million euros). Koeman, 58, said after the loss: “Not scoring goals is a problem, there are players who can score goals.”

Koeman talked about the veteran Argentine Sergio Aguero, who came from Manchester City, to originally play alongside his compatriot Messi before the shocking departure of the latter, and said: “Aguero was always a top scorer, Memphis scored 15-20 goals every season for years. It could be the midfield. We have a drop but I can’t blame the team. “We struggled to get into the game. The result is not fair, but it is the same and we can’t change it.”

Barcelona’s poor start may affect the possibility of it being among the top four, and thus not qualifying for the Champions League next season, which could create painful financial repercussions for the already exhausted club in this regard.

If the administration resorts to appointing Xavi, this decision will receive a positive reaction from the fans, given the technical and moral value he carries since he was an outstanding midfielder in the team, and led him with his colleague Andres Iniesta to several local and continental titles.

The club’s fans also dream of restoring the team’s offensive playing style, which Xavi tested as a player under the supervision of the feat coach Pep Guardiola, who is currently supervising Manchester City.

Last Friday, Xavi, 41, won a new title with Al-Sadd, winning the Emir of Qatar Cup final against Al-Rayyan on penalties. On the eve of the match, he said: “When Barcelona called me three months after I came to Al-Sadd, I was not ready. Now the situation is different, but I am happy to stay with Al-Sadd.”

Among the names presented in the media are Argentine Marcelo Gallardo, coach of River Plate, and Dutch coach Erik Ten Hag, coach of Ajax Amsterdam. But in the event that one of the big names hesitates to accept the task mid-season, the club’s son, Sergey Barguan, the former international left-back in the team during the nineties, may be temporarily resorted to. The team is waiting for easy matches before the next international window, against Alaves, Dinamo Kyiv of Ukraine in the Champions League, and Celta Vigo.

Before coming to Barcelona, ​​Ashraf come onHe scored the winning goal for Barcelona in his first Champions League final in 1992, against Vitesse, Ajax, Benfica, Eindhoven, Valencia, Spain, Alkmaar, Feyenoord, Southampton and Everton, in addition to the Dutch national team.

The former owner of the missile shot was appointed in August 2020 during the era of Bartomeu, and achieved relative success in his first season, winning the King’s Cup, and returning Messi to the team’s track after sharp differences with the management.

But the disappointment of the local league and a loss against Paris Saint-Germain in the round of 16 of the Champions League cast a shadow over the possibility of facing the prominent clubs on the continent, and Real’s recent loss was the straw that broke the camel’s back.

Laporta was re-elected last March, and while he supported him more than once despite the poor results, the loss of confidence was clear between the two men, and Koeman said about him: “He talks a lot,” and on Wednesday expressed his dismay at the lack of support for the team as it should, as the clubs strengthened their ranks in recent years. Unlike Barcelona, ​​he said.

The club is under a debt of 1.35 billion euros, and lost its most prominent marketing value represented by Messi, the best player in the world six times. Young faces benefited from the changing situation in Barcelona, ​​such as Pedri, Gavi, Nico Gonzalez, the American Serginho Dest and Uruguayan Ronald Araujo, but the team’s pillars faced disappointment after disappointment.

In the end, the results played a decisive role, especially in light of Barcelona’s disastrous start in the Champions League, losing 3-0 to Bayern Munich and Benfica, before narrowly beating Dynamo Kiev 1-0.

These were the details of the news Barcelona dismisses Koeman, so will the “Maestro” Xavi be his successor? for this day. We hope that we have succeeded by giving you the full details and information. To follow all our news, you can subscribe to the alerts system or to one of our different systems to provide you with all that is new.