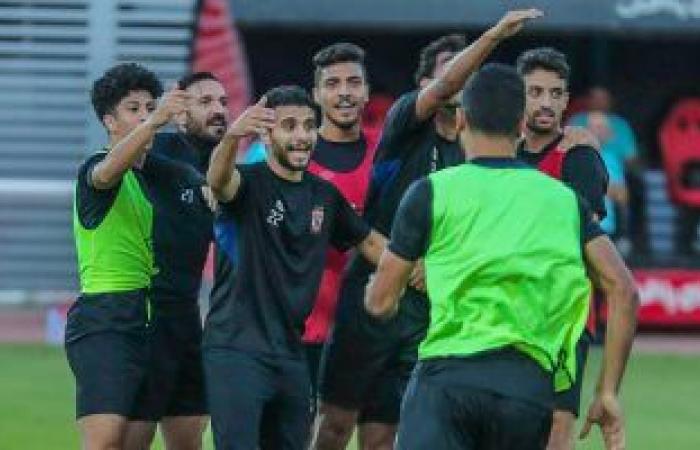 Pitso Mosimane, coach of the first football team at Al-Ahly Club, was keen to meet with the players before the start of the training, which was held this Thursday morning at the Titch Stadium; In preparation for facing Al-Ahly Bank, which is scheduled to be held next Sunday, in the second round of the Premier League.

The technical director also held a session with his assistant staff on the sidelines of the training session; To prepare for the Al-Ahly Bank match, and to know all the technical aspects of the meeting, in the team’s confrontations in the league championship.

Al-Ahly had defeated Al-Ismaili with four goals without a response in the match that was held yesterday evening at the Borg Al-Arab Stadium in Alexandria, in its first confrontation in the Premier League.

Al-Ahly performed its training this morning without rest, in preparation for the Al-Ahly Bank match, and the technical staff was keen to prepare all the players.

He added that Al-Ahly faces great challenges during the coming period, and the technical staff seeks to continue to provide the same level during the upcoming matches.

Ali Maaloul, Al-Ahly’s first-team football player, undertook individual training on the sidelines of the team’s training session, which was held this morning, Thursday, at Al-Teach Stadium on the island, in preparation for the Al-Ahly Bank match in the team’s second round of the Premier League.

Maaloul ran around the stadium and performed some recovery paragraphs individually; To get rid of muscle stress, as part of the program that the technical staff implements to reduce the physical load on some players.

Al-Ahly performed its training this morning at the Touch Stadium, and it included hospital exercises for the group of players who participated yesterday in the Ismaili match, while the rest of the players trained under the supervision of the technical staff.

Al-Ahly won a clean four against Al-Ismaili in the match that was held yesterday evening at the Burj Al Arab Stadium in the team’s first rounds of the Premier League, and is preparing for the Al-Ahly Bank team match in the second round of the league championship to be held next Sunday evening.

These were the details of the news Al-Ahly’s training… Solo training for Maaloul… and Musimani lecturing the players for this day. We hope that we have succeeded by giving you the full details and information. To follow all our news, you can subscribe to the alerts system or to one of our different systems to provide you with all that is new.