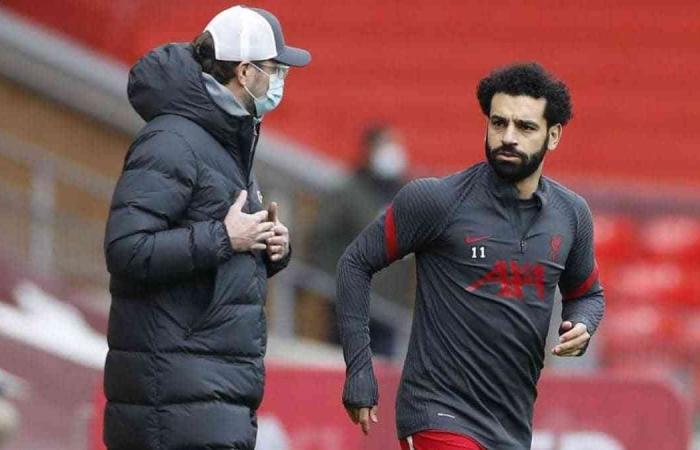 Media reports stated that the German coach, Jurgen Klopp, gave advice to the Egyptian star, Mohamed Salah, about his future if he decided to leave the “Reds”.

Salah’s contract with Liverpool expires in the summer of 2023.

With the renewal talks between the player and his current club suspended, many media reports talked about Salah’s possible destination in the event of his departure from Liverpool, which may be Real Madrid or Barcelona, ​​according to Russia today.

The Spanish newspaper, “El Nacional”, revealed in a report, that Klopp informed Salah his opinion about his next destination if he decided not to renew the “Reds”.

According to the source, Klopp advised his Egyptian player to move to Barcelona, ​​because he will be the first star of the team after the departure of Argentine Lionel Messi to Paris Saint-Germain, unlike the move to Real Madrid, where he will fight to snatch the spotlight from the French Karim Benzema, and perhaps also from his compatriot Kylian Mbappe, the candidate to join him. For the royal team next summer as well.

And there was news recently, of Salah’s desire to get 500,000 pounds per week, in order to renew his contract at “Anfield”, which Liverpool has not responded to so far.

Salah, 29, is providing the best start in his football career this season, as he has scored in the last 10 consecutive matches with his Liverpool team in all competitions, and is the top scorer in the English Premier League with 10 goals, after only 9 rounds have passed.

Last weekend, the Egyptian pharaoh achieved a historic achievement, by being alone in the ranking of the best African scorers in the history of the Premier League, after raising his score to 107 goals, ahead of Chelsea legend, retired Ivorian striker, Didier Drogba, who has 104 goals.

Salah is among the 30 players nominated by France Football magazine to win the Ballon d’Or this year, knowing that the voting was closed last Sunday evening.

Salah, along with Argentine Lionel Messi, winner of the prestigious award six times, Poland’s Robert Lewandowski, and Italian Georgino, are among the most prominent candidates for winning the Ballon d’Or this year.

The identity of the winner of the Ballon d’Or will be revealed at a ceremony to be held in the French capital, Paris, on November 29.

These were the details of the news Klopp warns Salah against moving to Real Madrid for this day. We hope that we have succeeded by giving you the full details and information. To follow all our news, you can subscribe to the alerts system or to one of our different systems to provide you with all that is new.