Lloyd signs off with win as US thrash South Korea 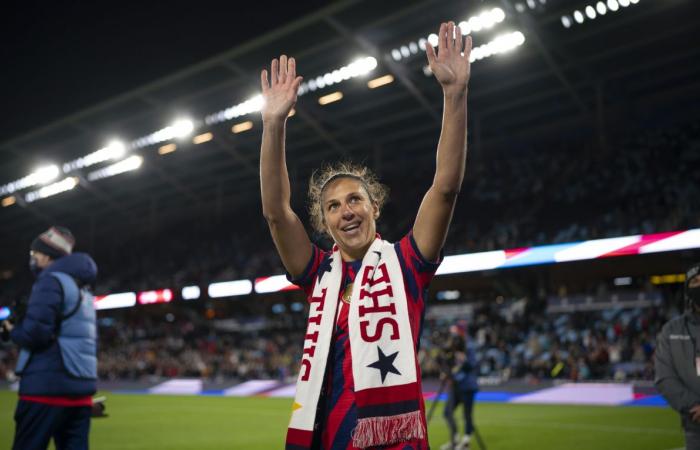 Jeddah - Yasmine El Tohamy - LOS ANGELES/MANCHESTER: Carli Lloyd bade an emotional farewell to international football on Tuesday as the US defeated South Korea 6-0 in a friendly.
The 39-year-old Lloyd’s farewell game — her 316th international for the US women’s team — was brought to an end on 65 minutes when she was substituted for Alex Morgan at Allianz Field in Saint Paul, Minnesota.
Lloyd, a member of two World Cup-winning US teams and a two-time Olympic gold medallist, hugged each of her teammates as she left the field waving to the crowd for the last time as a US international.
“It’s been a long career, and I don’t know that there’s really much that needs to be said,” Lloyd said in an address to the crowd afterwards.
“I want to thank all you fans, the doubters, the critics, everybody — you’ve pushed me to greater and greater heights throughout my career and I’m extremely thankful for that.
“Thirty-four years playing this beautiful game — It has been an honour. I have been absolutely grateful for every opportunity that I’ve stepped out on this field and I hope that you know I gave it everything I had for every single one of you.”
The veteran striker was unable to crown her final appearance with a 135th international goal, however, denied either side of half-time by South Korean goalkeeper Kim Jung-mi.
Lloyd’s first chance on goal came on 27 minutes, but her curling shot from just outside the area was foiled by the desperate dive from Kim, who parried the effort wide for a corner.
Lloyd also went close in the 54th minute, but her cleverly directed downward header from Mallory Pugh’s cross was once again saved by Kim.
Lloyd, who made her international debut in a game against Ukraine on July 10, 2005, is widely regarded as one of the greatest women’s players in the history of the game.
She is the first and only player to score a hat trick in a women’s World Cup final, rattling in three goals in the opening 16 minutes of the 2015 final where the USA defeated Japan 5-2.
A two-time FIFA Player of the Year, in 2015 and 2016, Lloyd also scored the winning goals in the finals of the 2008 Olympics, when the US beat Brazil 1-0 in extra-time, and the 2012 Olympics, where she scored twice in a 2-1 victory over Japan.
While Lloyd was unable to add to her goal tally on Tuesday, she at least bowed out with a win as the reigning world champions secured a comfortable victory.
Lindsay Horan’s deflected shot opened the scoring for the US before Cho So-hyun’s own goal made it 2-0 on the stroke of half-time.
Lloyd’s replacement Morgan bagged a third on 69 minutes, before fellow substitute Megan Rapinoe swept in a fourth in the 85th minute. Rose Lavelle and Lynn Williams scored twice in the closing minutes to complete the rout.

UEFA hopes for record-breaking women’s Euro 2022 after 12-month delay
A year later than planned, the countdown to the women’s European Championship begins on Thursday when the draw for Euro 2022 takes place in Manchester.
England will play host to the tournament from July 6-31, which hopes to smash attendance records for women’s football with Manchester United’s Old Trafford the setting for the opening game before a Wembley final.
The hosts are hoping home advantage will help them win a major women’s international tournament for the first time.
The Lionesses have fallen at the semi-final stage in each of the last two World Cups and Euro 2017.
England are guaranteed to kick the tournament off at Old Trafford with organisers hoping for an attendance that will break the 41,300 record for a women’s European Championship match.
Holders the Netherlands, France and Germany are the other top seeds and contenders for the tournament, along with Olympic silver medallists Sweden and a rapidly improving Spain side filled with Champions League winners who play their club football for Barcelona.
Austria, Belgium, Denmark, Finland, Iceland, Italy, Northern Ireland, Norway, Russia and Switzerland are the other qualifiers for a tournament UEFA hopes to be the biggest European women’s sports event ever in terms of attendance.
Premier League stadiums in Brentford, Brighton and Southampton will play host to games, along with more modest venues in Leigh, Manchester, Milton Keynes, Rotherham and Sheffield.
“This was coupled with the need to strike the right balance for the tournament. Setting an ambitious ticket target — with more than 700,000 tickets available for fans — whilst seeking to achieve full venues where possible,” said the English Football Association’s director of women’s football Sue Campbell.
“This is a balance we believe we have achieved in the selected venues and cities, with England’s Lionesses due to play all of their group stage games at Premier League grounds across the country.”
Women’s football was hit hard by the coronavirus pandemic at time when participation and popularity was growing rapidly after a successful 2019 World Cup in France.

These were the details of the news Lloyd signs off with win as US thrash South Korea for this day. We hope that we have succeeded by giving you the full details and information. To follow all our news, you can subscribe to the alerts system or to one of our different systems to provide you with all that is new.