Ramtha defeats the youth of Jordan and touches the Jordanian League... 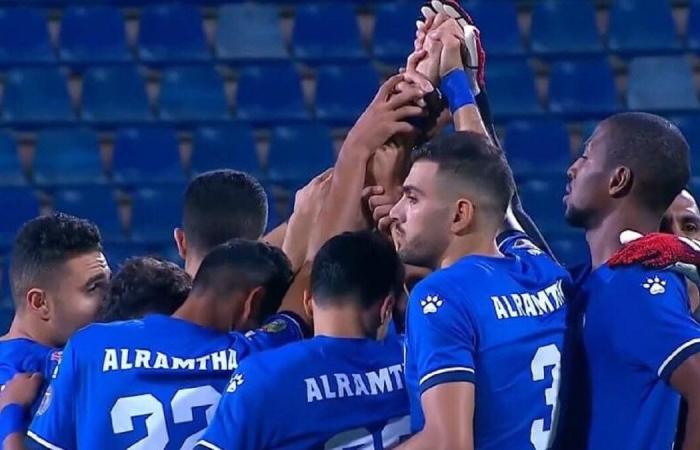 Ramtha is one point away from winning the Jordanian League title for the 2021/2022 season, after its 4/2 victory over Shabab Al-Urdun, today, Thursday, in the 21st round of the competition, at Amman International Stadium.

Hamza Al-Dardour, Musab Al-Lahham and Muhammad Abu Zreik “Sharara” scored from the penalty spot in the 20th, 23rd, 65th and 85th minutes, while Shabab Al-Jordan scored Douglas in the 43rd minute and Hamza Al-Naeem in the 45+2 minute.

Al-Ramtha raised its score to 46 points from 21 matches, compared to 30 points for Shabab Jordan in sixth place.

Al-Ramtha needs to collect one point in its last match in the league to secure the title for the third time in its history, regardless of the results of its chasing Al-Wehdat (the title holder), who has 41 points, from 20 matches and plays with Sahab at Prince Mohammed Stadium.

Al-Ramtha could be crowned with the title today, Thursday, if Al-Wehda stumbled in a tie or loss against Sahab.

Earlier, Ramtha announced the settlement of the financial situation with the International Football Association “FIFA” after 4 professionals filed an official case, demanding their dues that they did not receive when they represented the football team in the past years.

The official website of Ramtha confirmed that Raed Al-Nader paid about 122,000 dollars, which is the value of the dues of the four players, who are Ahmed Al-Douni, Jihad Al-Baour, Shadi Hamwi “Syria” and Iraqi Muhammad Shawkan. He pointed out that the required value was paid from Raed Al-Nader, provided that 122,000 dollars will be recorded as a financial liability to him in the club’s accounts.

Al-Ramtha has 14 wins, 4 draws and 3 losses in 21 matches in the Jordanian league this season.

Al-Faisaly is the club that has won the most Jordanian league title with 34 titles, knowing that it was founded in 1933, followed by Al-Wehdat and won the title 17 times, and was founded in 1956.

While Al-Ahly won the Jordanian League title 8 times, compared to 3 titles for Al-Jazeera, and two titles for Jordan Youth and Al-Ramtha.

These were the details of the news Ramtha defeats the youth of Jordan and touches the Jordanian League... for this day. We hope that we have succeeded by giving you the full details and information. To follow all our news, you can subscribe to the alerts system or to one of our different systems to provide you with all that is new.