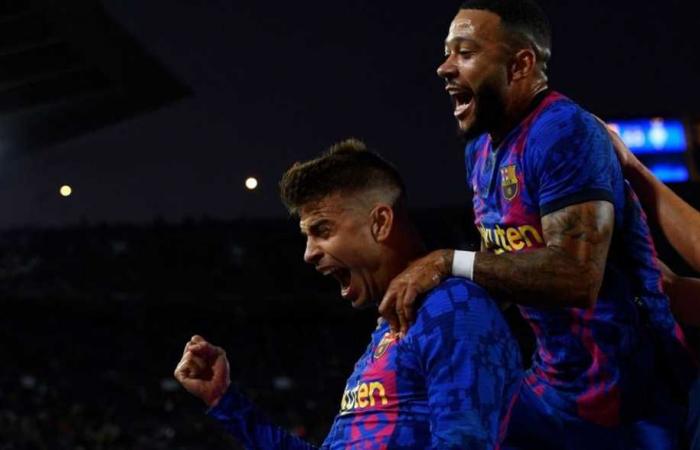 Barcelona opened its Champions League victories this season with a 1-0 win against Dynamo Kiev.

Barcelona hosted Dynamo Kiev in the third round of the Champions League group stage matches.

Pique scored Barcelonas only goal in the 36th minute, as the Catalans achieved the first three points in the group and climbed to third place before Bayern Munich faced Benfica.

Bayern Munich leads the group with six points from two matches, while Benfica is in second place with four points.

At the same time, Salzburg defeated Wolfsburg by three goals to one in Group G matches.

Salzburg continued to maintain its lead in the group with 7 points, while Wolfsburg’s balance froze at two points in third place.

Description of the match Barcelona vs Dynamo Kiev

Barcelona opened the match and there is no substitute for winning after two consecutive losses in the group.

Barcelona dominated the match and almost scored early in the second minute from a cross by Jordi Alba, but Dest turned it header over the crossbar.

And reverse the course of the match, Dynamo Kiev almost scored in the twelfth minute, but the ball hit the Barcelona defense.

In the 18th minute, Luke de Jong missed a goal after receiving the cross ball with a header, but it passed next to the post.

Barcelona continued to dominate the ball in search of the opening goals in the current edition of the Champions League.

Depay passed the ball to Dest in the 35th minute and fired it superbly, but Bocchan shined and turned it into a corner kick.

And Gerard Pique succeeded in the 36th minute in deciphering the defenses of Dynamo Kiev after receiving Albas cross from outside the penalty area, and the Catalan defender met it with a right-footed shot into the net.

Barcelona started the second half with two offensive substitutions, with the participation of Philippe Coutinho and Ansu Fati, instead of Luke de Jong and Mengueza.

Barcelona continued to control the ball and almost scored the second in the 53rd minute before Fati missed a goal.

Memphis Depay fought over the ball and passed it to Fati, who received it and behind him the goal, and instead of passing to the unmarked Sergio Busquets, he shot it behind the back, but it passed next to the post.

The meeting calmed down in the last half hour with Barcelona controlling the ball, but without real attacks.

Dynamo Kiev relied on the counter-attack, but did not succeed in penetrating the Barcelona midfield and defenses.

Barcelona raised its score to 3 points in third place after the end of the third round and still needs a new victory against Dynamo Kiev in the fourth round match.

Barcelona will visit Dynamo Kiev on November 2, in the fourth round matches.

These were the details of the news FilGoal | News | A move that preserves hopes..... for this day. We hope that we have succeeded by giving you the full details and information. To follow all our news, you can subscribe to the alerts system or to one of our different systems to provide you with all that is new.